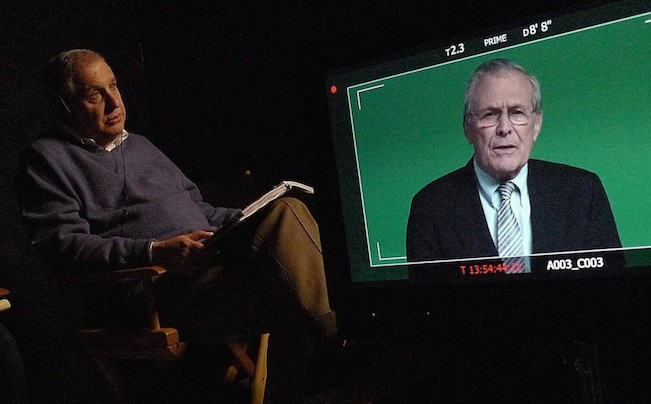 After a February screening in Boston, a questioner led Errol Morris to this insight about the circumlocutions of the subject of his latest film, Donald Rumsfeld: he speaks fluent Jabberwocky. Rumsfeld prides himself on his history of battering underlings by memo, dictating his every scrap of inkling of thought, tens of thousands of them, soft, insistent patterning of conviction onto others, via what he calls “snowflakes.” This led Morris to tweet his own perfected snowflake: “All mimsy were the unknown borogoves And the known mome raths outgrabe.” Lewis Carroll’s nonsense poem runs a mere 167 words, but “The Unknown Known,” Errol Morris’ interrogation of George W. Bush’s Secretary of Defense and a principal architect of the most recent, failed Iraq War, runs 105 minutes (drawn from thirty-three hours of interview). For Rumsfeld, language is for self-justification, obfuscation and condescension. Reciting memos, recollecting memories, Rumsfeld is steadfast and unflurried: this is how it occurred. Even when Morris or the film itself presents a contradiction, he will not be moved. Rumsfeld reveals his strength, which is also his failing, through semantic games, played as he offers up gleeful vampire smiles, baring pointy incisors, grinning at his own terrible jokes. He fashions himself as an aphorist, a master of the epigram, yet almost every utterance is built on internal contradiction: “If you wish for peace, prepare for war” is one; “Belief in the inevitability of conflict can become one of its main causes,” another. A chunk of “The Unknown Known” gives us Rumsfeld reading aloud from his many snowflakes, including the one that gives the film its title: “There are known knowns. There are known unknowns. There are unknown unknowns. But there are also unknown knowns—that is to say, things that you think you know that it turns out you did not.” 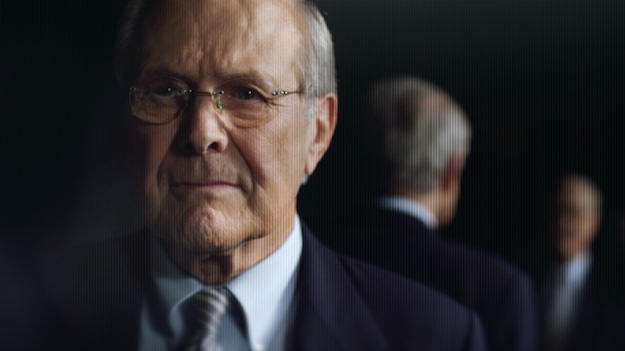 “The memos give us a way of looking inside of his head,” Morris has said. “I saw this as a chance to do history from the inside out, using the memos as a way of exploring the disjunction between how Rumsfeld wants to be seen, how he wants people to think of him, and who he really is and what he’s really done. The opportunity for him to read these memos, contextualize them, discuss them with me, was, to me, the most powerful reason for making the film.” One of Morris’ visual motifs is superimposed dictionary passages—Rumsfeld often told his perceived lessers to look up words for which he has his own definitions. Most haunting is a recurring image that we first see at the beginning of “The Unknown Known”: as far as we can see, without a horizon line, and from one side of the widescreen frame to the other, there is limitless open sea, its blue-green surface churning slightly from wave and from wind. What lies beneath?

Rumsfeld, superficially, is a tougher nut than Vietnam-era Secretary of Defense Robert McNamara was in Morris’ Oscar-winning “The Fog Of War.” McNamara was perhaps ready to express remorse, wanting to be heard. Rumsfeld hears a single voice: his own, just as he did all through the years of pulling levers at the White House in the Nixon, Ford, the man about the actions of the most recent Iraq war, but the intelligence is mismatched: Morris has questions, Rumsfeld has quibbles, and most of what he gets from the man are those infernal little grins that someone must have told him in his youth were very, very cute. The man who’s wielded all this power all his life seems to think that he’s impish, that he’s a mere scamp.  “The Unknown Known” is a high-powered game of cat-and-mouse, but by the end the eventual winner is not Rumsfeld, not even Morris, but history itself. All that lingers of Rumsfeld is another of Lewis Carroll’s wonderful inventions: an infernal smile all too reminiscent of that of the Cheshire cat. 105m. (Ray Pride)

“The Unknown Known” opens Friday, April 18 at the Music Box. The trailer is below.