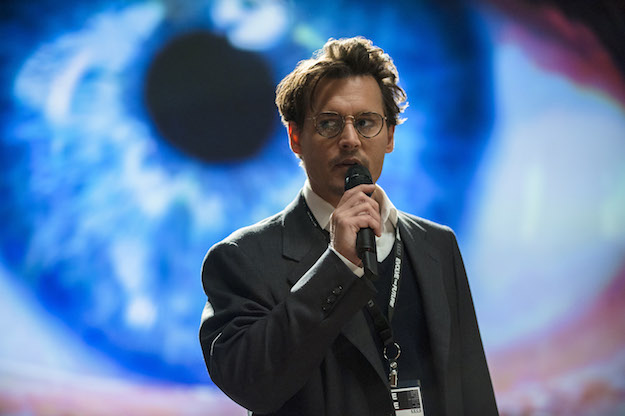 The lasting mystery of “Transcendence” is why it fails so completely, starting with its title. It could have been called a dozen other things, including “Singularity,” “Technophobia,” “Perturbia,” “Who, Me, Frankenstein?” or, maybe, “An Inconvenient Bust.” The first feature by cinematographer Wally Pfister (“Inception,” “Moneyball,” “The Dark Knight Rises”) suffers from a script aiming for present-tense future shock  that mashes up an unholy hybrid of  movies past and clichés everlasting, notably “The Lawnmower Man” and “An Inconvenient Truth.” Eight, ten minutes in the only hope was for the movie to gain a pulse and become deliciously bad. I slouched further in my seat. [Plot details follow.]

RIFT, a “terrorist” group of scraggly youths headquartered in a production-design-ready Craftsman bungalow, take neo-Luddism to deadly extremes, murdering artificial intelligence luminaries around the world as Johnny Depp’s “Dr. Will Caster” is presenting a kind of TED talk about his intentions of creating a knowing, omniscient intelligence that will change, well, why would you ask? It will change everything. The “radicals” are sloppy satire of the Occupy movement, which “The East” managed to contemplate with fewer blurts of cartoonishly binary condescension. For the moment, Caster gets off with only being shot with a polonium-tainted bullet (a tactic usually ascribed to the Russian security forces in murders outside that country). But what might happen to his ideas? Especially if his memories are uploaded to… the internet.

When Caster passes, he is first reincarnated as a C-prompt, doing lines of code in the aether. His wife, Evelyn (Rebecca Hall) is concerned, but sure knows her firmware from her software: “I think he’s still fragmented, I’m going to run a diagnostic.” Yet the holographic Caster becomes sufficiently sentient to consume all the data of the world without hiccuping, including millions and millions of dollars garnished by rigging the world’s markets through high frequency trading. (The scale of that crime is never addressed, which may be the movie’s most plausible element, beyond the usual, crippling implications of post-9/11 paranoia.) Fond memories of Keanu Reeves in “Johnny Mnemonic” intoning, “I had to dump a chunk of long-term memory—my childhood” do not supplant “Transcendence”‘s grim pastiche. (“Why so Siri?” someone ought to have asked.)

Depp’s performance is unaccountable—present, but not accounted for—quickly marked by his affectation of the marble-mouthed 1950s-hipster timbre of fellow Kentuckian Hunter S. Thompson’s speech. Even before his character’s non-virtual die-off, his enunciation is deadly, like Al Gore attempting to speak immediately after root canal. Lying in bed with lank dreadlocks of Ethernet cables, Caster spells, “Y’know, ‘m, uh. deadman.”

Vast sums of money roll in from off-screen and months pass in the desert town of Brightwood that Evelyn commandeers, which recalls a well-known art community in Texas, solar panels are erected in terateratera-watt array to feed their vast experiment: it’s a DARPA Marfa as well as daffy badness. Eventually, the pixelated pasha begins to hold the medicinally messianic hope of the characters in “Elysium”: with these powers, the halt and lame may be cured, and they will come to me.

At some point in the post-production, “Transcendence” must have become unmoored from higher aspiration, from larger themes of knowledge, personality, belief, as dour doings and dubious tech-speak take the reins. Instead of going loop-di-loop in its most ding-dong moments, “Transcendence” falls back on its own virtual memory of movies greater and lesser, like, well, “2001: A Space Odyssey,” “THX-1138,” “Colossus: The Forbin Project,” “Freejack,” “Demon Seed,” “Altered States,” “Gattaca,” “A Beautiful Mind” as well as the work of sculptor Cornelia Parker. (I would have settled for a beautiful mindfuck.)

The filmmakers’ skills may be in the right place, but the talent is elsewhere. Shot on film by Jess Hall (“The Spectacular Now,” “Hot Fuzz”), “Transcendence” loses track of the larger picture. Cluttered set dressing and loose, yet still largely acute widescreen compositions impress but are never more than decorative. Motifs rise in recurring patterns—traffic lights that blur and shift in anamorphic display; drops of water form and shimmer along greenery in a garden, then blend with other drops as if meant to illustrate the “singularity” the film does not; a succession of settings where corridors or arrays extend to the horizon more comprehensively than even the largest IKEA warehouse on earth—but plot complications rest heavily upon the eyelids. There’s a clatter of inappropriate detail in too many scenes, such as when an important piece of exposition reels out in front of a large flatscreen yet the words “Colorectal Cancer” are festooned on the other side of the character’s head. Still, Pfister and his cinematographer excel with hair: Depp’s multiple mad tousles and fetching forelocks are matched by the notably stylized hairstyling of each character. (The movie’s most heart-stopping instant may be one where Rebecca Hall gives a slight toss of her hair in studied sunlight.)

The presence of Cillian Murphy as some kind of government agent evokes the grimier apocalypse of “28 Days Later,” yet Pfister unaccountably chooses to hide the wellsprings of his malefic and haunted blue eyes behind… sunglasses? But other accessories obtain: In a timeline that zigzags over the course of months, Rebecca Hall’s character excels at keeping her lovely, well-cut white blouse clean of New Mexico dust while her cute, simple espadrilles ensure that she is never taller than any apparition of her husband. With Paul Bettany, Morgan Freeman, Kate Mara, Cole Hauser, Clifton Collins, Jr. 119m. Widescreen. (Ray Pride)