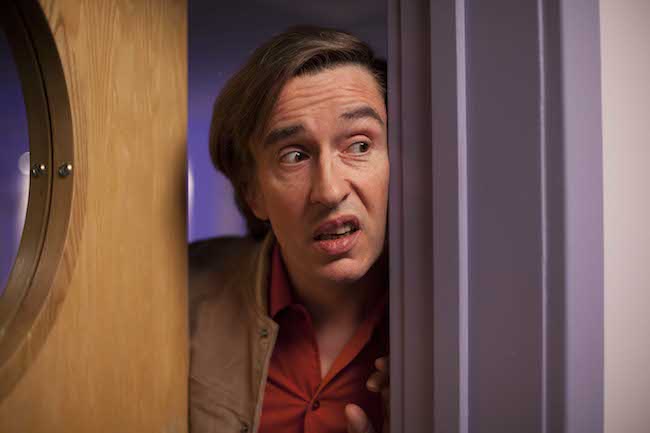 First, do no charm. Steve Coogan may be the most accomplished practitioner of the comedy of mortification since Jerry Lewis: even at his most knowing and hilarious moments, the instinctive reaction is to recoil from his creations. For the feature debut of his long-on-the-slide creation of the past two decades—originally “Alan Partridge: Alpha Papa” on its British home ground—Coogan, his co-writers Rob Gibbons, Neil Gibbons, Armando Iannucci and Peter Baynham and director Declan Lowney manage to elevate spoof and spite to heartful hurt. Bluff-and-bluster broadcaster Alan Gordon Partridge knits the pettiness of us all into a truly ill-fitting suit, but the “Alan Partridge” movie manages to discover a middle-aged heart beneath the loud patterns. It’s the character’s best incarnation of the needling narcissist since the heyday of chat-show sendup “Knowing Me, Knowing You,” and an action movie comprised almost entirely of inaction. “Dog Day Afternoon” is a movie the filmmakers cite as influence on the story’s hostage-taking premise, and Partridge comes to know failure on a reasonable scale. Or perhaps approaching the level of Mike Leigh, if at a dull roar. Start with Partridge’s latest berth, DJing at “North Norfolk Digital Radio,” hoping to make some “radio gravy.” Only idiocy could possibly ensue. Coogan knows the role inside out, and some of the biggest of the film’s many big laughs come from his full-on physical habitation of the character. Some of the England-centric punchlines may well be indecipherable, but “yes, that is my damn todger.” The BBFC censorship board helpfully cites “moderate and mild bad language, including ‘twat,’ ‘whores,’ ‘shit,’ ‘bastard,’ ‘dick,’ ‘arse,’ ‘sod,’ ‘sluts,’ ‘balls’ and ‘hell.’” Good on you, Alan Partridge.  With Colm Meaney, Felicity Montagu, Simon Greenall, Sean Pertwee, Anna Maxwell Martin, Nigel Lindsay. 90m. (Ray Pride)

“Alan Partridge” opens April 25 at Landmark Century. The opening scene is below.