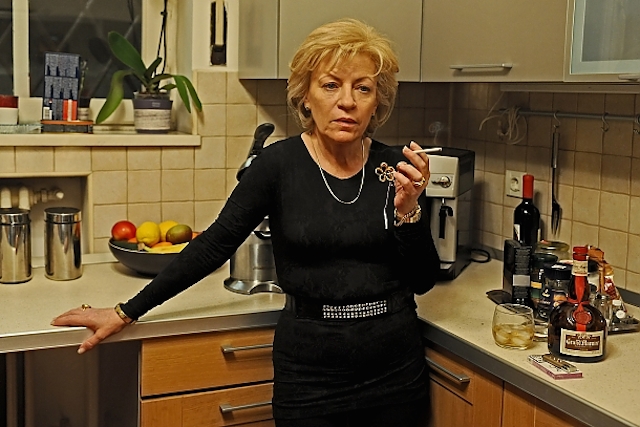 Calin Peter Netzer’s “Child’s Pose” (Pozitia copilului), Romania’s entry for the 2013 Best Foreign Language Oscar, is a punchy thriller and sweetly bleak tragicomedy about a wealthy architect (brilliant, incendiary Luminita Gheorghiu) ruthlessly protecting her grown son (hangdog Bogdan Dumitrache) after his arrest for running over a fourteen-year-old boy in modern Bucharest, decades after the fall of Ceausescu and the rise of capital. Netzer is ruthless, too, as one would hope from a contemporary Romanian director: this is a deep, dark family drama, with emotions both submerged and spoken aloud. Personal and historical subtext simmer. Pauses and silences are merciless. The corruption of the bourgeois is a given.

The controlling, hard-smoking, infernal presence brought by Gheorghiu, also exceptional as the forgiving, angel-of-mercy nurse “The Death Of Mr. Lazarescu,” is electric. Like the film itself, she shoulders a mighty weight of implication: she’s much more than an angry, disaffected mother. Netzer doesn’t explain, he exposes. (Exposes like an unshielded live wire.) The last shot is as perfectly shaped and beautiful as a freshly forged chisel. Bare your heart. The whip-smart, sphincter-tightening script is by Razvan Radulescu, who has contributed to “Mr. Lazarescu,” “Tuesday, After Christmas,” “4 Months, 3 Weeks and 2 Days,” and “The Autobiography of Nicolae Ceausescu.” Winner of Best Film at the 2013 Berlin Film Festival. With Florin Zamfirescu, Ilinca Goia, Natasa Raab, Vlad Ivanov. 112m. (Ray Pride)

“Child’s Pose” opens Friday, April 25 at the Music Box. The trailer is below.