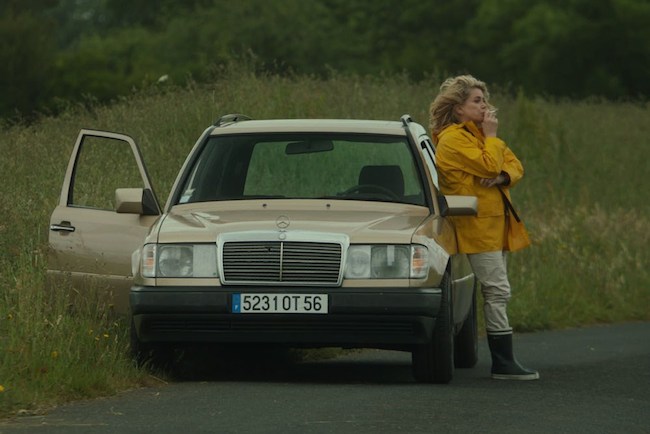 (Elle s’en va) Emmanuelle Bercot’s “On My Way” is one more vehicle for ever-plucky, ever-prickly actress Catherine Deneuve, who, at the age of seventy, is still capable of marshaling the concentration to persuasively inhabit a star vehicle. Problems erupt for Bettie (Deneuve), a former beauty queen in her sixties in a small Brittany town, left alone by a lover, stuck with the problems of her family restaurant, who hits the road and doesn’t look back, at least not literally. She’s a mother, a daughter, a grandmother, yet Bettie’s like the legendary American guy of urban legend who goes out for smokes, then decides to hightail it away from it all. Sending her senior character into a series of illuminating encounters, Bercot also finds small details that reinforce the film’s fabric, including Rufus Wainwright’s “This Love Affair” brooding across a scene of momentous decision and the sudden craving for, wouldn’t you know, a cigarette. The evocations of other understated dramas from Deneuve’s filmography, including the many films by André Téchiné (“Ma saison préférée,” “Les Voleurs”) are worthy parallels. Bercot starts with a role for a mature woman and provides Deneuve one for a great actress to showcase her lowercase gifts and talent for indicating tenderness. Plus, Bercot is willing to tinker with tone: the mood can range to the extremely whimsical. With Nemo Schiffman, Gérard Garouste, Camille, Claude Gensac, Paul Hamy, Mylène Demongeot, Hafsia Herzi. 113m. (Ray Pride)

“On My Way” opens Friday, April 25 at Landmark Century.