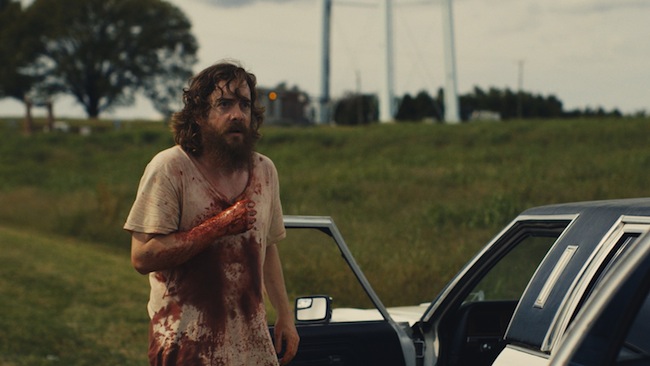 Old story goes that one Wes Craven movie or other, or maybe another, ratings board refuses an “R” for the present cut, telling the filmmaker, “your film is filled with relentless terror.” Isn’t that my job, Craven was supposed to have replied. Writer-director-cinematographer Jeremy Saulnier’s exquisitely machined “Blue Ruin” is tense from the get-go, from start to finish, amen, and provides a sustained rush something akin to “relentless terror.” Dwight (gifted physical performer Macon Blair) is an outsider, homeless, scrabbling through small feats of survival, who returns to his childhood home to right a wrong from decades ago when a killer is released from prison. The righting will be bloody, and he will be good at only some of it.

In Saulnier’s work as a cinematographer only, like Matt Porterfield’s “I Used To Be Darker,” nuanced lighting is used to gently drape quiet drama, whereas in “Blue Ruin,” a revenge thriller, the work is behaviorally nuanced, vitally designed, framed and cut, blue-to-bruise blue-to-beyond-bruise and even at its leanest moments, rocking with brooding unease. Dwight goes about the particulars of his day, and no matter how quotidian, they sing with the potential of malice. The suspense comes from how soon, how exponentially, he might further fuck things up. “Blue Ruin” does not disappoint in that regard, either. Saulnier ditches the patter and deals out the splatter. With Amy Hargreaves, Bonnie Johnson, David W. Thompson, Devin Ratray, Kevin Kolack, Eve Plumb and a Pontiac Bonneville belonging to Saulnier’s parents. 92m. (Ray Pride)