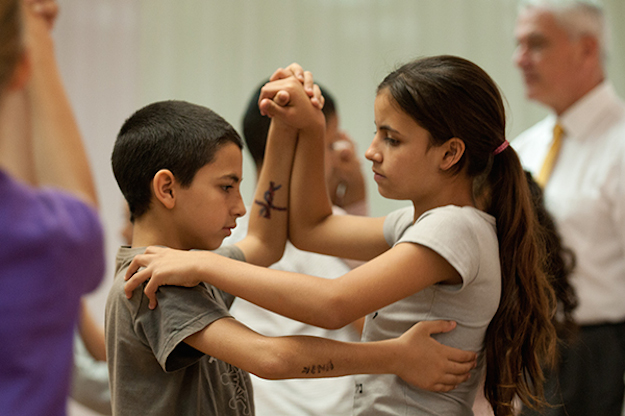 Hilla Medalia’s “Dancing In Jaffa” documents the return of ballroom champion Pierre Dulaine to his home city of Jaffa for the first time since childhood emigration. He’s spent his life as an educator, introducing a ballroom dancing program in New York City Schools in 1994 that affected an estimated 350,000 children. An earlier documentary, Marilyn Agrelo’s 2005 “Mad Hot Ballroom,” encompassed the work of his not-for-profit, Dancing Classrooms.  Now Dulaine has another dream to fulfill: teaching ten-and-eleven-year-old Jewish and Palestinian-Israeli children to learn Latin dance together in a ten-week course. Complications ensue, and how. There may even be a dance competition! Everything comes apart with understated observation, and then together again, with slick, soothing charm: in rumba we trust. As strong tea goes, this one’s soothing chamomile. 84m. (Ray Pride)

“Dancing in Jaffa” opens Friday, May 2 at the Music Box. A trailer is below.