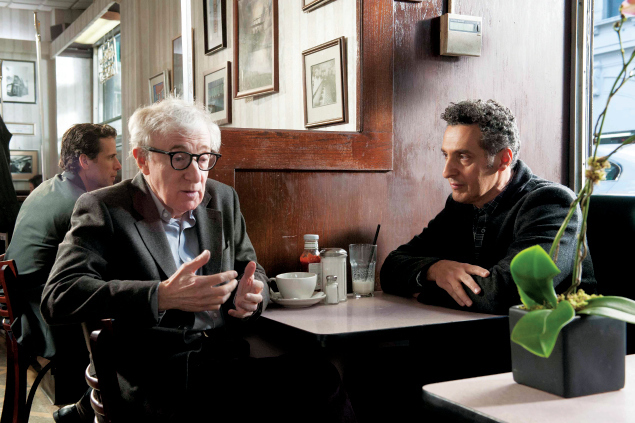 “Fading Gigolo” is exceedingly odd and a discomfortingly inauthentic comedy of sorts from writer-director John Turturro, about a florist, Fioravante (Turturro) who becomes a “ho” with the encouraging of his friend Murray (Woody Allen), who’s shuttering his New York City bookstore. Weirdly, the film turns into a second enterprise, a drama about the fate of an Orthodox widow played by Johnny Depp’s ex, Vanessa Paradis, who’s also worshiped from afar by her childhood friend, Dovi, a Hasidic policeman (Liev Schreiber).  (Paradis, full-eyed, still, gap-toothed, provides an impassive mask for Dovi, and later, Fioravante, to project shortcomings onto.) Along the way, Turturro tries to invest his bonsai-shaping empty vessel into a character akin to Chance the Gardener from “Being There,” someone whom disappointed women (Sharon Stone, Sofia Vergara) can look upon and find themselves transformed.

Second-rate, perhaps even second-grade smut issues from Allen’s mouth. (As well as not-so-lovingly-limned lines like, “This is Grey Goose, it doesn’t leave a trace on your breath” as he toasts his protégé from a flask.) Stone is often left by herself at the end of scenes to mutter “Fuck” or at least once, “Aw, fuck.” “Fading Gigolo” is never weird enough to rise to the occasion of full-on folly. Still, there’s more technical incorrectness than political incorrectness. (Unless you count a small black boy telling his mother, Allen’s character’s partner, out of nowhere, “Mom! My butt hurts!” after which she reminds him not to eat spicy food.) Turturro’s earlier “Romance & Cigarettes” gets some savor from his brash dreaminess, but the pile-on of implausibility of “Fading Gigolo” and dreadful music cue after dreadful music cue suggests the worst indulgence of his collaborator, Spike Lee. The influence isn’t digested, and hardly nuanced. And the threesome that the characters played by Stone and Vergara had wanted turns out to be a stilted paean to love and clumsily bumping uglies from behind. Still, its strange flavor lingers, which is why I’d recommend it to those patient enough to contemplate such an earnest, cracked project for its flagrant, fragrant failure. 90m. (Ray Pride)