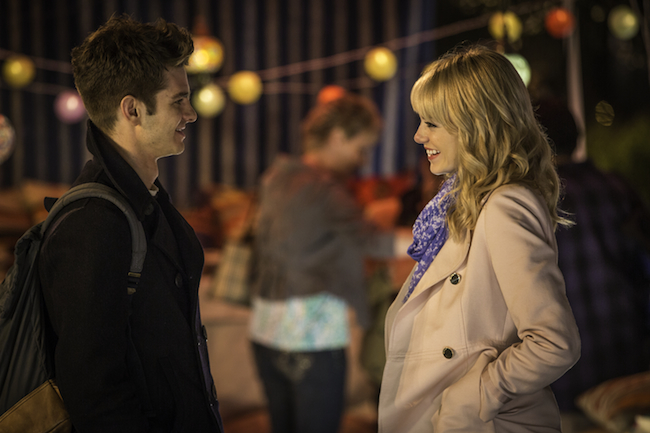 Where did Spider-Man come from? What is Peter Parker’s primal trigger to become a vigilante for good? Wow! Can’t believe I stumped you! Yet another explanation’s ready for your perusal in “The Amazing Spider-Man 2.” Despite moments of drab familiarity, there are gleaming little instants in director Marc Webb’s third feature, not confined to the goofy, charged chemistry between leads Andrew Garfield and Emma Stone. We’ve landed in the middle of another series of Manhattan canyon aerial web-slinging adventures that look, and more distressing, feel increasingly alike. Fallen fathers and foul deeds pile up along with oh-so-many subplots and villains, a clutter of characters and clatter of boom-bang-boom.

The best moments, when Webb (“(500) Days Of Summer,” 2009) is able to pause the freight train, include a weightless instant in which Spider-Man, wending his way across Manhattan, arrives at the top of an arc, mid-air between skyscrapers, high above the asphalt, and there is a balls-rising-up, near-orgasmic pause before simulated gravity and emulated physics bring the boy down to earth.

But then what truly brings the enterprise down to earth are snap-happy wisecracks squeaked out in near-falsetto by Spider-Man in distant approximation of the word-balloons of the original 1960s comics. (You don’t want to know and, if you see the movie, you won’t likely remember them.) Other dialogue clanks, too, even the largely subpar romantic banter, but also including jokes about “Jeopardy!”; “I’ve seen the grid specs and I know how to reset the whole thing!”; and “Whatever! He wears spandex to rescue kittens from trees!” 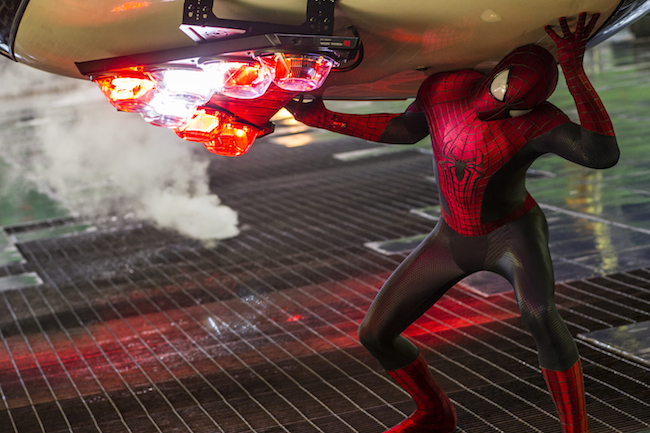 Still, “The Amazing Spider-Man 2” is intermittently lovely in all its superfluity, and the moment Peter Parker jaywalks across 14th Street in Union Square through traffic, lost to the magnetic pull of Gwen Stacy’s mock-pouting face, arriving in a frame with Forever 21 above their heads? It’s daffy. (That’s good.) Product placement, sure, but adroitly deployed. “You gotta find a more annoying laugh,” he says, she laughs, well, snorts and laughs, and he says, ‘That’s still adorable.” Peter and Spidey both stalk Gwen after a dramatically convenient breakup, one concession to a creepy constant of the worst modern romcoms. (But it’s picturesque, Spider-Man from a dozen stories up looking directly down toward the top of her redhead and her sprightly pink saddle shoes.) But the two tease, their grins dazzle. Their flirtation is freighted yet weightless, as if presaging all the most precious fondling and fantastic fucking in the world.

The melting chemistry between Stone and Garfield is awe-inspiring. These two? It’s gaga-goo-goo dada from the get-go. There have been many, many movies where the leads were reported to be a couple where there’s no on-screen chemistry whatsoever—cf. Ben Affleck and Jennifer Lopez—and you can’t believe they’d ever met, let alone had sex. If anything ever happens to Gwen Stacy, Sony could do worse than pair Garfield and Stone within the folds of a true screwball comedy, especially with her slightly raspy intonations evoking, if only distantly, the likes of Margaret Sullavan and Jean Arthur: “You do this to me again—and again—and again—”—in beats that constitute small, held breaths.

Pleasing quiddities etched in the margins of the film’s decor are the walls of Peter Parker’s bedroom, which brandish a poster of Burmese activist Aung Suu Kyi, a David Bowie “Man Who Fell To Earth” graphic, a bold red “Blow-Up” one-sheet—a nod to his work as a photographer—as well as a blow-up of the cover of the 1962 paperback of Jorge Luis Borges’ “Labyrinths.” The room’s piled and littered with stuff, also including books by Dave Eggers, Kurt Vonnegut, John Irving, as well as copies of “Infinite Jest,” Jonathan Lethem’s “The Fortress of Solitude.” Allusions to “The Shining”—an office floor plan—and “Altered States”—a man having his consciousness wracked in a submersion tank, viewed on video monitors—also racket about. Not to mention a jaw-dropping last-minute visual reference to both Batkid and the unknown man of Tiananmen Square that likely will not elude the heavy glance of Chinese censors. If only this movie could have fully refracted those influences, as well as co-writer Roberto Orci’s publicly expressed skepticism toward power and love of submerged histories, which persists as glimmers of politics and paranoia amid the script’s pulped pop. Some of the bits of the real world that rest within the fantasy include economics: Of not being paid well or on time for his photographs, Peter cracks of the unseen J. J. Jameson, “If it was 1961, he’d pay me a fair wage.” And, to search the internet, Peter’s a true modern superhero; he uses Google, unlike all the films that brandish the might-as-well-be-apocryphal search engine Bing.

Oh, all those villains? Jamie Foxx is promisingly weird before getting strapped into electron-spinning CGI, becoming an electromagnetic Golem of kilowatts and class frustration and elemental fury. And his Electro is key to a bright, loud, sustained demolition derby in Times Square, of scale if not topographic precision. As a further incarnation of Peter Parker’s high school pal Harry Osborn (and the Green Goblin), Dane DeHaan excels at being the younger, scruffier Leonard DiCaprio. There are also brief bursts of Paul Giamatti, spluttering a brute, cod-Russian accent and sporting the facial tattoo that’s soon to be the summer’s rage. Fine actress Felicity Jones has even less screen time, and provocatively, not a damn thing to do. Nuttin’. Well, there is one small smile in medium close-up. It lasts a second. Our loss. 142m. Widescreen. (Ray Pride)

“The Amazing Spider-Man 2” is now playing in 3D as well as twentieth-century formats in some locations.