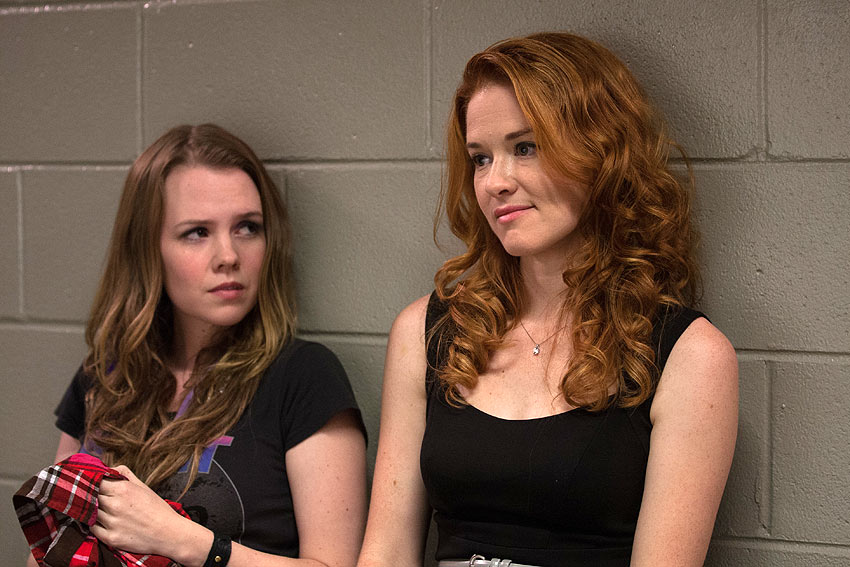 “Moms’ Night Out,” an Apocrypha version of “After Hours” for a female, evangelical audience, aims for lordly laughter within unsaintly slapstick, and its barrage of comic conniptions could become the latest success among “faith-based” films now rolling out from the studios on a regular basis. Peaked, frazzled Allyson (Sarah Drew, “Grey’s Anatomy”) is a young mother as overextended as husband Sean (Sean Astin), who longs for one simple thing: a Saturday night where she and two female friends from her church can put on their heels and go out for a nice dinner on the town. Allyson’s a pill from the very first, high-strung and haggard. The bright, unnuanced cinematography makes her look like a twelve-year-old with laugh lines. “I’m a blogger,” her Adderall-inflected opening narration intones, “I’m a mommy blogger,” like a voice rising up from five-six years back, almost to the mid-2000s. While swearing is off the books, the word “murder” rises up with shocking frequency, as in “I am a fairytale-murderer!” These women are chafing at their roles even as they embrace them fervently. (The women have a refrain of gratitude, addressing one another, “You’re a servant.”) Co-producer Patricia Heaton (“Everybody Loves Raymond”) is the voice of addled middle-aged reason, and Heaton’s husband, David Hunt, is on hand as a wide-eyed taxi driver with an English accent almost as broad as the effeminate mannerisms of the restaurant manager who won’t let the girls just have fun on their Groupon.

Allyson and her friends aren’t caricatures, per se, but in the behavior-reinforcing fashion of the simplest situation comedies, we’re shown a deeply unflattering portrait of brittle, hostile, hustling, neurotic modern American suburban control freaks. Who ought to listen to their man, and the Father. Why don’t they listen to their man, and the Father? Sean has his own verbiage: “I use videogames to transition from work stress.”  Their son is disturbingly obsessed with shoving his head in the toilet, any toilet, and since he’s described as having a large head, winds up wearing successive toilet seats as a crown, which, gratefully, is described, but not shown. (Plus, “Gangnam Style,” car chases, taxi-ramming, Donny Osmond jokes and Taser humor.)

A few sprinkles about believing in the Lord because he believes in you hardly reassure: there are measly terrors here to surpass those Martin Scorsese summoned in his dark-night-of-the-soul black comedy. The bountiful music score jangles to similar effect. Among the cavalcade of endings, the true heart of the film is in the capable croak of musician Trace Adkins, playing “Bones,” a goodhearted tattoo-artist-motorcyclist who befriends and protects the women through baby endangerment, crossed wires, miscommunication and shrill shouting. Bones relates a story about his family, about his church and about Christ, and the filmmakers leave the camera be: it is a moment of quiet behavior and gentle witness, of simplest, godly wisdom that blooms from the fury of the rest of the overheated comedy. It’s dignity within the Godsploitation. The rest of the bluster and fluster are washed away. Allyson may return to her blog of solemn, self-affirming platitudes—“I’m a mess, a beautiful mess, and I’m his masterpiece, and that’s enough”—but Bones is the man. Directors Andrew and Jon Erwin’s first film was 2011’s “October Baby,” a harsh drama about the result of a failed late-term abortion. 98m. (Ray Pride)