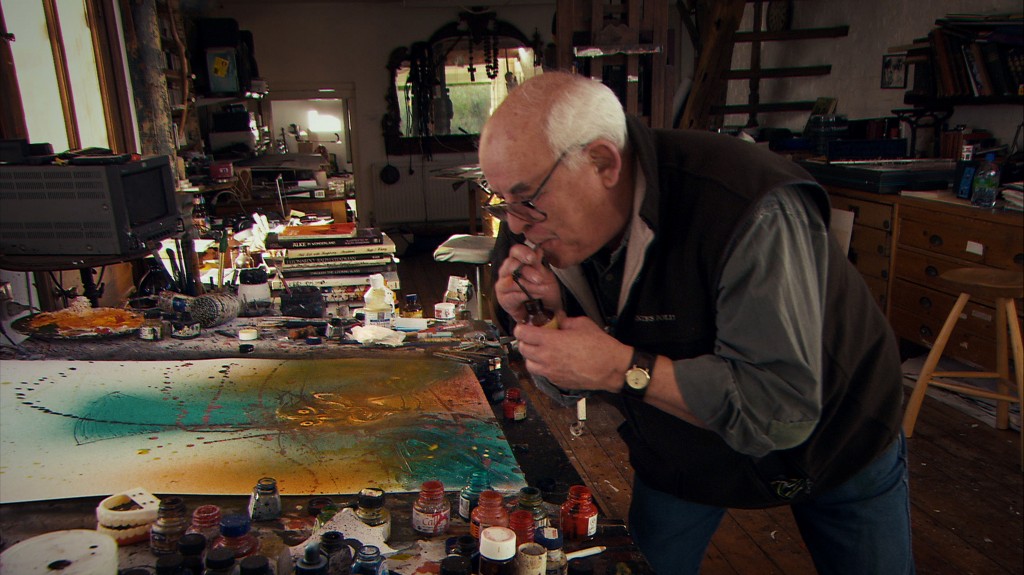 A fifteen-year labor of love as well as a fifteen-year labor of personal pounds sterling, Charlie Paul’s “For No Good Reason” captures the personality and process of the great illustrator Ralph Steadman, best-known for the caricatures that accompany the work of Hunter S. Thompson. There’s a stirring sense of the rare vitriol and vigor that’s kept him going for seventy-seven years so far.

Paul and his wife Lucy kept the project going for years alongside many television documentaries about artists, and “For No Good Reason” benefits from those years of experience. The film also profits from a willingness to employ detailed sound design and to texture images to reflect and refract the art. Steadman and his friend Johnny Depp, lingering in the painting studio, are the only present-tense figures seen whole. Other figures, like Rolling Stone publisher Jann Wenner and Terry Gilliam, are projected against textured backgrounds. The talking heads become artifacts. A device like that could turn into a tic, but along with the examples of his morally invested, vivid work and a bursting song score, it gives a vital sense of the artist’s creative pulse. It’s a kind of palimpsest, like writing atop writing, much after the fashion of the techniques Steadman is seen using to create his profuse, sprawling, often howling images.

There are many gems of earned wisdom, both spoken and demonstrated through the prowess of the man’s process in conjuring his righteous satires, including “There’s no such thing as a mistake, it’s just an excuse to do something else.” And there’s just enough archive footage of Thompson to capture his trickster side, but it remains from Steadman’s perspective. Decadent and depraved, that’s the HST story. The artist traffics more in conscientious witness. Still, the pair bicker in some personal footage we see, and convivial prickliness comes through, and you can sense how HST’s verbal loop-the-loops did take dragon’s wing through the artist’s pen.  Toward the end of the film, Steadman remains positive and productive, but he grows melancholy and even questions the worth of his life’s work after Thompson leaves the scene. Paul responds keenly with a barrage of his sensorium of images, a montage of a volume of work that contradicts any worry the man should have.

“It was a relationship rather than a filmmaking process,” Charlie tells me. “It was very much like Ralph’s art, which is, you make a mark and then the picture takes itself in that direction. And what you do is you just keep working on it. The thing about Ralph’s studio is that all his art is still there. It’s a treasure trove of 10,000 pieces of work. There was never a point where I hit a wall and said, ‘Oh, we’ve done everything here, Ralph.’ If I wanted a new subject, I’d just open a new drawer and go, oh my god. I discovered all those New York photographs that are in the film, in a box. Ralph had put those aside, mid-seventies, and he had no interest in going back there.”

“They hadn’t been seen,” Lucy adds. “He just took them as documentation, his inspiration to create some art.”

“So as a filmmaker,” Charlie says, “the journey always had fuel. Really, to be perfectly honest, the reason it was fifteen years, and not twenty, why I’m still not making it, is my brilliant producer, my wife here, decided that it was time to put some stakes in.”

Films are released, right? They run away from you like a lunatic from the asylum. They’re not finished. “Exactly!” Charlie says. “This one was released by my wife. The process continues with Ralph, I still go down, went down there last week, he still shoots the camera above his desk. I still go and get the [memory card] down. As far as we’re concerned, it’s an ongoing process, but the film itself had to come to a point where it was ready for an audience. Lucky for me, I didn’t count the money. My wife was in charge of that bit! If I had, I would have given up. It certainly wasn’t a financial arrangement, it was purely… it was very much like capturing his art [on screen]. Once you have that camera [mounted] above the desk [capturing stages of the process of a drawing] and once you’ve done a few frames, you can’t miss a frame. You can’t go away and come back and hope nothing’s moved on. So once I was locked in, that was it. I had to go on the horse and I was galloping off in a direction, driven by Ralph, obviously.”

There’s not just a wall of appropriate music on the soundtrack, but exquisite sound design. Straightaway, there’s a sound under the first images, a very specific pen nib, at a very specific weight, on a very specific piece of drawing board: from the beginning, the film hears as much as it sees. Paul nods. “George Foulgham in the UK, who worked on ‘King’s Speech,’ ‘Man on Wire,’ a fantastic man. It was lovely, everyone else felt they had to step up to the level we had set filmically.”

“The reality of it is that the production of the film was, financially, relatively a small outlay in comparison to what you see on the final screen,” Lucy says. “A lot of it was put together with short ends [the leftover film after shooting other projects]. ‘Cos we’ve got our own commercials and music romp business. We’ve got a studio, a motion control rig and our own cameras. That’s entirely to do with the way Charlie works. He’s a fiercely independent filmmaker. By the time it got to the point where we were actually finishing it as a film, we had invested so much emotionally and in terms of time, there was only one way, to do the project justice.”

“My thanks really go to the post house and the audio house in the UK who helped us limp through that void between the edit suite and the big screen,” Charlie says. “We’re a small, independent outfit. We’re proud all the collaborators also made it a labor of love.”

“For No Good Reason” opens Friday, May 16 at the Music Box.