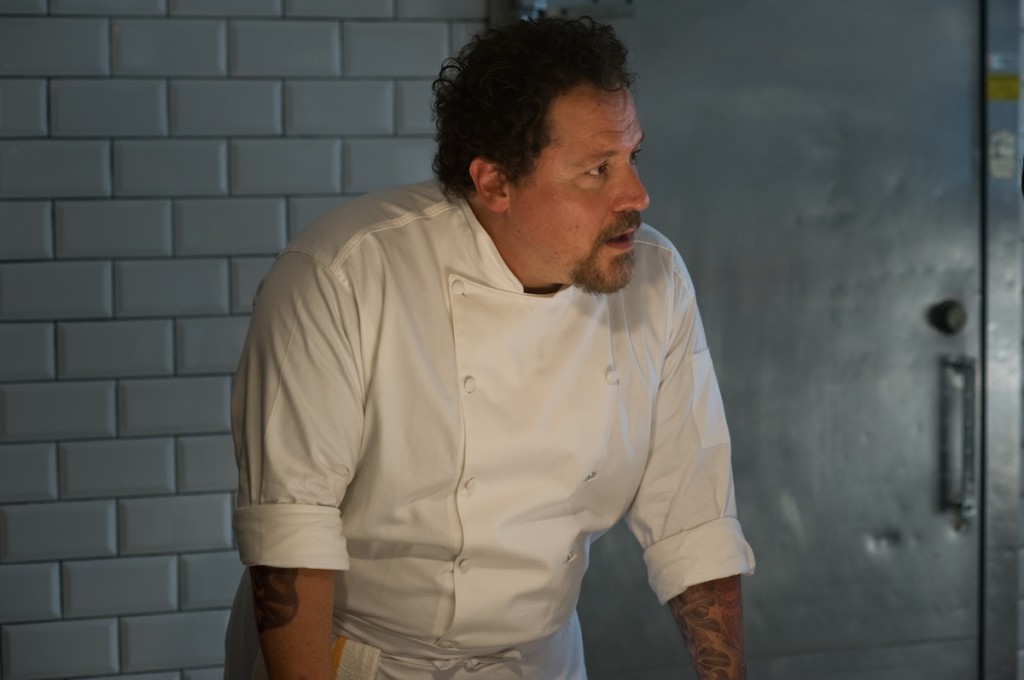 Jon Favreau’s smart, tasty entertainment finds room for father-son dynamics and a fuckload of swearing. A fuckload. Favreau’s foodie fantasia serves up chef Carl Casper, near-Schnabelesque in girth, goatee and glasses, caught between work and family, dashed ambition of youth and daily drudge in a limiting restaurant he’s been cooking at for years. (Gauloises: such a Los Angeles name for a place that’s been there forever.) As writer-director-producer-star, Favreau works sweetly and well, crafting “Chef” as small-scale, slightly-elevated fairytale, providing Chef Carl with a wealthy, lovely ex-wife, Inez (Sofia Vergara), a chipper if neglected young son, Percy (Emjay Anthony), as well as Molly, a smoky-voiced floor manager with sly eyes who sometimes brings them along to bed (Scarlett Johansson).

Johansson reduces her performances to ever-smaller details: note the smallest cock of the head, less performance than indications of synaptic reaction, and those two tattooed stars stark, one from each shoulder. (Carl’s inked, too: he has a tattoo of an impressive chef’s knife the length of an inner forearm.) Digital cinematography loves food, and the shades and hues of ingredients in every stage of preparation gleam with goodness, and “Chef”’s editing is at its finest when it demonstrates prep and prowess with sweet dispatch. Egg over easy; black pepper. Gleam. The end credits show just how much went into a grilled-cheese-making scene that is as lucid as instruction as it is eye-stinging and mouth-watering in its detailed meltingness. And those three little medallions of beef getting a spoonful of some kind of tomatillo mixture, dab, dab, dab. From large-scale kitchen to chef’s dump of an apartment, its kitchen island appropriately dressed with cookware and back issues of Lucky Peach magazine, to the food truck on which he finally escapes his frustrations, the film is also lovingly designed and decorated. Just enough to make it a movie, not so much as to make it a design-magazine layout. “Chef” also embraces the moment, or perhaps moments just past, in its conflicts between handcrafted food and virtual observation—“I know what a food blogger is, they’re haters”—by incorporating Twitter, Facebook, food blogs and TMZ-style attack videos. “Fuck Twitter,” he says, before he fucks himself with Twitter, in an unintended flame war with food critic Ramsey Michel (Oliver Platt, whose brother, Adam, is food critic of New York magazine). Michel’s withering gaze isn’t diminished by his sale of his online properties to AOL for a ton of money, nor by another website proclaiming, “Carl Casper Shits The Bed” after a confrontation that includes the classic splutter, “You just smugly fucking shit on my shit!” Without a plan, a road trip ensues, and soon enough, Carl and his sous-chef (John Leguizamo) and his bright small son are driving a new food truck from Miami back to Los Angeles. The pacing is brisk, jokey, sometimes giddy; lessons are lightly laid out, families grow closer, both the biological and the kitchen kind. Mis en scene, indeed. Here’s an unlikely compliment to a likable success: this is one James L. Brooks movie that James L. Brooks never got around to making. Workplace, extended families, secondary families, love, longing, mild nostalgia, untamable optimism, stuff that just makes you want to be a better man, woman, chef or critic. With Dustin Hoffman as an unctuous owner whose presence evokes a similar story dynamic from “Kramer Vs. Kramer,” Robert Downey, Jr. as Vergara’s spacey, successful first husband, Amy Sedaris as the tawniest of life-tanned L.A. publicists, and Bobby Cannavale, spicing up the kitchen as Bobby Cannavale must. 115m. (Ray Pride)