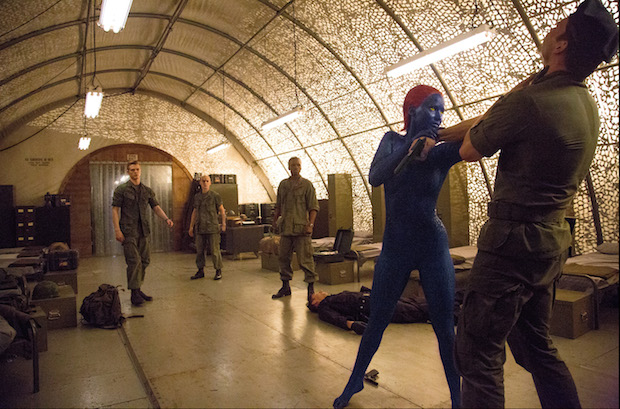 At least one reviewer who’s kept closer watch on the franchise warns, “My advice to you is to not watch the previous ‘X-Men’ films before ‘Days of Future Past’ as the continuity problems will irritate you.” What I can offer is that “X-Men: Days Of Future Past” builds its own relatively coherent adventure without leaving non-aficionados in the dark. In other words, this largely 1970s-set installment functions as a standalone movie, and one that has several unexpected scenes of superhero glee that almost seem criminal to describe, and especially the period songs used to accompany them. Still, there are enough callbacks and hints of futures to come that a preview audience often purred in muted ruffles of chuckles, indicating director Bryan Singer and writers Simon Kinberg, Matthew Vaughn and Jane Goldman did not neglect a key constituency.

The teeming cast includes Hugh Jackman, Patrick Stewart, Ian McKellen, Halle Berry, Jennifer Lawrence, James McAvoy, Michael Fassbender, Ellen Page, Shawn Ashmore and Nicholas Hoult, with a fraction of a second of a glimpse of Anna Paquin. If you know the films, you know who most of them play. If not, not. Plus, new to the craft services: Omar Sy, Evan Peters, Daniel Cudmore, Booboo Stewart, Fan Bingbing, Josh Helman and as a towering antagonist, Peter Dinklage and his resonant baritone. [Some plot details follow.] Time-travel perplexes and anomalies are dispatched with surface logic—the best ploy in making a cockamamie rapid-fire crackerjack superhero tentpole concoction—and most of the performers have moments to be larky or giddy or sweetly snotty. (For what it’s worth, Page, McKellen and Stewart are largely confined to a room in a Chinese monastery in a blizzard high atop a jagged mountain, pulling faces while awaiting certain oblivion.)

Still, the couple of super-slow-motion scenes shot at 3,000 frames a second are the wittiest, and thrilling both for comic invention and simple physical beauty in their tumbling eyefuls. (It’s the Rube Goldberg version of the end of Antonioni’s “Zabriskie Point.”) Multiple Marvel-style bits of cheekily counterfactual historical invention include riffs on the JFK assassination that keep turning in on themselves, and a 1973 where half a crowd seems to wield cameras as if it were 2014, and where everyone’s clothes seem drawn from “Mad Men” wardrobes yet to be seen. Recurrent Bryan Singer motifs include an early image of bodies seething from a mass grave, invocation of eugenics, an appreciation for a very specific manner of razor-sharp high-cheekboned male beauty, and a small, stirring speech about the outsider attributes of his characters, which even includes the phrase “coming out.” 134m. Widescreen. Reviewed in 3D. (Ray Pride)