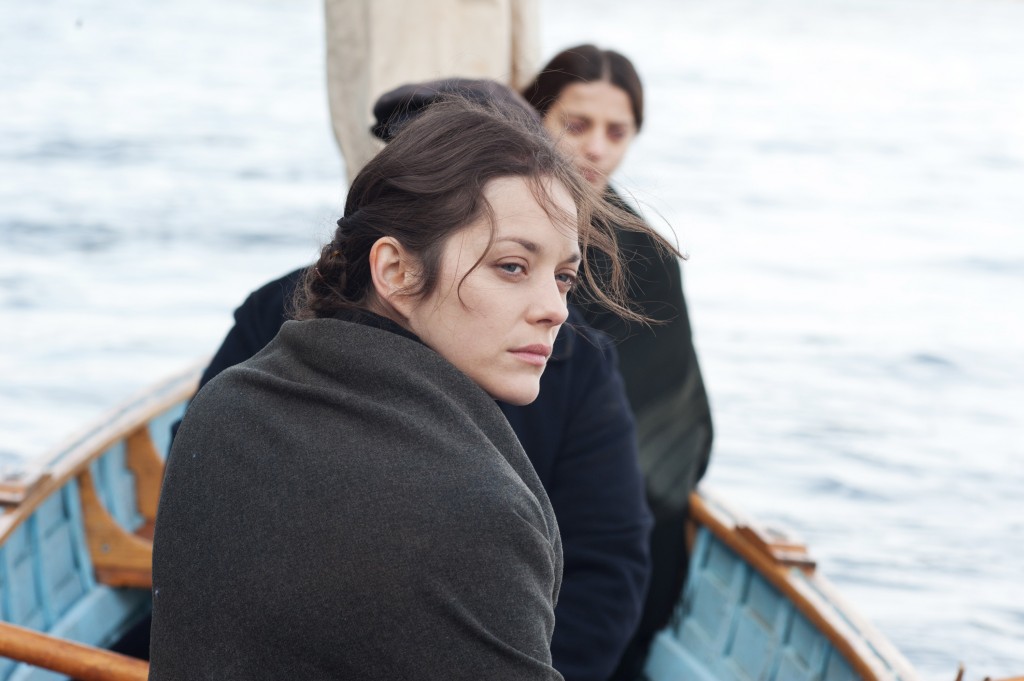 The opening shot announces itself cleanly, clearly as preamble to an epic, at least an emotional one, with the backside of the Statue of Liberty glimpsed through a curtain of mist, and a slow zoom backward revealing the back of a man in a black suit and a bowler-like hat. It’s Joaquin Phoenix, who plays Bruno, a fixer, a macher, an impresario, a cruel, even dastardly man, patrolling the ranks of women held back among the swaying lines of huddled masses at Ellis Island in 1921. Bruno will fall upon the Polish Ewa (Marion Cotillard), introducing her to the commerce of the Lower East Side, not only to a much-needed bed, to the camaraderie of women in the public bathhouse across the way, to the variety theater, the Bandit’s Roost, where he plies his trades, but to prostitution. Her sister Magda (Angela Sarafyan) is sick with tuberculosis, and Bruno tells her there is only one way to make the money in her lifetime to protect her. (The historic Bandit’s Roost, often described as the first American slum, was off Mulberry Street, and photographed in 1888 by Jacob Riis.)

A multitude of elements haunt Gray’s film, beginning with a stinging sincerity drawn from an immersion into melodrama. The writer-director’s fifth feature, and his fourth starring Joaquin Phoenix, draws, by his own testimony, from elemental emotional aspects of opera. After seeing William Friedkin’s 2009 direction of two-thirds of Puccini’s triptych “Il Trittico” at the Los Angeles Opera, Gray was inspired to write a period piece centered on a female protagonist, incorporating, as he often does, stories handed down from his Russian Jewish family. And then there’s the central silent-movie-worthy performance by Cotillard. And while her large, open eyes plead for deliverance, Ewa speaks in a specific accent—Polish, yes, but inflected with her native Silesia. Language and image blend bountifully in a scene in a confessional, where she looks upward and her face is held there for a few beats and Cotillard could almost be Dreyer’s Falconetti in “La passion de Jeanne d’Arc.” She feels damned. Tragic turns follow. But forgiveness always seems possible: the characters ladle blame onto themselves, they take the long view of the cruelty of the world and its fatedness rather than placing blame on others. Amid humiliation and degradation, characters recognize and hope to attain purity. (Gray works toward the purity of twentieth-century filmmaking classicism as well.)

Working with cinematographer Darius Khondji (“Se7en,” “Midnight in Paris,” “Amour”), production designer Happy Massee (“Two Lovers”) and costume designer Patricia Norris (“Days Of Heaven,” “12 Years A Slave,” “Lost Highway”), Gray continues his exploration of dim and dark, of golden gleam, of a kind of candle-lit or low-wattage early incandescence. As scenes unfold, the effect becomes something more than painterly affect, but simply the description of a room, in a moment, an elusive instant, pinned down long enough to capture the flicker of fear, all manner of fear, as his characters gaze toward one other.

There also might be some of D. W. Griffith’s “Musketeers of Pig Alley” here, some of the flash and filigree of Visconti there and certainly some of the dangerous rough-and-tumble friend-on-friend envy of “Rocco and His Brothers,” as well as the towering exemplar of “The Godfather Part II.” Gray himself has expressed a longing for the “austere and mystic” character of Robert Bresson’s “Diary of a Country Priest,” and yet the influence falls away through the simple, cumulative power of his filmmaking. Jeremy Renner’s magician character, the Great Orlando (born Emil), who becomes the third corner of the surely-to-be-ill-fated triangle, is inspired by an actual historical figure, but also dashes in and out of the narrative like a charming ghost. Where Bruno binds Ewa to bed and pulls her to ground, speaking always of cash, Emil climbs in windows through fire escapes, brandishes postcards of the beautiful California seaside (which, cannily, we are not allowed to glimpse) and at one inexplicable moment of implausible, fantasticated beauty, merely levitates. In a world of soot and muck and views warped by crudely annealed, light-bending, feature-distorting window glass, Emil promises life can become lighter than air, where once all that is profaned could become sacred once more.

While the locations and panoramas are limited (to effective budgetary and esthetic effect), the ghostly dreaminess of “The Immigrant” lies in its realization of the state of mind of its characters, each imbued with hope no matter how quickly they become a “soiled dove,” as Bruno coos at Ewa. These are the ones that had a hope that was handed down to generations. And yet we know that when Emil says in one of his performances, “Don’t give up the faith, don’t give up the hope, the American Dream is waiting for you!” it is as much threat as promise, but it is a threat and promise upon which our America, now, is built. It is a brilliant rebuke to the making of myth. Its heart is pure.

“The Immigrant” opens Friday, May 23 at River East, Cinemark Evanston, Showplace Icon and other theaters. The trailer is below.