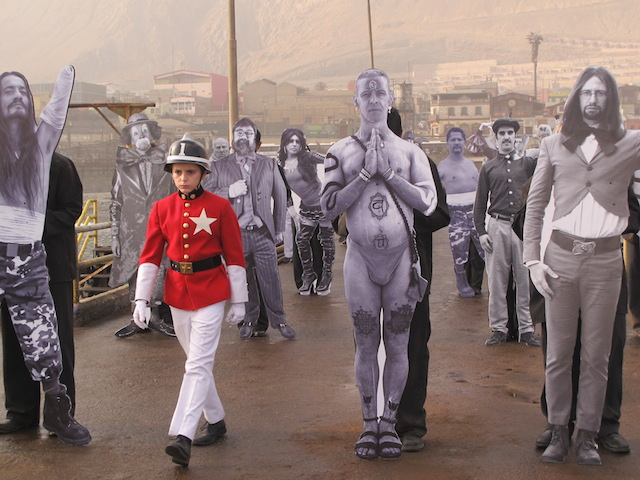 (La Danza de la realidad) Before “The Dance Of Reality,” Alejandro Jodorowsky hadn’t made a feature in two decades, but the eighty-five-year-old Chilean director’s brisk recreation of his childhood in the coastal town of Tocopilla bursts with eminently buoyant and decidedly earthy passages. In a career of films consisting largely of longeurs, Jodorowsky continues to litter the screen with what will be treasures or travesties, depending on one’s taste. The indulgent eye will witness a sensibility that remains out of time, within one protean mind. And indeed, in the rollout of the documentary “Jodorowsky’s ‘Dune,’” and in promoting his own film, the Chilean filmmaker repeated variations on “I don’t live in time. Time doesn’t exist for me.” Imagery reminiscent of “El Topo,” “The Holy Mountain” and “Santa Sangre” holds the screen: figures against rock-strewn desert; masks; clowns; crowds milling or surging beneath umbrellas; the elder auteur’s own musings and white-bearded, black-suited figure; shirtless, camouflage-trousered soldiers with missing limbs battering and battling; tattooed mystics; Jodorowsky’s mother, who speaks only in song, astride his father, guttering a geyser of piss; explicit testicle torture; uniformed corpses uttering “God does not exist” while teeming with slugs and maggots, balloons rising to the sky, paper fluttering onto the land. It’s memory less as fantasia than as vivid excrescence. With Brontis Jodorowsky, Pamela Flores, Jeremias Herskovits. 130m. (Ray Pride)

“The Dance Of Reality” opens Friday, May 30 at the Music Box.