Don’t we all want a furious, jumbled intelligence like Doug Liman’s to fashion memorable pop? The director of “Go,” “The Bourne Identity” and “Mr. & Mrs. Smith” opens the snap-pop-crackerjack visual static of “Edge of Tomorrow”—a title which sounds like a lost Powell-Pressburger film—with a teeming montage, an immersion more than exposition of how the planet has arrived at apocalyptic war. We’re battling voracious aliens called “Mimics” and a surge on the beaches of France, Operation Downfall, seems to be humanity’s only chance for survival against the onslaught from the edge of the world. The 2013 meteor showers in Russia’s Ural region are one shard of the opening’s epochal busy-ness as is the image of a mute, pop-eyed Wolf Blitzer next to a “United Defense Forces” general played by Brendan Gleeson: a cruel portrait in a fraction of a second.

Based on “All You Need Is Kill,” a novel by Hiroshi Sakurazaka, the first adaptation of which sold for as much as $3 million, the final script, after the delicate art of the rewrite, is credited to Christopher McQuarrie (“Jack Reacher,” “The Usual Suspects”) and Jez Butterworth & John-Henry Butterworth (Liman’s “Fair Game”). But after the setup, the story’s “Groundhog D-Day,” with Tom Cruise’s Major William Cage, a media officer who’s never seen battle, thrown into a time loop where he fights and dies over and over. Cruise’s every-doofus character is a great mid-career role for him, since it’s briskly business: pulling faces, widening his eyes, dying, dying, dying once again. (It’s a learning curve.) There’s dark comedy when the kills pile on, not only emulating videogame patterns, but also growing more masochistic than a shelf of Mel Gibson movies. 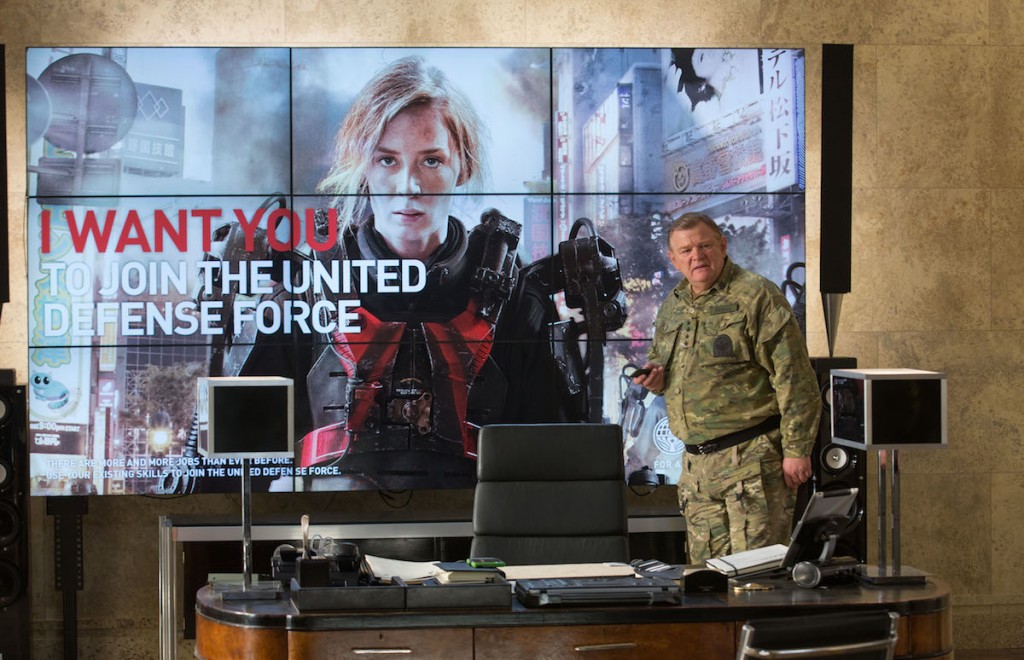 Repeated fractions of action setpieces, with key variations in choreography, maximize the substantial production value, but the editing of the intricate battle scenes must have been a mathematical affliction. There are splendidly weird details throughout, rich with resourceful zip, including plainly lunatic dialogue that sounds the plot but also rings as terse spoken poesy, as a matter of life and breath: “I do this to avoid doing that”; “Never asked, don’t care”; “Come find me when you wake up”; “The Omega has the ability to control time”; “This is a perfectly formed world-conquering organism!” and “I watched him die three-hundred times.” Plus, the verity of “I haven’t lived this day. I don’t know what’s going to happen.” Bill Paxton plays a glib, gleeful Master Sergeant, with an ostensibly Kentucky accent that doesn’t approach R. Lee Ermey’s in “Full Metal Jacket.” Yet he trills about “a swell of pride” and has a key exchange about why he hates gambling, as games of chance, saying several times, “There is no chance, there is only choice, and choice is character and character is fate.”

By chance, within his reborn identity, Cage meets a Special Forces poster figure named Rita (Emily Blunt), and the fate of “Edge of Tomorrow” rests on how the audience respond to Cruise’s Wile E. Coyote and Blunt’s sinewy seraph. Liman makes Cage’s first glimpse of Rita iconic in repetition, seen from across a warehouse space, holding herself in place one-handed, then rising from an iso-pushup, sweaty, prepared, ever in charge. Blunt manages to combine control and yearning in her performance, stoic yet unfinished. “We are not equipped for what’s out there,” Cage says at one point and that may be Liman’s thesis through-and-through. His movie-movie is less about the late Harold Ramis’ Buddhism than about Malcolm Gladwell’s 10,000-hour rule. Practice behind it, “Edge of Tomorrow” comes well equipped. 113m. Widescreen. Reviewed in 3D. (Ray Pride)

“Edge of Tomorrow” opens Friday, June 6 in 3D and other formats.