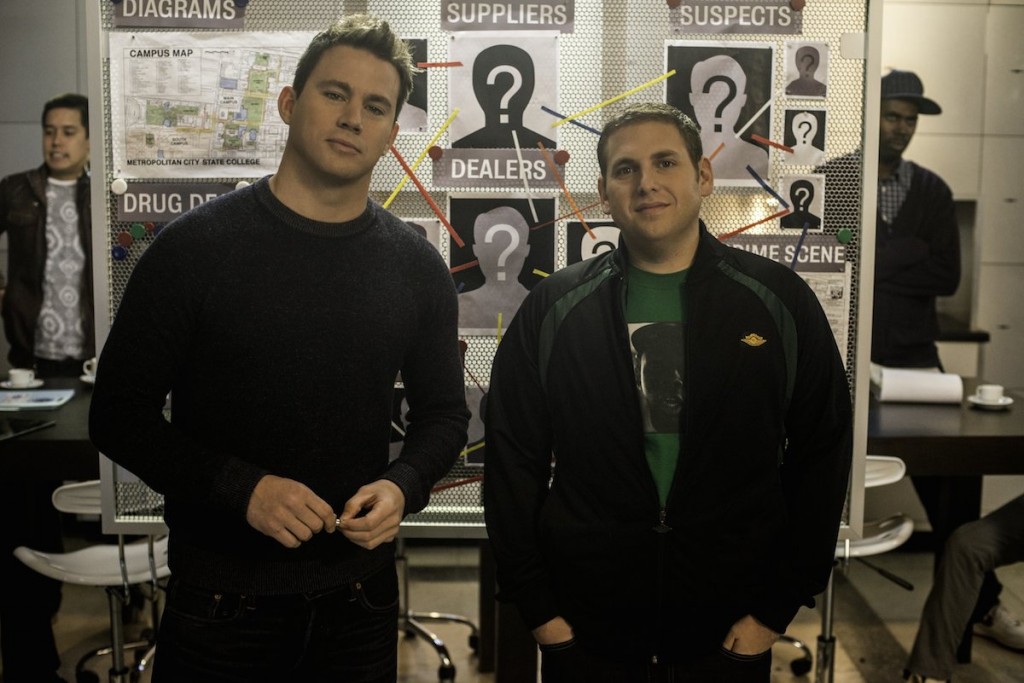 It must have been a good week to start sniffing glue again. Jesus, I wept. I made no friends with my laughter at a packed preview of “22 Jump Street.” That 112 minutes honestly comprised the most sustained amount of laughing I’ve done in years without being held down against my will and tickled. I’m not sure what hit me so hard—it could be the day of the week or the time of the day—but I became the incarnation of the legendary Inappropriate Laugher. (I was surprised no one near me moved to a different seat.) Directors Phil Lord and Christopher Miller found funny bones I didn’t know I had. In box-office success, the team’s roster of the past half-decade is stellar: “Cloudy With A Chance of Meatballs” (2009), “21 Jump Street” (2012), “The Lego Movie” and now this rambunctiously generous, relentlessly goofball mass of laughter. The visual style is loose and reaction-shot-friendly; a quick measure of how adroit the directorial team is with comedy timing at knowing when to hold and when to cut is how they weight reaction shots by Nick Offerman and Ice Cube. It’s a bit of bliss to realize that they’re simply after the funny in live-action, as well as in  “The Lego Movie,” where animation requires more strategic planning. To do both all-family and hard-R scatology, and to do both well? That’s a rare protean gift among studio filmmakers today. In the case of the “Jump”s, there’s a profusion of profanity and filthy jokes that gratify with absurdity and enthusiastically wild complication. “22” has a distinct lack of hostile undercurrent, partially because of the meta-meta material, playing off the idea with continual deadpan that we’re watching a sequel to a sequel to a remake of a TV show and there’s no way it could ever be funny, while… being very funny. With a little more practice, these two might even be able to combine fleet-footed comic wagers with the punishingly severe comic precision of the best of Zucker-Abrahams-Zucker in their hey!day. (And Michael Bay will likely even like the movie’s jabs at cinema-de-blowshitup.) Most of the rolling waves of jokes demonstrate that the two fish-into-water cops (Channing Tatum, Jonah Hill) are usually as dim as shitty 3D projection. Still, there are conflicts between characters where we laugh at situation, but also the character’s rage. (See: Ice Cube. See Ice Cube react. Oh-oh-oh.) As for the dialogue, lines like “I’m the first person in my family to pretend to go to college” are pretty special. Even floating free of context, a line like “You racist, sacrilegious motherfucker, Vietnamese Jesus is just dripping swagger,” or “It’s like the elevator door opening in ‘The Shining,'” make for buzzy nonsense. (Still funny, despite the reference being to the trailer and not the movie.) And what better name is there for a bar in Mexico for spring breakers than “Gringo Pendejo”? Plus, “22” contains both sight gags miming extreme sexual behavior and genially elevating gags about guys-just-being-guys that are not about tolerance, but gay affirmation.  (The script is credited to Michael Bacall and Oren Uziel and Rodney Rothman; story by Michael Bacall & Jonah Hill.) With Patton Oswalt as a tenured truth-speaker; Peter Stormare, Amber Stevens and Jillian Bell as the roommate from hell, who turns out also to be a denizen of other parts of that place. Okay, I’m wrong: her character is nothing but hostility, nothing but hilarious. Everything is awesome. 112m. Widescreen. (Ray Pride)