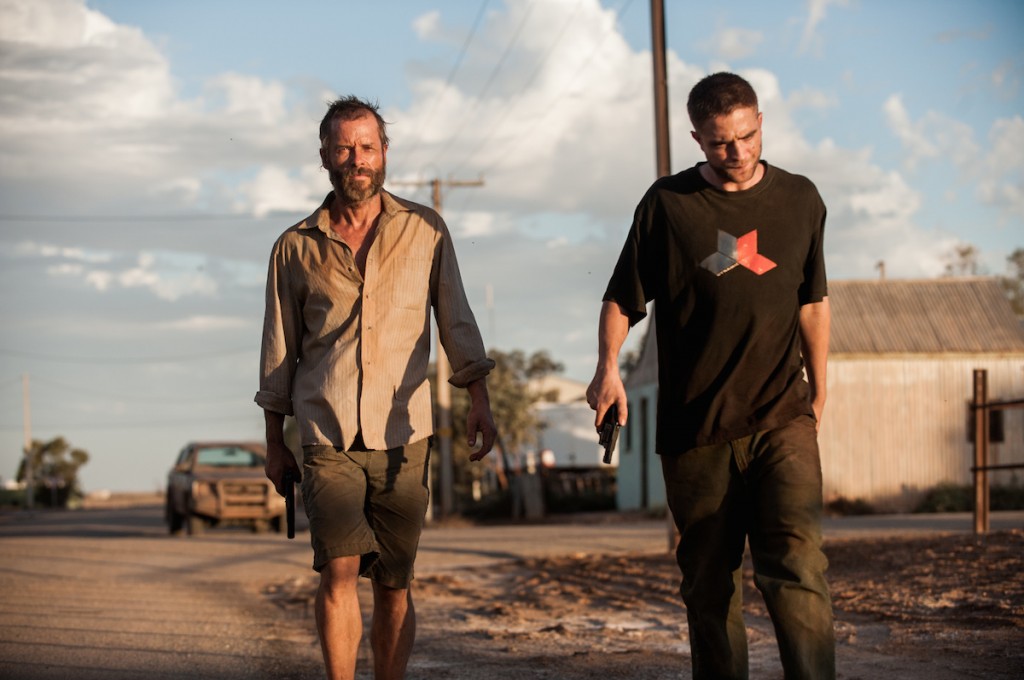 Mosul fell the morning I saw “The Rover,” another domino past Fallujah and Baiji and Tikrit. The rule of law is gone after a decade of the latest war in Iraq, in Afghanistan, Syria, the outer reaches of the post-Soviet Russia. Australian writer-director David Michôd’s second feature, “The Rover” fits right in. It’s bleak and sleek and the illustration of chaos capitalism in the hot, dry, remote outback of Flinders Ranges, South Australia seems less “ten years after the collapse” than what will be ten minutes away for too much of the present-day world. In the Cannes press kit, Michôd was direct about what is oblique in his assured, flinty storytelling: “’The Rover’ is set in an unspecified near-future, but is, in essence, a film about today. It’s about the rapacious capacity for under-regulated Western economies to destroy themselves and it’s about the inevitable shifting balance of global power. It’s about the seemingly intractable problems of human greed and environmental destruction and the despair these forces might elicit in struggling people. More than anything, it’s about the ways these factors affect the emotional lives of individuals.” But the story of “The Rover” is simple: it’s no tract. “History” is happening elsewhere. Eric (Guy Pearce), a man who alternates between a thousand-yard stare and fire in his eyes, sunburnt and grizzled, is gripped by unexplained pain. Three men steal his car. He wants his car back. That’s what drives him, that’s what he tells everyone he meets. He wants his car back. He’s like Lee Marvin’s “Point Blank” character, Walker, a man who only wants what he’s earned. “I want my money” was his refrain; Pearce’s “I want my car.” (His monocular quest also evokes Monte Hellman’s “Cockfighter,” in which Warren Oates’ character refuses to speak until the next time his chicken wins.) The three car thieves were on the run from a botched robbery, where one man’s younger brother, Rey (Robert Pattinson), was left for dead. As in the many Westerns “The Rover” resembles, new bonds form. Families are shaken, then shaped by tragedy. The robustly twitchy Pattinson and Pearce make combustible alliance in search of Rey’s brother. At moments, under burnished yet offhanded light, “The Rover” is literary machismo of a high order. And at others? We’re watching Michelangelo Antonioni’s “Mad Max.” (This is not a bad thing.) Michôd and cinematographer Natasha Braier (“Chinese Puzzle,” “The Milk of Sorrow”) emphasize masculine determination and ineffectuality by fixing repeatedly on the roll of men’s shoulders, face turned to the horizon, spiritual burden expressed in a hitch of step and pitch of the male frame. As with Michôd’s debut feature, “Animal Kingdom,” sound design and music are elemental to the harsh mood of his filmmaking. The jagged, wildly disparate soundtrack includes music by Bon Iver’s Colin Stetson, William Basinski, Giacinto Scelsi and two pieces by Tortoise, “Djed” and “Four Day Interval.” Along with the score by Antony Partos, the music jangles, bursts, soars, crashes, lovingly alienating. “What a thing to get worked up about in this day and age,” a prim, motherly brothel keeper observes to Pearce’s figure. “You must really love that car, darling,” he’s told. “What is it about that car that you love it so much?” The answer may be the only thing that has kept him alive; solving it may be the last thing he ever does. With Scoot McNairy, David Field, Tawanda Manyimo, Gillian Jones. 102m. Widescreen. Shot on 35mm. (Ray Pride)

“The Rover” opens Friday, June 20. A thirty-second teaser is below.