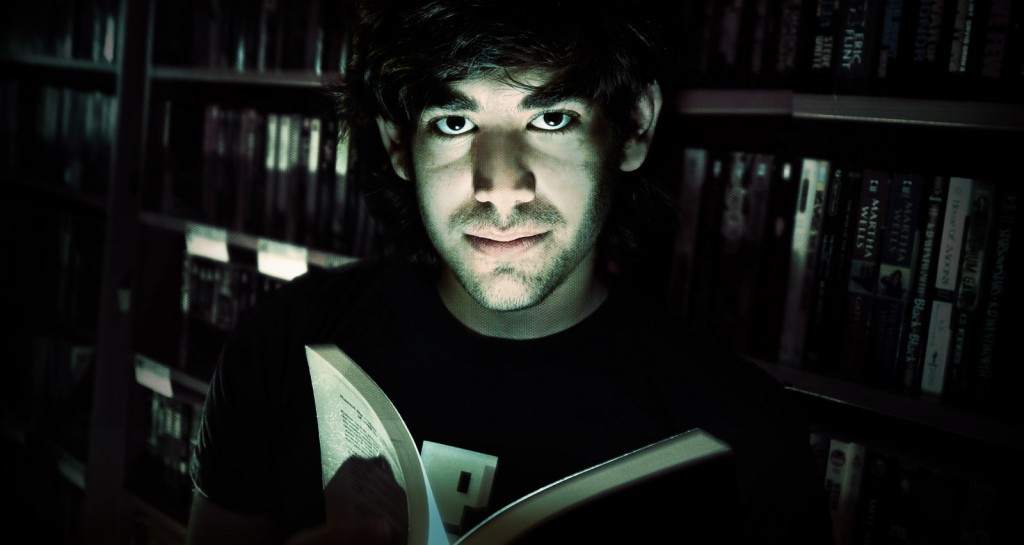 At the time of the untimely suicide of twenty-six-year-old internet savant Aaron Swartz, I was blindsided by the loss, and on that day I compiled everything I could find in a blog entry here. Among others, Rick Perlstein wrote: “He was also the first person I knew who wrote five-word emails, no more information, and no less, than what he needed to convey, Twitter avant la lettre—like all of us now; we are all Aaron Swartz… I remember a creature who seemed at first almost to be made up of pure data, disembodied…  Only slowly, it seems, did he come to learn that he possessed a body… I remember the time, at the height of our friendship, when he announced he was taking a month off from connecting to any computer. I remember him telling me afterward about what it felt like: glorious, radiant, strange, alive, true (he mostly read history books). Dude got to see what it was like outside Plato’s Cave two separate times in his life. How many of us can say that?” … I like what the blogger Lambert Strether wrote on my Facebook page,” Perlstein wrote. “Our society should be selecting for the Aaron Swartzes of this world. Instead, generous and ethical behavior, especially when combined with technical brilliance, turns out to be maladaptive, indeed lethal. If Swartz had been Wall Street’s youngest investment banker, he would be alive today.” In Brian Knappenberger’s superb if less-than-adventurous documentary, “The Internet’s Own Boy: The Story of Aaron Swartz,” we see those attributes and much more. It’s essential viewing, vital, madly tragic, infuriating and heartbreaking: the story of an incendiary genius who was punished by bureaucrats and prosecutors as an example to any who might disagree with the evolution of digital media and rights. There’s so much out there about the particular case that led to his fearful self-extinction that I don’t want to rehearse it here, but just to recommend with highest regard this moving, marvelous tribute to the kind of prodigal intelligence that ought to save our world, or at least transform it before our very eyes. While rife with talking heads, “The Internet’s Own Boy: The Story of Aaron Swartz” remains a splendid testament. Interviewees include Tim Berners-Lee, Cory Doctorow, Peter Eckersley, Lawrence Lessig and David Segal. Lest the film seem hagiographic at times, many who thought Swartz a despicable criminal declined to be interviewed. 105m. (Ray Pride)

“The Internet’s Own Boy: The Story of Aaron Swartz” opens Friday, June 27 for a week at Siskel.