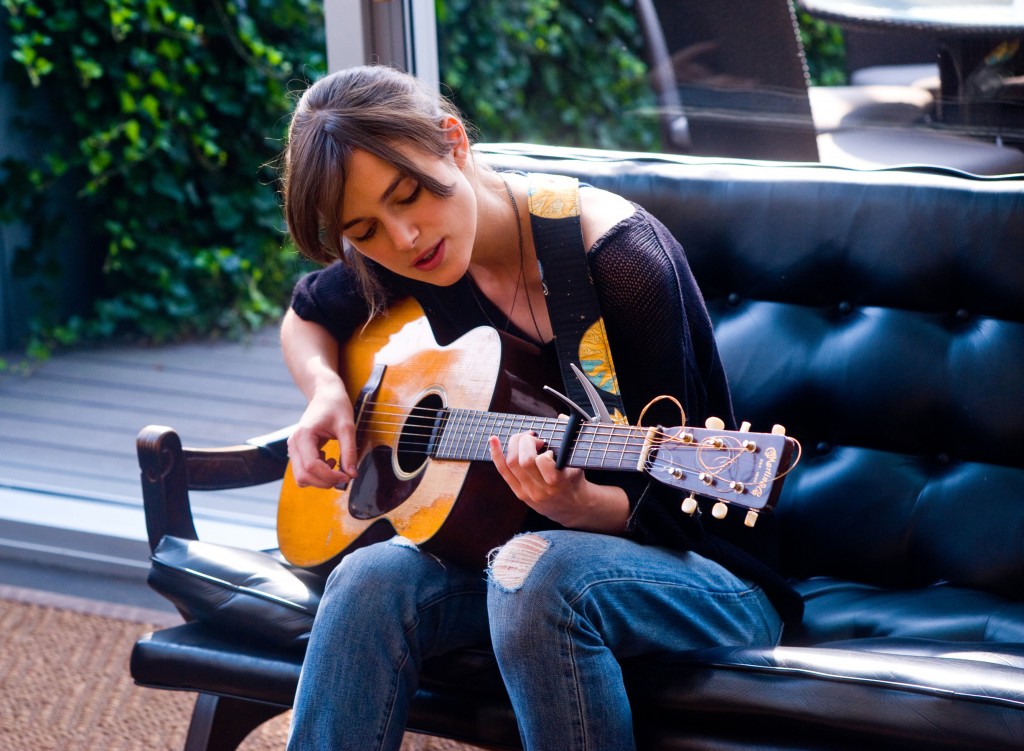 Boy already met girl, girl already left boy, that was “Once.” What can a filmmaker do after a success like that? Writer-director John Carney doesn’t fully succeed Twice, but there are sweet and knowing moments throughout “Begin Again,” his latest romance about songwriting and a city, in this case, New York City in autumn. His script’s conceit is that Gretta, a young English songwriter (Keira Knightley) abandoned in New York by her rising-pop-star boyfriend (Adam Levine) would be discovered in an Arlene’s Grocery-like East Village music showcase by a just-fired, hard-drinking, burned-out music label co-owner named Dan (Mark Ruffalo), and record an entire album live on locations in Manhattan. (Accept the premise, you’ll like the smaller bits.) Until we get a city symphony like Ang Lee’s never-made sung-through version of Stephin Merritt’s “69 Love Songs,” “Begin Again” will have to do. Ruffalo has called Carney “the John Cassavetes of cinematic musicals,” which is a reach, but his little fillips and niceties speak to his years as an observant touring musician. “Once,” probably the shittiest-looking great movie I know, demolishes me. Its elemental swooniness, its shameless earnestness, are the confectionary movie romances ought to be shaped from. Even thinking of putting the DVD in makes me stop: I don’t want it not to do what it did to me the four-five times I saw it when it came out. “Begin Again”? Very entertaining. Sometimes silly. Laced with bouquets of fine fuckin’ swearing. And a dramatic-romantic resolution for all concerned that puts its world right, rather than rise to empty wish fulfillment. The early fall setting exploits the warm candied glow of New York City streets, and Gretta warms them further in a range of effortless, perfectly summery sundresses and sandals and half-cocked ponytails. When they meet, Gretta insists she’s not “Judy Garland just off a bus looking for stardom,” she’s insistent on authenticity. Who has that authenticity, Dan asks? Takes her a second, she says, “Randy Newman.” And what else could he say in turn? “I. Fucking. Love. Randy Newman.” There are a lot of nuggets like that, and there’s a shot of the Manhattan skyline, widescreen, bright digital colors, a fantasy of a city still all promises and dreams and no voices of recrimination. As Dan’s estranged wife, Catherine Keener does her usual finery with small moments, and Hailee Steinfeld (“True Grit”) hits high notes as his teenage daughter. With James Corden as a friend of Gretta’s and fellow musician who has a busking scene in a square echoing “Once,” CeeLo Green, Yasiin Bey. 104m. (Ray Pride)