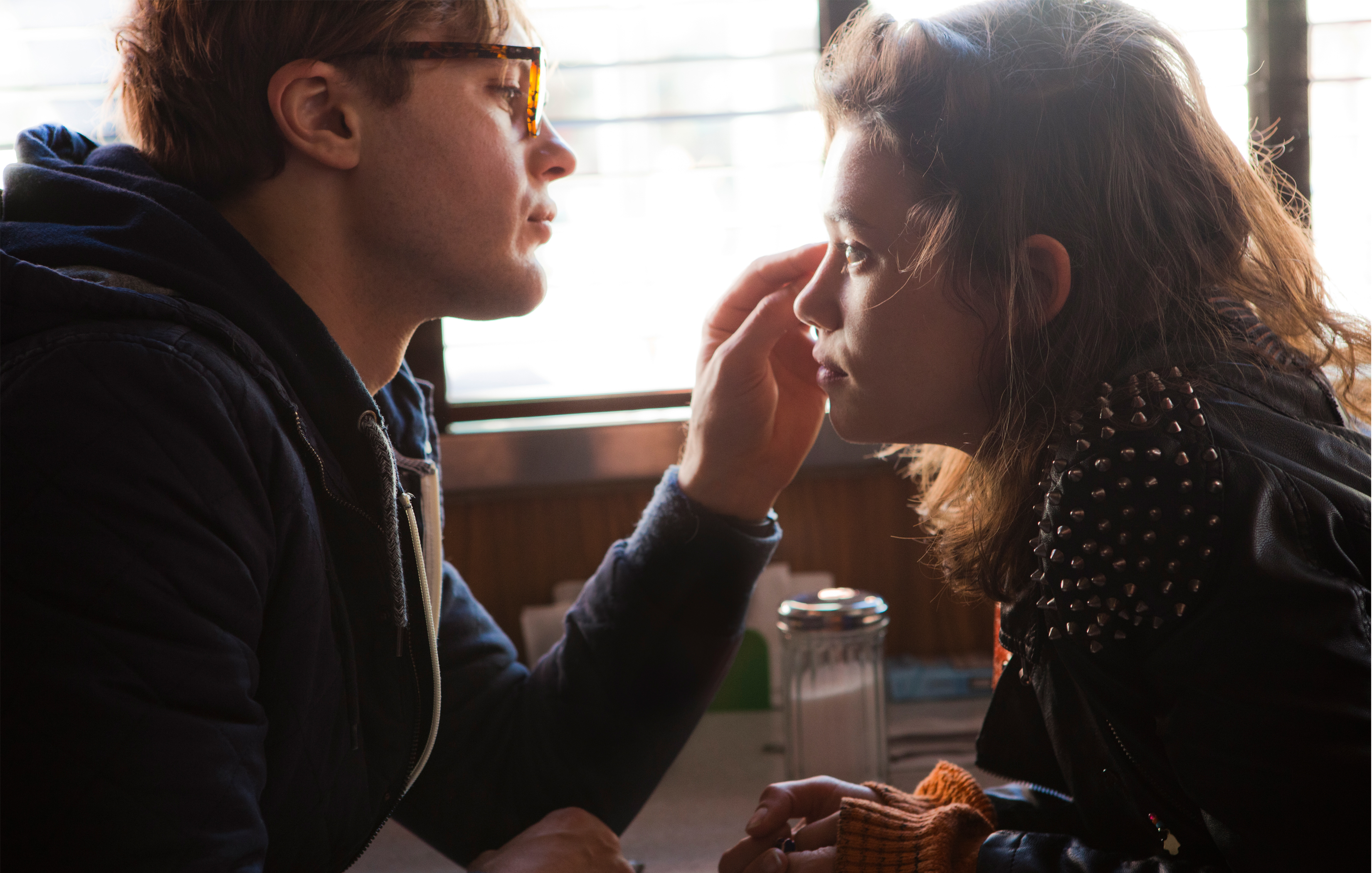 “I Origins” blushes with swirls of sensory extravagance, of emotional extremes, of drenching passions and bathetic loss.

It’s the sophomore feature of writer-editor-director Mike Cahill, who made his debut in 2011 with “Another Earth” (co-written with actor-writer Brit Marling), and I could reprise my enthusiastic description of that film upon its release for his marvelously ambitious new movie: “serious, somber, bruised, hopeful, thrilling, shocking, emotions-over-the-line speculative science-fiction romance-tragedy with one scene in it that I cannot tell you how hard it hits and I hope no one else does either.” (For “I Origins,” I’ll add “exhilarating.”)

Michael Pitt gives one of his most concentrated performances as Dr. Ian Gray, a molecular biologist obsessed with defining the evolution of the eye. He also has a fetish of asking people he encounters if he can take a picture of their eye. He’s obsessed with coincidences and numbers, too: among other patterns that materialize in his moment-to-moment life, the pattern “11 11” becomes very important. (And the title itself plays with those figures.) A fervent romance erupts with Sofi (Astrid Berges-Frisbey), a European woman he meets at a party, flirts with on a rooftop, then fucks in a bathroom. Things quickly grow strained, she flees;  he pursues. Epic romantic gestures proliferate. His obsessions grow, including with the dazzling character of her eyes. Even as Sofi eludes his grasp, Ian continues research with his lab partner, Karen (Brit Marling, also fine), and after they’ve become a couple, make a scientific discovery they find staggering, even spiritual. The talk of the characters isn’t mumbo-jumbo, or earnest, or your usual staccato pulse of movie-movie dialogue. Reviews from Sundance proved that “I Origins” won’t be to everyone’s liking, but so many things in the moment-to-moment flow of this achingly beautiful film astonished me.  Both of Cahill’s features have smart central characters who also do or say sometimes unspeakable, even amoral things, smart characters, who also say mean things to each other, they say dumb things. A lot of the dialogue, like Ian telling Karen, “You’re so fucking stubborn,” as a complaint, in fact identifies her strongest characteristic or best trait.

“That was totally improvised!” Cahill says, breaking out laughing when I mention that line in an interview. It’s a consistent device, including a line Ian bursts out in the thrall of adoration and infatuation, “You’re amazing, I hate you!”

“You’re amazing. I hate you,” Cahill deadpans back. “It’s all him. All Michael. You are really honing in on the really specific ones [where he was in the moment].”

The design and lighting of the film aggressively uses bright light, darkness, reflections, refractions and very tactile behaviors. For instance, Karen fills a window that overlooks the city with word after word. “Right. All those different species of sightless organisms.

“I wanted you to be thinking about senses,” Cahill says, “because sort of the key to the movie is the limit of our senses. Tactility in film is something I’ve learned, something I’ve experimented with, it’s a very simple thing. I’m not sure what films I’ve seen it in, but if you see a film with a character engaged in the tactile? Somehow that opens that part of your brain as a viewer, and then somehow you feel closer to the character. In many ways, you’re trying to get people to feel closer and closer to this character, always, in any film. In ‘Another Earth,’ there’s a very tactile moment [at the end] when she’s walking back to the house and she touches the shingles before [the very last shot of the film]. And I follow her hand, because you can feel that, even though you’re just watching it, you can feel it.

“The tactile is important,” he continues, “and in this film, we talk about worms having two senses and being modified to have three senses. So, logically, it follows that we have five senses; of course there must be more dimensions, that’s not the limit. “

“I Origins” feels like its own organism, but it also has affinities to filmmakers, including Nic Roeg (“Bad Timing,” “Don’t Look Now”) and Krzysztof Kieslowski. I expect Cahill to resist talking about influence, but that isn’t the case. “When I was a sophomore in college, in one week, I watched three movies. They were Steven Soderbergh’s ‘sex, lies and videotape,’ Julian Schnabel’s ‘Basquiat’ and Kieslowski’s ‘Red.’ And I realized I had never watched a movie before, I had never watched, like, a film. I didn’t know—didn’t grow up with film education, anything like that. I remember that week switched everything in my brain. I realized that this is what I wanted to do. I worked at a pizza place at the time, and I didn’t make that much money, but I had a hundred bucks and I went to a pawnshop and I bought a Super-8 camera. That week. I taught myself how to edit on Premiere and I think it was that realization that something about the human experience can be really, really captured and conveyed through this very particular art form. It’s like narrative-making, visuals, the performance—that fucking thing in a brilliant performance, which you see in Michael. That thing that is alive. That can give, that can give us hope, not hope, just something that’s really difficult to articulate, to blah-blah. Blah-blah doesn’t do it. Pictures and sound over the course of time, over the course of an hour-and-a-half or two hours, utilizing POV, you can fucking sum up the universe.”

Sounds like Kieslowski to me. Cahill leans forward and speaks quickly.“You get the sense that we’re in this physical world, with actual, practical things, but there are echoes of something else. That’s what coincidences seem to suggest, or miracles, or intuition. I think all those things, they have some umbilical cord to another realm that we can’t necessarily perceive and that’s why they all… Sometimes I feel telepathic with people. Minds in sync, same thought occurs simultaneously? And I want tests! All right, think of a number! And it’ll never work. I tried to process this through the rational—I take something that is totally working on the umbilical cord to another realm and process it through the scientific method. It doesn’t work.”

So you make a movie, then? He nods, smiles.

“I Origins” opens Friday, July 25 at River East, Landmark Century and Century Evanston. The trailer is below.