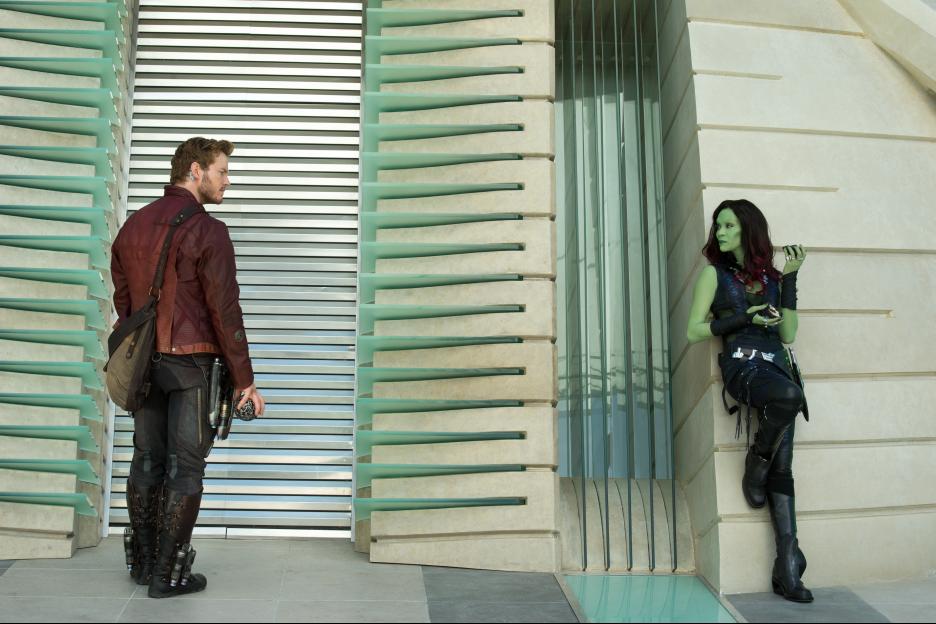 Another Marvel left-field choice of a seemingly unlikely director pays off, in slightly different fashion than “Captain America: The Winter Soldier,” directed by the Russo brothers as a politically charged gloss on 1970s paranoia thrillers. Co-writer-director James Gunn’s 2010 no-budget “Super” had its share of appalling violence, but he still manages to thread abrupt violence and casual malice into the huge expanses of the outright comedy and fine sarcasm of “Guardians.” And most of the meanness is funny, after a cartoonish fashion. Any moment that could be drenched in earnestness is either beautiful—a bereft child’s ascension in a beam of light to a spaceship that will wrench him from Earth—or mocked from the get-go. Chris Pratt plays the grown boy, Peter Quill, as a would-be cock-of-the-galaxy who describes himself at one point, hopefully, as “an a-hole, but not one-hundred-percent a dick.” The other “Guardians” thrown together by a madman’s quest for something called “an infinity stone” include Zoe Saldana, bathed in green, one fashion step sideways from the blue of “Avatar,” who states “I am a warrior and an assassin, I don’t dance,” but maybe, possibly could be persuaded. Former wrestler David Bautista plays a muscleman called “Drax The Destroyer,” but it’s the delicacy of his reactions and line readings that make him as engaging as the leading man. Plus there’s a sentient tree, voiced by Vin Diesel, and a wisecracking raccoon mutation voiced by Bradley Cooper. Insistently goofy and genially self-conscious, the material mostly soars. Other, smaller roles include Benicio Del Toro as a cross between Jim Jarmusch and Eddie Izzard with just a powdering of Karl Lagerfeld. (He is having fun.) Still, Gunn’s verbal humor is the biggest star of them all, with so many solidly directed line deliveries and intonations. Shorn of context, here’s a few: Drax’s grave intonation as he’s illuminated by a single word: “Metaphor.” “We’re just like Kevin Bacon.” “You’re making me beat up grass.” “I wasn’t listening, I was thinking of something else.” “There’s a little pee coming out of me right now.” “I’m going to die surrounded by some of the biggest idiots in the galaxy.” “Guardians” makes a reach toward something about the power of cheap music, I was thinking, and here comes “Fooled Around And Fell in Love” only minutes after “Escape (The Pina Colada Song).” The other song choices are giddy-goofy fun as well, including an epic scene in space scored to The Runaways’ “Cherry Bomb” and another to David Bowie’s “Moonage Daydream.” The production design is engagingly different from other entries in the Marvel enterprise, including a city that looks like a bristling but glossy futuristic London. With Glenn Close, Michael Rooker, Lee Pace, Djimon Hounsou, John C. Reilly, Sean Gunn, Stan Lee as “Xandarian Ladies’ Man,” and a blink-and-you’ll-miss-it cameo by Tromafilm’s Lloyd Kaufman. (Kaufman mentored Gunn well.) 122m. Widescreen. (Ray Pride)