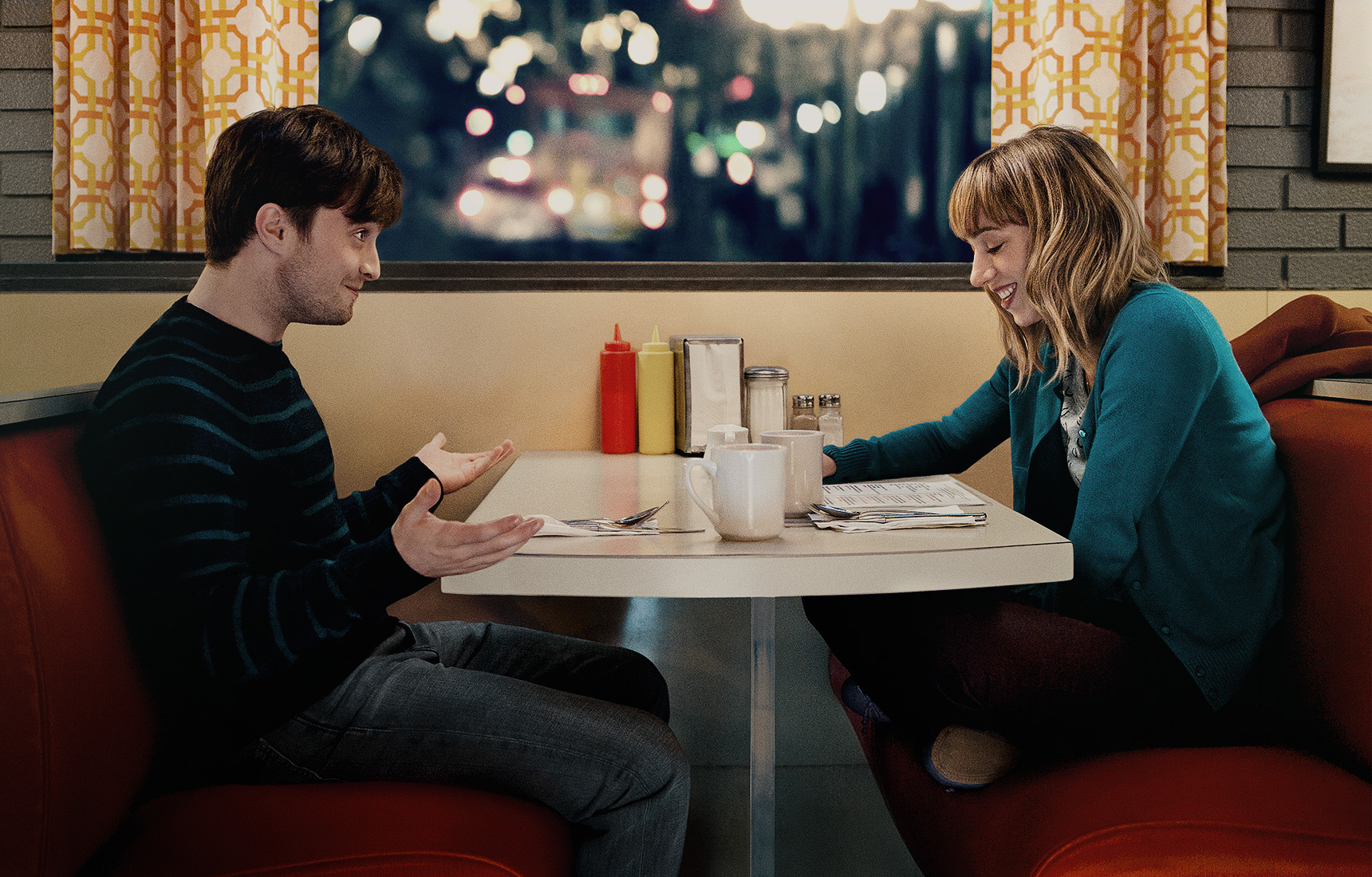 In one of the first scenes in Michael Dowse’s uncompromisingly adorable modern-day romantic comedy, “What If,” Wallace (Daniel Radcliffe) is at a party, a year after the breakup of a relationship, transfixed by word combinations of magnetic poetry on a refrigerator: “Love is stupid monkeys dancing in a slapstick hurricane.” Within seconds, he meets Chantry (Zoe Kazan), a woman in a relationship of five years, and charming is as charming does. They push the word choices around with their fingertips and wide-eye each other. They’re razor-sharp in the flirtation neither expected, and the toe-to-toe exchanges are exhilarating. Immediately, you can see why these two would be attracted to each other. But there have to be pesky obstacles for star-crossed love to overcome, including the tragedy that is the platonic friendship.

(“What If” debuted at the 2013 Toronto International Film Festival as “The F Word,” as in “friends.”)  Screenplays requiring romantic obstacles in the modern world are usually drawn from a worn deck of contrivances, but Chantry and Wallace speak and jape and joke as if there simultaneously are no stakes but also are stakes in each and every syllable. Although the tenor of the humor is as Canuck as fuck as Canuck fucking gets, “What If” still plays as universal, smart and most importantly, very, very funny. (I detected only a single “aboot” from a side character.) Both Radcliffe and Kazan, but especially Kazan, have laser instincts for the smallest, most telling details. Their reaction shots are delicious, rich with effortless charm, and often graced with small, attentive bits of body language. In one scene, the pair hug and Chantry quickly, silently whiffs his neck, the back of Wallace’s head. (It’s one of many minor frissons in the physicality of their attraction/flirtation; it’s a word and a feeling you should know.) The project with Dowse and screenwriter Elan Mastai (adapting the play “Toothpaste and Cigars” by T.J. Dawe and Michael Rinaldi) seems to have been not to subvert the well-worn clichés of  1990s-2000s romcom humbug but to embrace the good and trash the bad. Love is not the only thing the characters tumble into: the bursts of roughhouse slapstick seem appropriate coming from the director of the winning hockey comedy, “Goon,” as well as “FUBAR” and “It’s All Gone Pete Tong.” 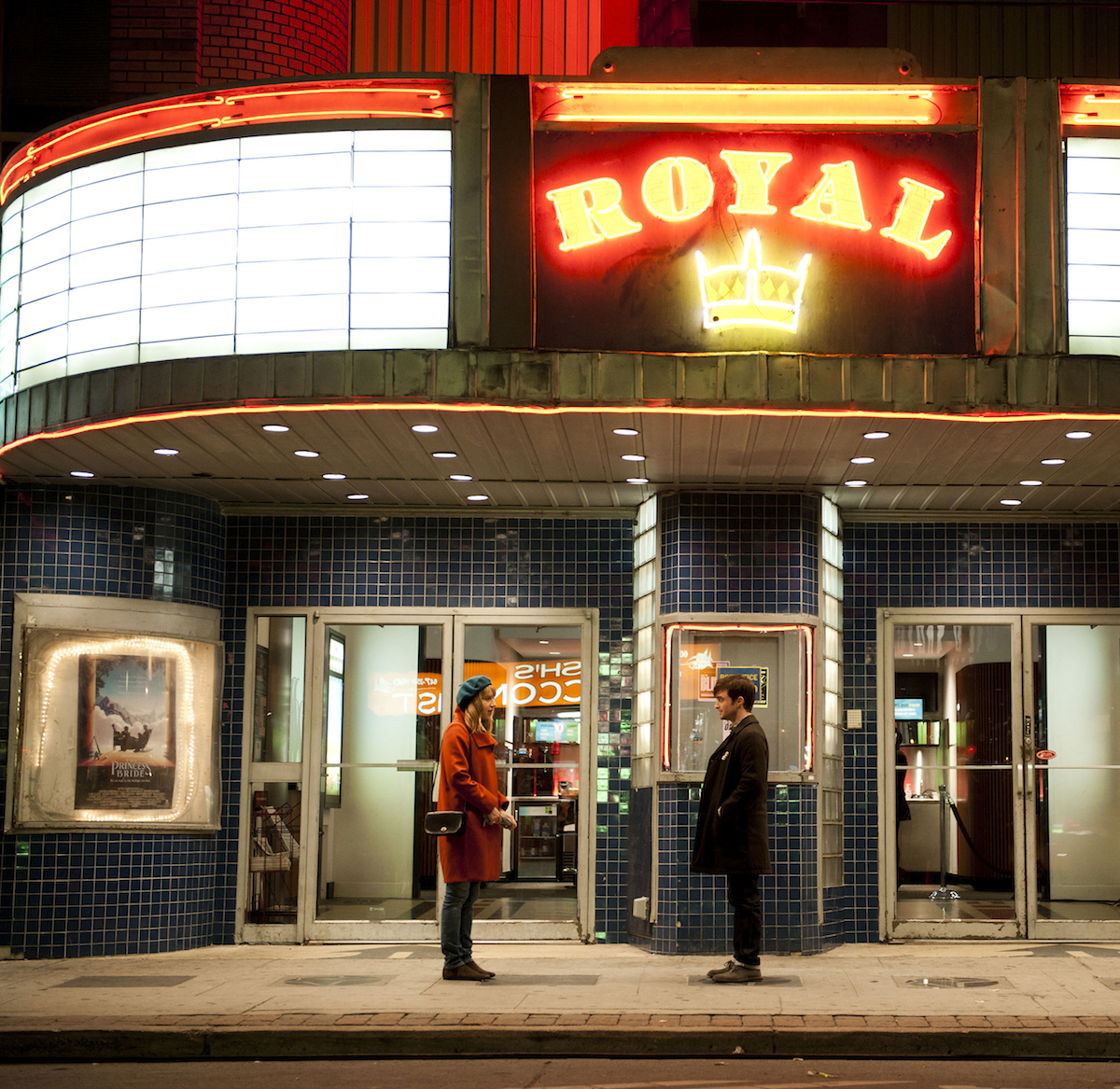 Another winning attribute is Toronto being shot for T.O. itself, not being another city, defining that metropolis’ substantial charm much the way Sarah Polley did with her dreamily summery “Take This Waltz” and its lived-in production design. Chantry lives in an apartment across from a Beer Store, repertory house Royal Cinema is on display, the CN Tower is stolid in background skyline shots, and skinny-dipping along Lake Ontario, at Scarborough Bluffs, a million-and-three stars bloom in the sky.

A professional animator, Chantry imagines her characters gliding through the sky, light-mapped silkily against passing buildings in the night. Her agreeably winsome, mostly melancholic-faced flying projections of a woman with wings, in flight, doodles from her sketchbook grown world-sized, become one with the architecture of Toronto and the province of the firmament. Even in pretty bursts like that, Dowse doesn’t resort to cutesy montages to show the course of their near-thirtysomething romance, but keeps the banter in play, the elemental dance, boy-girl-boy-girl, between Wallace and Chantry.

Kazan works wonders with her every line, even the very plain “I’m not sure about anything,” which she renders in a series of small, quizzical lilts that approach the unpunctuated gift of Christopher Walken’s delivery. And I’m partial to any movie that finally gets a co-protagonist to cleanly put his world to rights, and tell the girl,  “Whatever it is between us, It’s the best thing that ever happened to me and I don’t want it to be over.” Wallace and Chantry startle each other. “What If” startled me with elemental generosity, keenly earnest but willing to embrace shameless vulgarity. “Love is dirty, but sometimes it’s downright filthy,” even if it’s only PG-13. The lightly likable score is by A. C. Newman, from The New Pornographers. With Rafe Spall, Megan Park, Adam Driver, Mackenzie Davis, Rebecca Northan, Jemima Rooper. 97m. (Ray Pride)

“What If” opens Friday, August 8 at River East, Landmark Century and Evanston Cine-Arts.