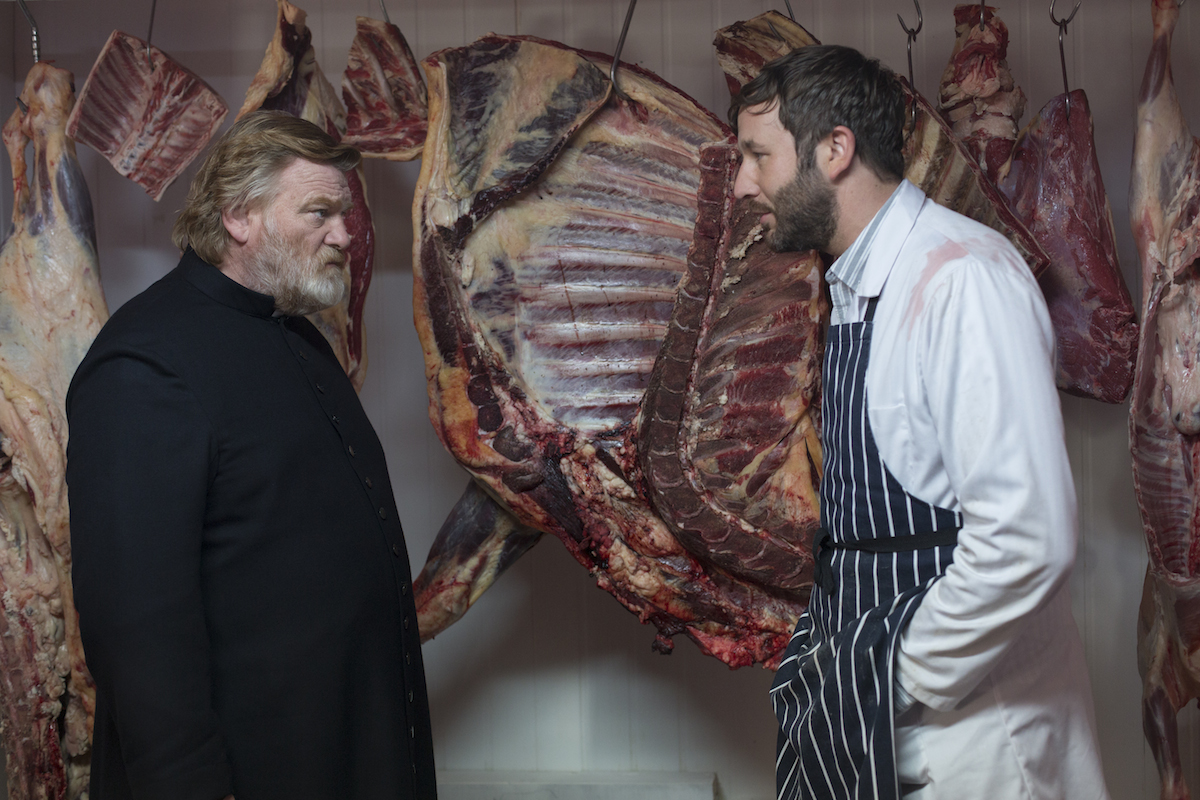 Ireland, day: Man walks into a confession booth and tells a priest of terrible things that had been done to him by a priest when he was small. Tells the priest: I’ll get back at the church by killing an innocent priest in one week, and that’s you, get your life in order.

Now there’s a set-up. “Calvary,” the second feature by writer-director John Michael McDonagh, fills that week full-to-bursting with a raft of idiosyncratic characters and philosophical conflicts and the current crisis in the Church and idiomatic comic dialogue strung along by the script’s thriller-like ticking clock. Brendan Gleeson’s Father James could very well be his best performance in a great career. (He told me it’s his favorite role.) Graham Greene divided his books into two classes: the novels, which took on spiritual matters, and the lighter ones, which he called “entertainments.” McDonagh’s knack is to combine both the novelistic, spiritual elements of Greene and lighter notes to achieve a high level of gratifying entertainment. (It’s also beautifully shot: I could write a few thousand words about the cinematography and artful visual style.)

“Calvary,” is, in a very specific way, a “B” movie, by which I mean, “Bergman, Buñuel and Bresson,” I tell McDonagh. He laughs. “Oh dear! Those were the governing influences. When I was going through preproduction, I went through the entire back catalog again. Largely because, it’s sort of based on ‘Diary of a Country Priest,’ but I find that one of the less compelling works, to be honest. To me, it’s more like Brendan’s character is the donkey in ‘Au hasard, Balthazar.’ Obviously, I did steal the ending from ‘Pickpocket,’ that’s a quite obvious reference. It’s funny, ‘Diary of a Country Priest,’ when I eventually got around to watching it, which was during preproduction, I just realized how close it was to our film, the episodic nature of the priest going round talking to the village inhabitants. The main thing was the priest in that movie is pretty naive and a little bit prissy. And kind of annoying! When I sent it to Brendan, he had the same response.”

And Buñuel? “Buñuel, obviously, it’s ‘Viridiana,’ ‘Tristana,’ those kinds of movies, anarchic black humor that was an overriding influence. Bergman, yeah, I plowed through a lot of Bergman. I think the main one was ‘Winter Light,’ that made a very big impression on me when we were preparing to make the movie. There are only four or five characters in that and not many locations, very simply shot, but dealing with very emotional and philosophical themes. That was a big fillip for me, going in to making our movie, that someone could make a movie like that.”

There are at least a dozen characters in the Irish village that test Father James. “I don’t know how many are actually there, someone mentioned that there were twelve, and that they represent the Stations of the Cross, or something. Well, that wasn’t my intention. The structure of the film is the five stages of grief. I originally intended to possibly structure it around the Twelve Stations of the Cross, but I thought, twelve stations? We’re gonna wind up with a three-and-a-half-hour movie. I thought I’d stick to five! Denial, anger, bargaining, depression, then acceptance.”

The vitality of even the smallest character reminds me of Preston Sturges, in “Sullivan’s Travels,” referring to life as a “cockeyed caravan.”  “In a way, I had in the back of my mind that this was a screwball comedy,” McDonagh says. “That was the intention in creating those kinds of idiosyncratic, eccentric people. I went through a box set of Sturges when it came out a couple of years ago, I went through that again. I also rewatched a lot of Tarkovsky but I wouldn’t be as big a fan. The main one was ‘The Sacrifice,’ and I remember when I first saw that, when I was about sixteen, I was at the National Film Theatre and I was right in the middle of a row and I wanted to get out and leave because I was so bored! I thought I’d annoy too many people, so I sat there and it was the longest two-and-a-half hours of my life. But then I watched it again recently, preparing for the movie, it was probably one of the Tarkovskys I liked the most. In fact, it shows how film can change, the more mature you get.”

You can’t step in the same river twice? “Yeah, exactly. And of course, that film has the great burning-of-the-house sequence. I probably watched it because of the burning of the church sequence. But I don’t think I approached Tarkovsky’s cinematic level!”

Why the combination of thriller stakes and a nearly theatrical serial two-hander?  “The thriller aspect, I mean, I guess, that’s a reference to Hitchcock’s ‘I Confess,’ which was a movie I always loved. I always thought the thriller aspect would be more palatable to get an audience in, and then I could deal with all these kinds of spiritual-philosophical issues while the ticking of the clock was going on in the background. I just think the nature of what a priest does in a small town, ministering to the sick, performing last rites, or trying to help people whose marriages are in trouble, there’s an episodic nature to that. I would say it’s more novelistic than theatrical. I’m still very much influenced by novels, I’m more interested in a new novel that’s coming out than a new film. I’ve always been like that. I started off as a novelist and I failed miserably so I still think of myself as a failed novelist.”

But you’re repurposing those instincts. “Yes,” he says, pausing. “Those impulses.”