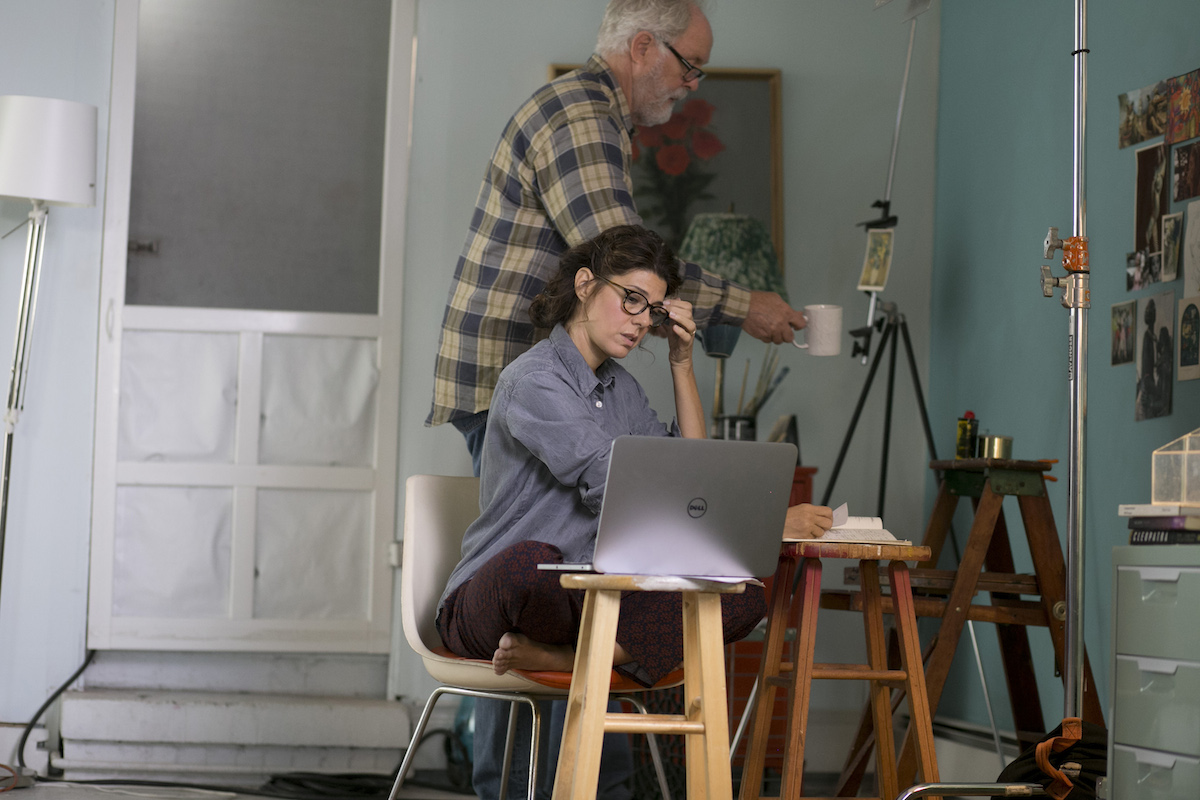 Ira Sachs’ quiet, measured “Love is Strange” captures a forced separation of a couple who’ve been together for thirty-nine years, a painter and a music instructor, played by John Lithgow and Alfred Molina. After their marriage, Molina’s character loses his job as a music teacher at a Catholic school, and they’re separated after having to sell their apartment, settling, for at least a brief time, into the lives of their extended families.

Drama seeps in, sensation is suggested. The film’s quietly detailed, lived-in, loved-in feel is both emotionally specific and painterly in its suggestive formal sensations. (Sachs cites American painter Fairfield Porter as a key visual touchstone.) Among his cast, which extends two generations, each figure walks in geometry. Each character has a specific fashion of holding space. “Love is Strange” is about love and about family and about the necessity of generations sharing knowledge and secrets, yet there’s not a line of dialogue that announces this. “Love is Strange” also bears the acuteness, the precision of the era the characters would have lived through. Buried deep beneath the surfaces, surely there are submerged fragments of Frank O’Hara and his fragrant, antic verse as well as the lore of the painters who frequented and illuminated the interior life of lairs like the Cedar Tavern. The succession of setting and framings are beautiful for their precision and coolness, from strong design rather than a prurient glow.  (Cinematographer Christos Voudouris’ credits include “Alps” and “Before Midnight”; production designer Amy Williams repeats from Sachs’ “Keep The Lights On.”)

And the film’s bravura final fifteen minutes: dear God in Manhattan! There’s one lyrical, cinematic wallop after another, beginning with a scene where the rejoined couple is finally at ease over drinks in New York’s oldest gay bar, Greenwich Village’s Julius’ Bar. What was very, very good, with modest leaps beyond plausibility, reaches for authentic greatness.

When we met up in Chicago recently, after speaking at Sundance in January, I mention that I’d talked to the late producer-director Sydney Pollack in that same room. “You know he was the man who gave me permission not to rehearse my actors,” Sachs says. “He was the executive producer on ‘Forty Shades Of Blue’ (2005) and I was someone who had come out of the theater and had a certain way of doing things that had a lot to do with rehearsal. And from talking to Sydney, who didn’t often rehearse his actors, I realized that you had to create new strategies for how to work in film. I now don’t rehearse. That’s become key to how I get a certain kind of performance that I’m looking for.”

Watching “Love is Strange,” my mind was extrapolating how the characters’ lives would have coincided with the artistic scene of Greenwich Village from the 1950s forward, as well as Sachs’ articulated admiration of European filmmakers like Frenchman Maurice Pialat, whose “We Won’t Grow Old Together” recently floored me. “Oh yeah,” Sachs agrees. “That film was the film for us before ‘Keep The Lights On’ (2012).  The title that I feel every film could be called is ‘The Heart is a Lonely Hunter.’ What can not be called that!  Even ‘X-Men’! But in ‘Love is Strange,’ they do grow old together! [John Lithgow’s character is] seventy-five. They’re together thirty-nine years, and actually, as my mother says, when her friends get sick now, when they die, it is not a tragedy. It is a sadness and it is loss, but it is part of life.”

I also thought about Frank O’Hara’s writing and the title of one of his poetry collections, “Meditations in an Emergency.” “Mmmm,” Sachs murmurs. “That’s a great title for this film. And, not incidentally, Frank O’Hara has been a very significant figure in my life over the last ten years. I’ve had many a Frank O’Hara party in the last few years. I love everything about him. I love that he’s the centrifugal force in a community of people, that he creates life in kind of humble ways. And all the ways that he organized people and brought them together. That he was clearly a very generous person. He has this quality that I think [Lithgow’s character] has, particularly, in that the characters have inspired me, which is a combination of humility and confidence. Frank O’Hara was also a wonderful New York City poet, so his attentiveness to the daily life. I think of this film as a multigenerational family epic told in a cramped New York apartment. You could say that Frank O’Hara is a neorealist, right? On some levels? I think that kind of ordinary turned into the extraordinary is something that I hope for.” 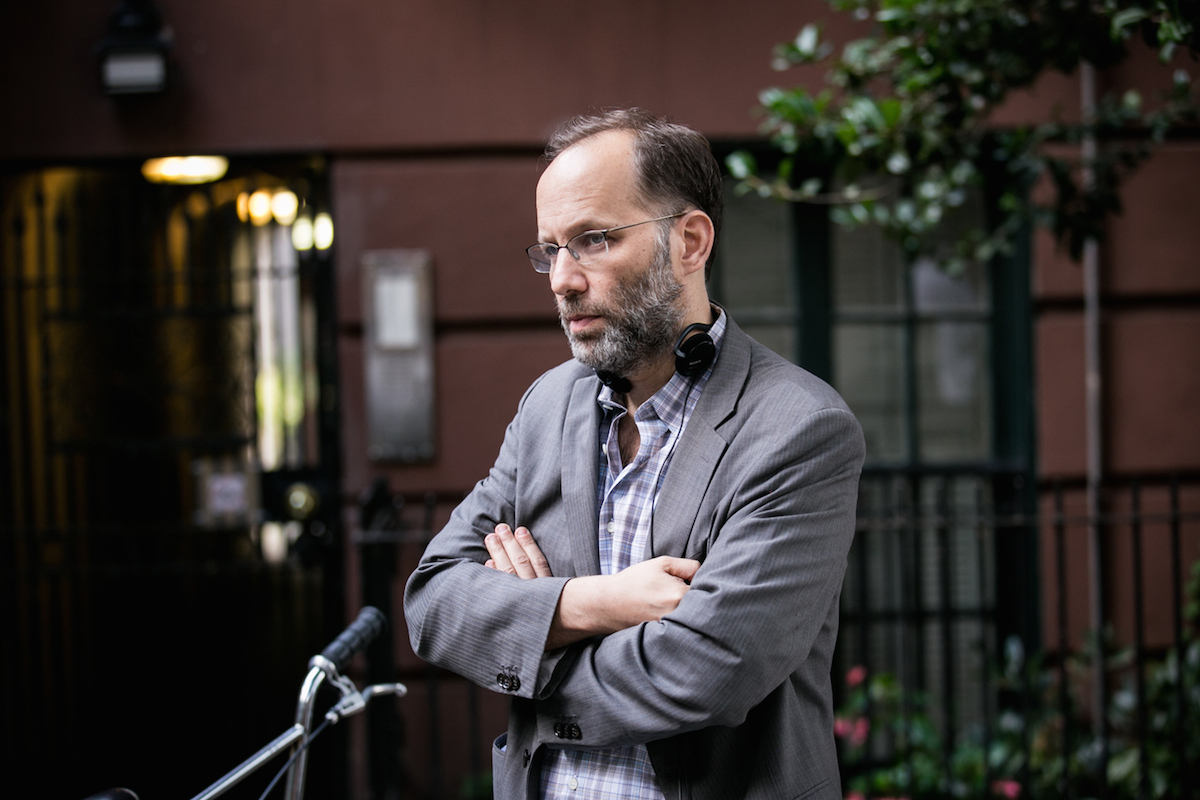 Some of the verse has a cocky rhythm to it, but it’s a New York cheekiness rather than arrogant. “Right. Right. Someone said to me that they were really happy that toward the end of the film you see that these characters have history, and that the history is not sentimentalized in the film. At the same time, their language… This woman was telling me she was really happy that [a character says] ‘motherfucker,’ because they’re just like a sweet old couple in some ways. Interestingly enough, ‘motherfucker’ alone gets you an ‘R’ rating. You say it once. Which is kind of amazing.”

You could show them, just change the title to “Love Is A Motherfucker.” “Yeah, exactly,” Sachs says, smiling.

“Love is Strange” opens Friday, August 29. A clip from the Julius’ Bar scene is below.