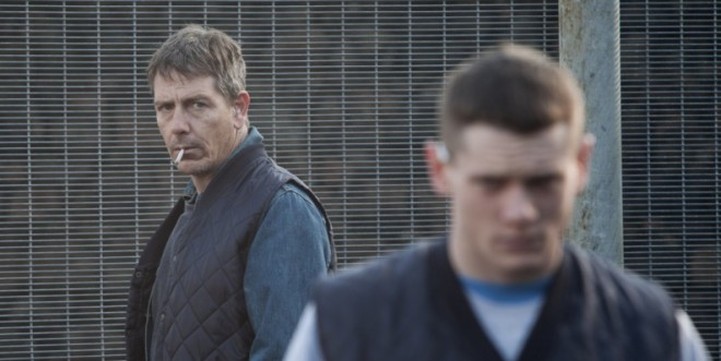 “Starred Up” is ominous from its first instants, the sounds beginning with the very first frame under presentation credits, somewhere from inner space, like the confines of a skull pressured by the slightest sounds of a low febrile hum in a constrained space that echoes from other, nearby constrained spaces.

In a word: prison. In a world: a prisoner.

A Greek tragedy is in the offing. Violent nineteen-year-old convict Eric (Jack O’Connell, “Eden Lake,” Angelina Jolie’s upcoming “Unbroken”) has been “starred up”: slang for being transferred from a juvenile jail to an adult facility, which happens to be the prison where his estranged father Nev (Ben Mendelsohn) has long been incarcerated.

The first seven minutes follow the succession of double-checks and humiliations involved in his induction, or even ingestion into the system, seven long minutes to get him into his cell, where Eric immediately snaps a disposable razor and blazes a toothbrush to create a provisional shank for what turns out to be imminent usage. The gentle float and sway of the Steadicam also suggests instability and the potential for sudden deadly motions, contrasting the naturalism of the setting of the cell block with a tensile, cumulatively dreamy-cum-nightmarish use of framing and cutting. “Starred Up” confines itself to an actual prison facility, and was shot in sequence with two editors cutting the film together daily to insure a rare immediacy in an all-too-familiar genre. The conflicts you expect from angry men under pressure come quickly, but within an unforeseen atmosphere.

David Mackenzie’s eighth feature demonstrates the vivid, idiosyncratic storytelling fluency that’s been present in all of his most recent movies, including 2009’s “Spread,” a canny yet sensual satire of sexuality in Los Angeles and 2011’s “Perfect Sense,” an acute apocalyptic fable in which all of mankind loses a single sense at a time, until near the end, the soundtrack goes mute and shortly afterward, there is only blackness while mankind mills, doomed, outside the frame.

The genre scaffolding of the prison drama allows first-time screenwriter Jonathan Asser, who worked in the British prison system as therapist, to quickly establish a father-son conflict worthy of Greek drama.

Australian actor Ben Mendelsohn, both in lousy movies and superb ones, is a quietly infernal force. He plays a hard man with soft edges, with dangerous powers of attention. (His best performances include as a simmering, sensationally deranged sociopath in David Michôd’s “Animal Kingdom,” a bundle of hurt in “The Place Beyond The Pines,” and trouble itself in “Killing Them Softly,” Andrew Dominik’s underrated critique of male self-pity in the capacious container of a gangster saga.

Mendelsohn brings purring wonder to Nev’s bruising first words to his son in the prison yard, after a slow saunter over to the fence where Eric loiters. As Nev arrives at medium height in the wide frame, he pauses to make eye contact, and we hear the sound of a jet ripping distantly on high in the sky. Riiiip.

“Stupid fuckin junkie slut she was,” Nev begins. “You stepped up, done right by her, third playoff in that geezer,” which seems to mean he made it through three stints in juvenile detention. Nev leans closer. “Still, don’t make you nuffin in ‘ere. You conduct yourself usual, like an ordinary cunt. No more performing, no dramas. Right. Get on the yard wif the rest of em.” And then, rolling the second word so slightly, “The yaaard.”

The entire film is heavy with local inflections and slang-laced dialogue but the movie moves in its own post-musical fashion. It’s stuff we recognize as a real setting, but stylized in an onrushing way, not partaking of the vivid but lurid baroque of prison films like Nicolas Winding Refn’s “Bronson” or Andrew Dominik’s “Chopper.” The crew includes director of photography Michael McDonough (“Winter’s Bone,” “13”) and production designer Tom McCullagh (Steven McQueen’s prison picture “Hunger”). But each element, each moment is just one terse component of a breathtakingly accomplished canvas. Cruelty is unceasing, and Mackenzie refuses to blink.

Brightly and often boldly lit, filmed in an actual prison and shot in sequence, the setting heightens the continual and inventive violence, including a handcuffed Eric bobbing his head downward toward a guard’s lap, where through the cloth of “Officer Johnson”’s trousers, clamps the man’s cock between his teeth. The climactic violent acts of “Starred Up,” as well as its last, felt words both wound and soothe: it’s the dramatic dialectic of one of the most accomplished of world filmmakers yet to be widely recognized.

“Starred Up” opens Friday, September 5 at Facets. A trailer is below.