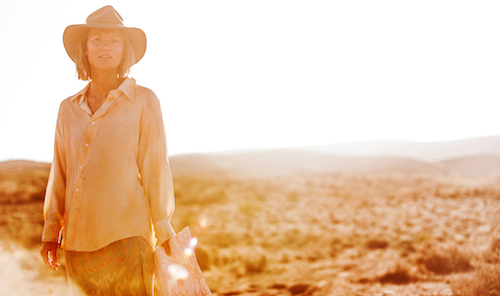 Mia Wasikowska radiates elemental strength in John Curran’s adaptation of “Tracks,” Robyn Davidson’s 1980 chronicle of her 1975 solo pilgrimage from Alice Springs, Australia across nearly 2,000 miles of desert in the company of a dog and four volatile, once-feral camels. The unlikely trip is financed by National Geographic, who sends photographer Rick Smolan (Adam Driver) at signposts along the way to mythologize her youthful determination (and beauty, which Smolan is smitten by). Curran’s earlier movies, including “We Don’t Live Here Anymore” (2004) and “Stone” (2010), demonstrated a similar willingness to keep the drama on simmer, to slowly accrue sensation rather than goosing the narrative. Robyn doesn’t offer much by the way of explanation to those curious about her expedition, pretty much limiting it to “My father crossed the Kalahari in 1935.” It’s one sandal in front of the other, and sometimes barefoot, as she pushes toward the ocean with sun-kissed alacrity. “You don’t have to be unlucky to die out there,” she’s warned. “There’s not too many camel ladies in this town,” she’s told. “It’s preposterous to think I will make it unscathed 2,000 miles to the ocean,” she muses in voiceover. Robyn tans and freckles and goes a little madder as she moves forward, and the marvelous Wasikowska captures both her steadfastness and her increasing disorientation in simple, direct gestures. It’s a lovely walkabout. Bonus: Wasikowska gets to employ her own native Australian accent. With Rainer Bock, Rolley Mintuma, Robert Coleby, Emma Booth. 110m. (Ray Pride)