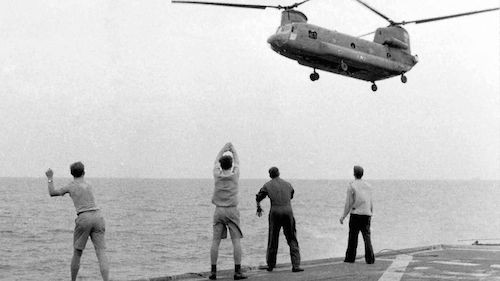 Rory Kennedy’s essential film is history as it ought to be revisited, reinvestigated, renewed as documentary. There’s so much no one bothered to know in the past forty years since the fall of Saigon. The stark, powerful “Last Days In Vietnam,” about the months and days preceding the evacuation of Americans as well South Vietnamese allies and their families in 1975, is superb filmmaking. Archival footage that’s astonishing for its immediacy is neatly woven with accounts of the disaster waiting to happen. It all moves with the emphatic leisure of a rolling nightmare. The testimony is grave, emotional and sometimes even tender. Pretty much everyone agrees with these words from one witness: “It was a terrible, terrible, terrible moral dilemma for everybody.” Even the elderly Henry Kissinger, croaking out his testimony, seems at least ruffled about the debacle, even after the passage of so much time. 98m. (Ray Pride)

“Last Days In Vietnam” opens Friday, October 3 at the Music Box. The trailer is below.