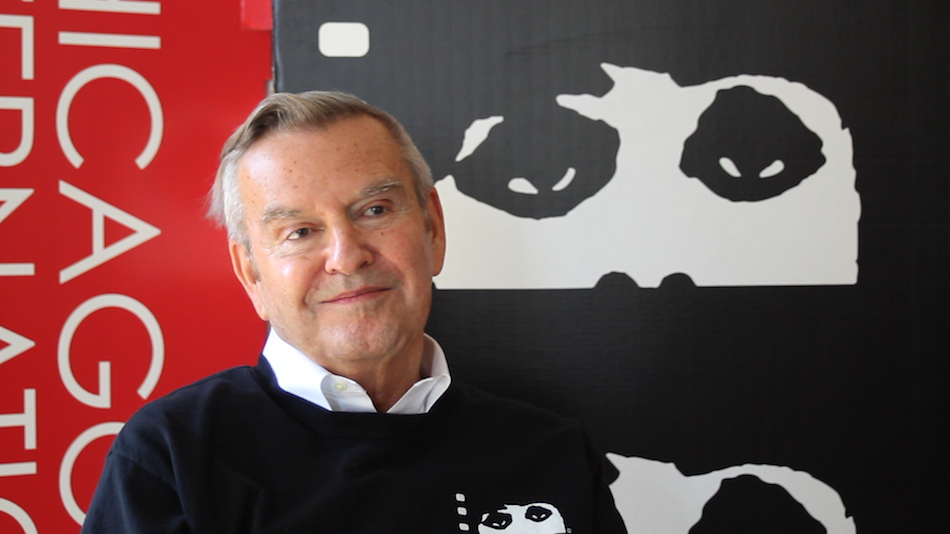 Michael Kutza could be the longest-serving head of a film festival—anywhere on earth?—but it isn’t a topic he’d ever dwell on.

One warm September afternoon in an empty boardroom in the festival’s Loop offices, the Wabash Avenue El rackets directly below and street music rises up the eight floors like the soundtrack of the opening scene of “The Conversation.” Kutza says offhandedly, “He knows five songs,” including the Flintstones theme song. “Then someone gives him a couple of bucks and he starts the cycle again. He has one seasonal one for Christmas.” He pauses meaningfully. “At three o’clock, the saxophone player arrives.”

The founder and artistic director of the Chicago International Film Festival knows a thing or two about arrivals and departures. For forty-five minutes, we dished about personalities, considered whether film festivals have changed across the decades, and what fifty years in the biz means to him.

You were doing brand identity long before that bit of jargon, right now you’re sitting right in front of your own design of a silent-era-like pair of eyes. Were you sitting at the kitchen table, saying, I’m going to have a film festival, I’m going to need a logo?
I had another logo before this one. This came in 1967. But I always designed things. I’m a designer. Growing up to be a doctor, the one thing my folks never wanted me to do was anything arts, anything, film. You had to become a doctor. It was only later when I found out that… They met in medical school and mother was a piano teacher. Dad never told me he was a graphic designer. Surgeons always were. Surgeons study every inch of what they do that morning. All the books at home he studied before the operations, I never put two and two together that he was a designer. He never [told me]. I had to become a doctor. We never talked. But you don’t need to know all this stuff. Let’s talk about the film festival!

But how did this one come about?
It’s not a piece of film. It only has sprockets on one side. It’s symbolically film. And she is symbolic of all those kinds of people I was raised [watching]. Colleen Moore on, all those silent-film-star ladies. Like Clara Bow, Theda Bara… And when we had Liza Minnelli here the first time round, she said, ‘Well, that’s me.’ No. It’s not. Charlie Chaplin saw it and he knew it was him. No, it’s not you. We were in Venice together, I was working for Venice then. Nope. Could be me! On a sad day.

How have film festivals changed through the years in terms of personal appearances by directors and stars?
It comes down to such basics. I’ve always found these people are so easy and so much fun, the difficulty with any of these personalities—it’s not that person, it’s the agent. The handler. The one who is paid to say ‘no.’ They make life totally impossible. But once you get your hands on the talent, they’re fine. It’s so annoying!

And your philosophy in programming?
I think it’s exactly the same. My role is to find the new directors. We still want to discover new talent, first and second-time films. To award filmmakers at that important part of their career.

How does Chicago differ from other festivals?
We all share the same films when you get right down to it. All of us are showing winners of Cannes, Berlin, Venice, blah-blah-blah. We want Chicago to see them, we want you to see what’s going on in the world. That’s how all that began, we’ve got to keep that going. You’re not going to see them on Netflix, you’re not going to see them anywhere [else]. Maybe later some of them will come over to the Film Center, or Facets, I don’t even know anymore. Maybe some will play at the Music Box or Landmark, but I think we still have a niche. We always were a niche market.

So in looking for these first and second films, you still have a capacity for surprise?
Absolutely. That’s the only reason I think I’m enjoying this, these fifty years. People say, ‘Oh it’s fifty years.’ It doesn’t faze me. I don’t understand that… thing. That it’s fifty years. It doesn’t mean anything to me. I mean, look at this team I’ve got. You’ve met all the people, they’re great, they love what they’re doing and if I wasn’t here? They could do it in a second. I’ve taught them to be exactly me! To be as foolish… and love movies. I think they do. If they don’t, they’ll go!

There’s a philosophy, right there.
I never thought I’d say such a thing, but I did, didn’t I?

[…] An Entertaining Drink With Chicago Int’l Film Festival Founder-Artistic Director Michael Kutza And – A Touch of Dish About The 50-Year-Old Festival, Now In Progress […]