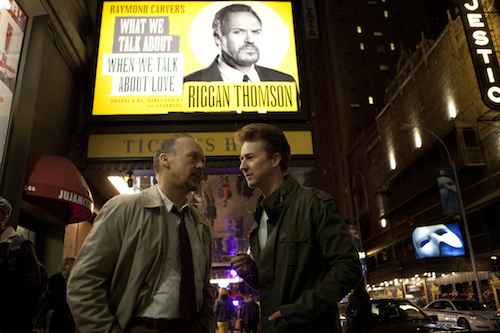 “Birdman (The Unexpected Virtue of Ignorance)”

Along with a hundred-plus features and shorts from around the world, the fiftieth edition of the Chicago International Film Festival includes notable appearances and master classes, including Michael Moore presenting his restored version of “Roger & Me,” a film that was nearly lost; producer-turned-online distributor Ted Hope talking about his memoir-manifesto, “Hope For Film,” and Oliver Stone, with a director’s cut of “Natural Born Killers” and “Alexander: Ultimate Edition,” a fourth version of his 2004 epic, reportedly with a warm handful of homoerotic content restored to its 207-minute duration. An Isabelle Huppert tribute will trail four features, including Michael Haneke’s “The Piano Teacher” and Claire Denis’ “White Material,” both shown in 35mm. Kathleen Turner will tell her truth, and eighty-one-year-old Hollywood Renaissance bright light Bob Rafelson will show his 1990 exploration epic “Mountains of the Moon” before presenting a master class to Columbia students, a rapscallion of a raconteur when I heard him speak a few years ago.

There’s a range of highlights of world cinema on offer from festivals earlier in 2014, many to be released in the coming months, and often in search of awards-season love. From Australia comes Jennifer Kent’s “The Babadook,” a pleasingly creepy Sundance standout about what happens when a picture book comes to life and changes the life of a young mother and her young son. Quebec’s darkly lyrical Denis Côté continues to explore nonfiction with “Joy of Man’s Desiring,” a poetic documentary abstracting human interaction with manufacturing machinery. Brazil’s foreign-language Oscar entry, “The Way He Looks,” about a gay teen discovering his sexuality offers the twist that he’s blind.

Some big guns: Alejandro González Iñárritu brings Michael Keaton back to a role he can manhandle in “Birdman (The Unexpected Virtue of Ignorance),” a metafictional black comedy about an actor who once starred as a movie superhero and now plans a comeback in a Broadway adaptation of Raymond Carver short stories. Along with a powerhouse cast that includes Emma Stone, Edward Norton, Naomi Watts, Zach Galifianakis and Andrea Riseborough, cinematographer Emmanuel Lubezki (“Gravity”) shot the film as a simulated single take. Cannes reviews suggest that “Clouds of Sils Maria” Olivier Assayas’ variation on “All About Eve,” with Kristin Stewart and Juliette Binoche and Chloe Grace Moretz is more quietly bravura, but just as intent about the wants and needs of the poor, aging actor. Belgian masters, the Dardenne brothers, provide a low-key showcase for the great but still-blooming Marion Cotillard, “Two Days, One Night,” playing a depressed young mother who has to convince her coworkers not to eliminate her job.

The festival’s World Cinema Spotlight is on Scandinavian films, including opening night’s “Miss Julie,” Liv Ullmann’s first feature as director in fourteen years, with Jessica Chastain and Colin Farrell in the Strindberg adaptation. Ullmann’s closest collaborator, Ingmar Bergman, is represented by a reprise of his intimate family epic “Fanny & Alexander,” and Iceland’s most prolific and eclectic director Baltasar Kormákur gets two slots, with his poppy slacker comedy “101 Reykjavik” and the mythically grim thriller “The Deep.” The oldest title represented is Jan Troell’s 1967 Gold Hugo-winner “Here’s Your Life,” a World War I coming-of-age story.

Coming off the festival circuit, Morten Tyldum’s “The Imitation Game,” about code-cracker Alan Turing (Benedict Cumberbatch) and the crash of his career over then-forbidden homosexuality, has garnered a passel of awards rumoring. Bill Murray plays a Bill Murray-type character in the coming-of-age comedy “St. Vincent,” which could be a good excuse to give Bill Murray awards just for being Bill Murray. But I’m anticipating great things from 2014 Cannes Palme d’Or winner “Winter Sleep,” by Turkish master Nuri Bilge Ceylan, from all three hours and sixteen minutes. (It’s expanded from a short, short story by Chekhov.) A highly regarded premiere from the Toronto International Festival is “The Look of Silence,” Joshua Oppenheimer’s second documentary, a reverse angle to his first, “The Act of Killing,” in which he listens at the victims instead of the killers of the state-sanctioned mass murders in Indonesia in the 1960s.

One truly confounding left-field entry comes from Finnish documentary master Pirjo Honkasalo (“Three Rooms of Melancholia”), a deliriously gorgeous and almost insanely misguided widescreen black-and-white, homoerotic coming-of-age hallucination, “Concrete Night.” If even only a couple films previewed before the festival are as daffy as this lustrous bosh, I’ll be a happy critic. But there are sure to be more goodies as well, and there will be reviews online at newcityfilm.com.

For more details, including ticket availability, the festival’s website is chicagofilmfestival.com.