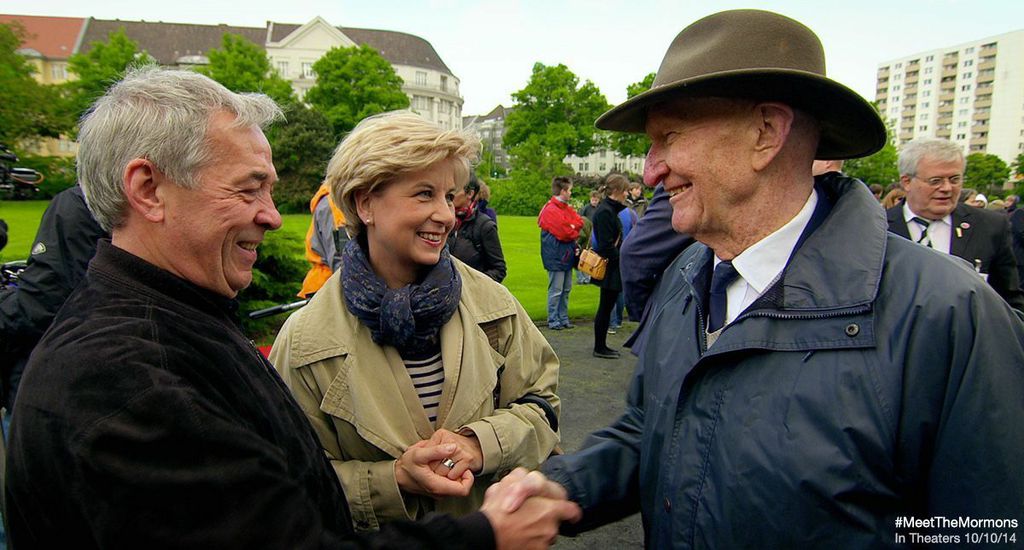 “Meet the Mormons” resembles a standard shot-on-digital documentary, composed as it is of images and sounds, and of talking heads that are also smiling heads. But it’s actually an often-cryptic document about the lives of six members of the Church of Jesus Christ of Latter-day Saints, and even could be taken for a television documentary except at the moments that it resembles a random mass of impulses. Nearly nothing in Blair Treu’s kindly public-relations film illuminates the practices or beliefs of the church, except for a will to goodness and success, and small, seemingly telling details go unremarked: for instance, the “scripture case” carried by several characters, containing the holy books of the faith; or the odd image of a Bishop of the Church at home who consults a near-disposable paperback edition of the Book of Mormon you’d find in the side table of a Marriott motel room rather than a finer copy of great personal worth. The figures include the Naval Academy’s head football coach, who’s Samoan-American, a Costa Rican kickboxer who married into a Mormon family, an engineer in Nepal, and “The Candy Bomber,” an old white guy who threw candy to the children of Berlin, without military approval, from an American plane after the fall of Germany. (He’s a prototypical old white guy, unrelentingly cheery while chewing the same story he’s been chewing for decades.) The few modestly interesting points are odd bits of behavior, including the comments, “That’s what he brought to the table, him being different”; “My dad dances very goofily” and a figure who compares the lack of a leg to being born biracial out of wedlock. There’s no way this upbeat, information-free hodgepodge could function as a sales pitch for the religion. While reportedly produced by the Church as an infomercial to be shown at a Mormon visitors’ center in Salt Lake City, the 200-plus screen nationwide release of “Meet the Mormons” will likely go unremarked, unless by Mormons interested in a multicultural, multiracial portrait of their faith, or if you might bring along a favored ex-Mormon to provide necessary footnotes to what differentiates Mormonism from other beliefs. With Jermaine Sullivan, Ken Niumatalolo, Carolina Munoz Marin, Gail Halvorsen, Bishnu Adhikari. 78m. (Ray Pride)

“Meet the Mormons” opens Friday, October 10 at several outlying locations. The trailer is below.