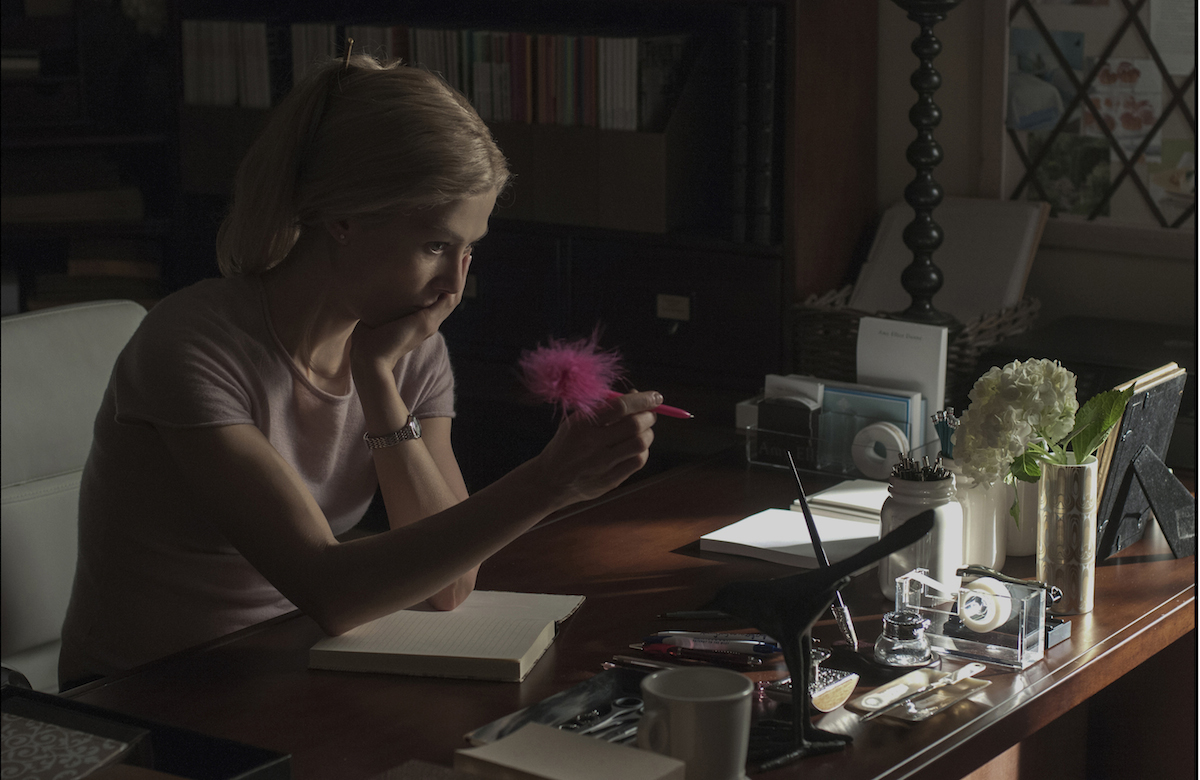 When a boy meta girl… The hyperbolic, galvanic, filthy-black-funny “Gone Girl” is multitudes. And it’s one of the most complexly disturbing movies about grownups fucking up sex in all too long. Sex, no, not sex, really, but power. Who has the fucking upper hand and who has the upper hand fucking? (Oh, the music in Rosamund Pike’s voice when her “Amazing Amy” first beds Nick (Ben Affleck) and says, as he tousles his face upon her lap in an act of assured cunnilingus, “Nick Dunne, I really like you.”) And every bit of it is so readily read into, and not limited to various and sundry accusations of misogyny in the narrative.

I still fear the as-yet-unwatched “King of Comedy” Blu-ray on the shelf in front of me, a troubling movie in the same rarefied vein as David Fincher and Chicago-based novelist-screenwriter Gillian Flynn’s adaptation of her bestseller. “Gone Girl” is a basket of readily spoiled twists and turns. (Which is why I’m just signposting a range of reflections here; there’s a spoiler alert at the end.) “Gone Girl” is a horror film. “Gone Girl” has no heroes. “Gone Girl” is a comedy, or as Fincher put it last week in a Los Angeles public appearance, it’s “a mystery [that] then becomes an absurdist thriller and then a satire.” (There are many antic verbal passages that veer through levels of stylization but succeed whether bluntly hyperbolic or simply sneaky.) “Gone Girl” is unreliable narration atop unreliable narration. A second viewing was nearly as unnerving as the first: there’s three sides to every story, yours mine and the cold, hard truth; Fincher and Flynn have their cake, your cake and eat it too, in meta-meta commentary of the modern moment of media and what none dare call “relationships.” Like Ned Benson’s lovely bruise of a film, “The Disappearance of Eleanor Rigby, Her/Him,” subjectivities shift. Benson seeks lyricism through unmoored characters, drifting through a haze of unnamable grief after loss. Fincher’s bifurcated narrative, on the other hand, offers shifts and shards that can be turned so many ways in the mind, and a character that, like Peter Sellers’ Quilty in Stanley Kubrick’s “Lolita,” that may or may not exist except within a single troubled mind. Cut at a sweetly punishing clip, “Gone Girl” refracts so many attitudes about the cupidity of human desire and the rapidity of the fall when attempts to fuck up another person fuck you up in turn. It may be as dense as Stanley Kubrick’s final poison-pen valentine, “Eyes Wide Shut,” which ends with the line, “You know, there is something very important we need to do as soon as possible… Fuck.” The opening and closing shots of “Gone Girl” rhyme and bookend in a way that is so much more sophisticated than some of the errant critiques I’ve read. What it does is fuck the story up, toss it in the air and let it hold there for a brief second of one human gaze that does not tell you what it is thinking. “Gone Girl”’s sleekly subjective content is darkly cynical about marriage and human relations, period, implying we create ourselves through our actions, we recreate our lovers through memory, we create the idea of our lovers/mates/enemies through selective memory and brute, hopeless desire and will to power. (The dense score by Trent Reznor and Atticus Ross is integral to the seething moods.) There’s a passage near the end of Flynn’s novel [spoiler] that roils in the mind in much the way Fincher confidently juggles the cool-hot ice-melty pretty pulp button-pusher that is “Gone Girl,” the movie: “We pretend to be in love, and we do the things we like to do when we’re in love, and it feels almost like love sometimes, because we are so perfectly putting ourselves through the paces. Reviving the muscle memory of early romance. When I forget—I can sometimes briefly forget who my wife is—I actually like hanging out with her. Or the her she is pretending to be. The fact is, my wife is a murderess who is sometimes really fun.” Oh yeah: I am so pleased I saw “Gone Girl” alone. Among the immaculate secondary cast are a happily wack-a-doodle Neil Patrick Harris, a salt-of-the-earth Carrie Coon, a most amusing Tyler Perry, a laser-like Kim Dickens, David Clennon, Patrick Fugit and Emily Ratajkowski. FindAmazingAmy.com, a website mentioned in the film, is a small delight of multimedia doodling. 149m. Widescreen. (Ray Pride)