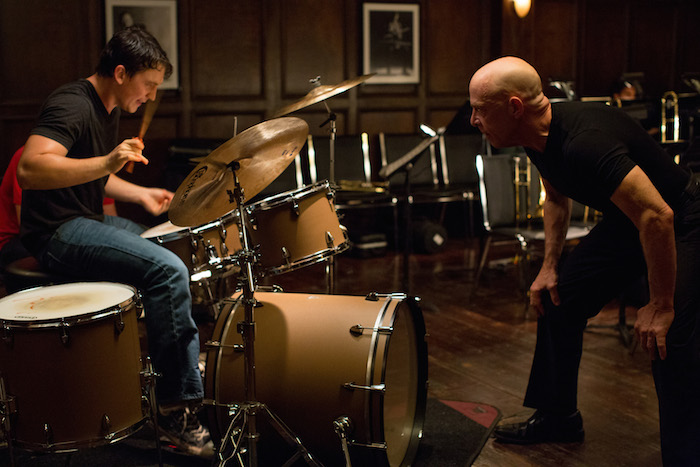 Neatly constructed, lovingly performed, tersely spoken, wittily japed, “Whiplash” finds a form from the rehearsal and performance of jazz and the rhythm of forceful, sustained percussion and audacious artistic drive. Miles Teller (“The Spectacular Now”) is Andrew, a young student at a music conservatory whose skills as a drummer are noted by martinet instructor Fletcher (J. K. Simmons). Fletcher’s a hard-ass, a drill sergeant in search of one perfect soldier of jazz who could approach what, say, Buddy Rich or Charlie Parker accomplished. Andrew has a line in callow determination and Fletcher is ready to wring his neck with constructive, if eminently cruel instruction. There are other lovingly cast performers, but it’s Teller’s and Simmons’ show.

The most sustained scene of the duo going toe-to-toe sutures the lean script’s every theme, and cements the immaculate performances of Teller and Simmons, a tour-de-force of cinematic willpower, a mano-a-mano of explosive orgasmic fury that enthralls while helpfully evading any kind of simplistic homoerotic charge between the two driven, exceedingly masculine souls. 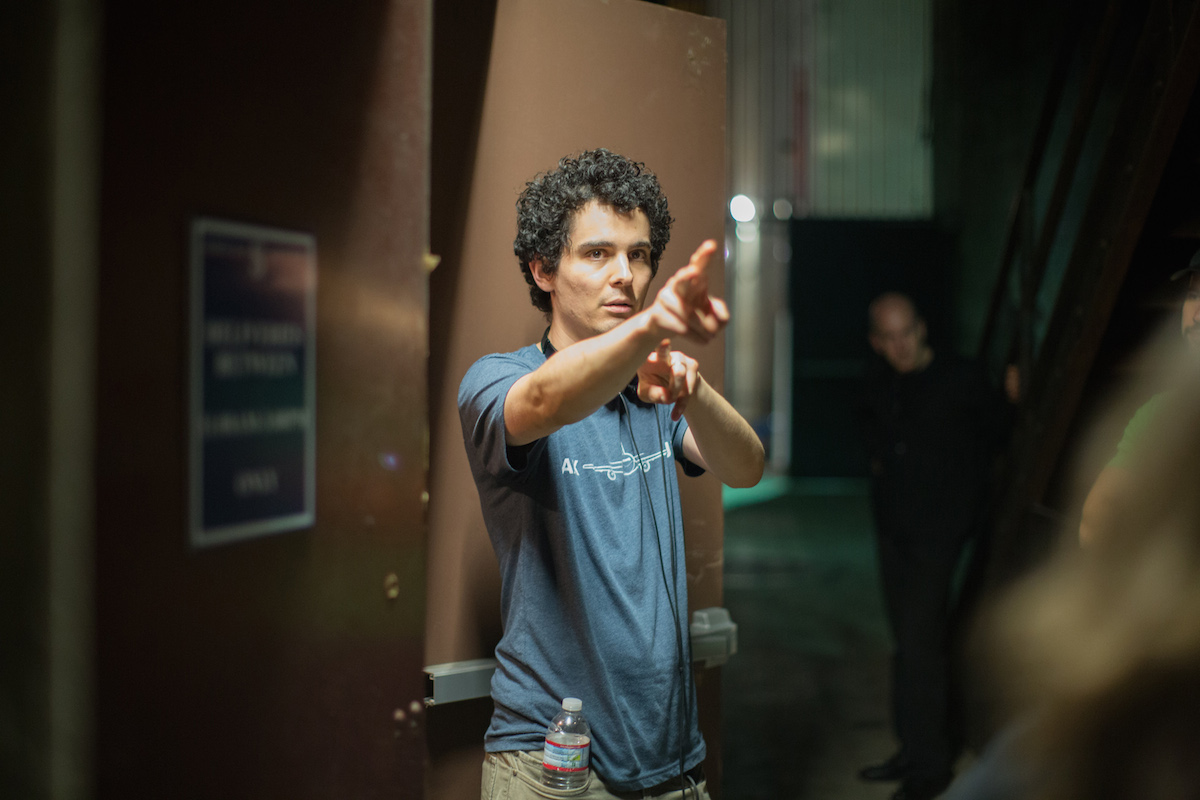 Simmons and Teller each possess presence that can flare brightly or sour to glower in a second, but it’s this scene that rockets the movie to glory. Chazelle had the contrast of bodies in mind. “It was kind of like, how do you make a movie about music that is as physical, physicalized, as possible?” the twenty-nine-year-old writer-director tells me. “I was thinking of dance movies and boxing movies, like a cage fight between two prizefighters going. I didn’t think at all while writing it about homoeroticism. That’s kind of under the surface. [But] I guess as soon as you really physicalize people in that way, there’s always a sexual side of it. But that just came out as a result. It was a fight, it was a dance-off, but it had to be something that was really about two bodies facing off.”

But “Whiplash” is also like a war movie, at times, Chazelle says, with the velocity of a car chase, and of course, it’s a musical, mindful of the form of jazz as well as of film narrative. “That’s like all my favorite genres,” Chazelle says, laughing. “I guess what I like, the common thread that runs between all those kinds of movies, is the idea of pure cinema, the idea that you set up a narrative structure of some kind, but the narrative structure is the means to the end. The end goal is to let stuff play. In the same way that a musical builds up to its numbers an action movie builds up to its action sequences, you need the structure, you need the rest of the stuff to inform [the storytelling]. What I love about musicals is that you can have Fred and Ginger doing their repartee for ten minutes, and then that builds naturally into a dance that recaps and comments on everything they said through dialogue before. There’s a give-and-take between different kinds of cinema in those scenes. But the kind that really gets my juices flowing is when people stop talking and when you can just tell a story through sound and image.”

Simmons is a great presence, but there are moments of sweet, small flickers of amusement and bemusement that cross Fletcher’s face that are simply sublime—it’s very much, are you fucking with me? “His face is so priceless!” Chazelle says. “It should be a national landmark, his face. It belongs on Mount Rushmore. It was a fun movie to edit. When the editor and I first put together the cut, it hung together more or less as a narrative. But it sucked. As most first cuts do. It was what it was, and there was no real emotional throughline. And then we did our second full pass, entirely focused on facial expressions. Certainly, for Miles, who spends most of the movie reaching to J. K. silently, and the other musicians. J.K., with all these little things in between lines. We realized that a lot of the emotion we needed from the movie was going to come just those little flickers across peoples’ faces. The movie’s shot a lot in close-up, so you can see those writ large.” 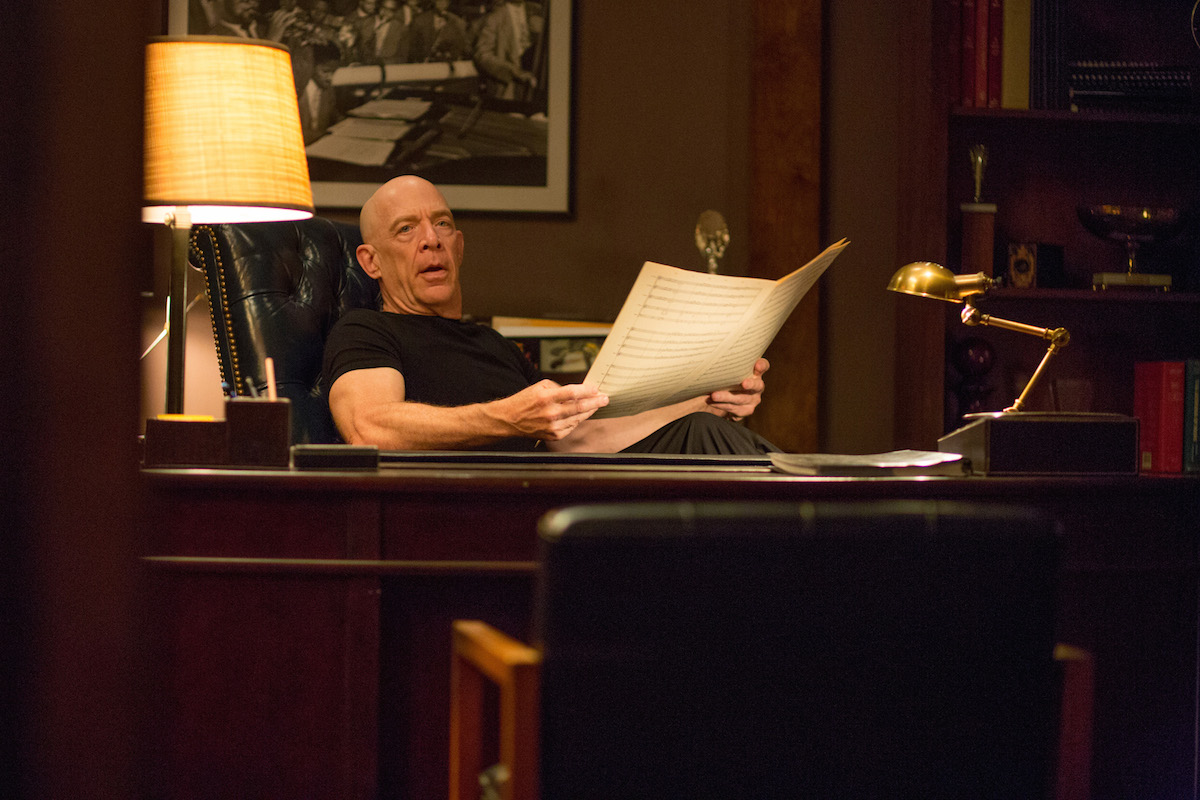 Close-ups in widescreen can allow for radically dynamic compositions. The negative space allowed on either side of a face can turn a composition into something like architecture. “Yeah, that initial idea [when CinemaScope was introduced], widescreen was only good for, what did Fritz Lang say, ‘snakes and funerals’? Widescreen was meant for this, because I wanted it to feel epic. To me, that’s the fun contrast. I guess the same way of thinking of putting a close-up in widescreen, take a really small claustrophobic world that’s really small, in boxed-in rooms, and do that widescreen. That gives you negative space, but it also gives you a sense of the epic that the subject matter wouldn’t normally lend itself to.”

“Whiplash” opens Friday, October 17 at Landmark Century and other locations. The clip below illustrates the dynamic between Simmons and Teller.