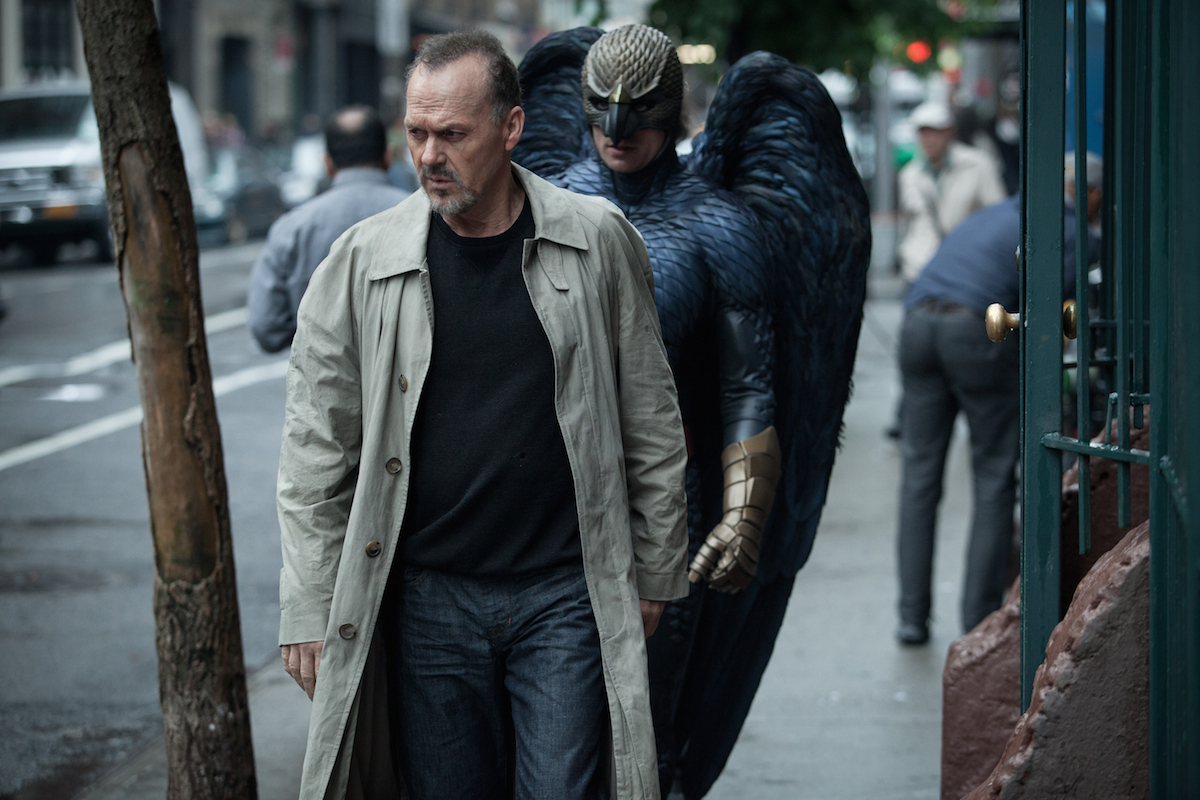 A rollicking meeting of Hitchcock’s “Rope” and Jimmy Kimmel’s couch, Alejandro G. Iñárritu’s “Birdman Or: (The Unexpected Virtue of Ignorance)” [punctuation sic] sizzles, scintillates, teases, taunts, barks, brays, preens and careens as a simulated single-take of almost two hours, sending up showbiz and its shallowness in profane if shallow style, but also the fractured, electrically flawed brain of its middle-aged protagonist, washed-up screen actor turned Broadway debutante Riggan Thomson (a fine, furious Michael Keaton). Thomson’s adapted, directed and stars in his own rendition of Raymond Carver’s short story “What We Talk About When We Talk About Love.” It sounds like a bad idea, but in the acting and enacting, it’s a terrible one. Opening with credits that ape the font and fashion of high-pop 1960s Godard movies, propelled by a smashing, crashing percussive beat like that of a Times Square street-corner drummer, “Birdman” is self-reflexive, self-important, overwrought, half-baked and completely glorious.

Co-screenwriter Alexander Dinelaris, Jr. also calls it “an example of Aristotle’s theory of ‘surprising inevitability.’” Indeed, everything that happens in “Birdman” (co-written by Iñárritu, Dinelaris, Nicolas Giacobone, Armando Bo) could be charted, but in its simulated present tense, depicting the live-wire life of theater in a medium that is always present tense, it is richly if erratically detailed. And that’s not limited to bits of performance by Keaton, Zach Galifianakis as Riggan’s lawyer and staunchly tense best friend, Amy Ryan as his eyes-wide ex-wife, Edward Norton, Jr., as a box-office beacon and gifted mountebank of the stage, Naomi Watts as Norton’s eminently taut girlfriend and Broadway debutante leading lady, Lindsay Duncan as an unlikely fellow drunk, a New York Times theater critic, Emma Stone as Riggan’s daughter, fresh from rehab and stinging from life, and the effortlessly luminous Andrea Riseborough as the last of the stage quartet and Riggan’s under-attended mistress. Topple, tumult, and a lot of what Lear was describing when he said, “Blow, winds, and crack your cheeks! rage! blow!” You could even go whole-hog and cite “Hamlet,” talking about a tale “told by an idiot, full of sound and fury, signifying nothing.” But a Messenger enters: from the opening shot that signifies anything will be possible in the next two hours, Riggan is wracked and ruined by an inner alter ego, “Birdman,” the superhero role he abandoned decades earlier (just as Keaton walked away from Batman before the costumes got nipples). The question is not, is Riggan going to go mad, but when and how and to what extent. The pitched talk is as furious as the relentlessly swooping camerawork by Emmanuel Lubezki (“Gravity,” “To the Wonder”) through the labyrinthine backstage spaces of Broadway’s St. James Theater, and while the characters’ furious cut-ups of cultural elitism, mad-glibs of preening superiority born out of unstanchable insecurity, aren’t convincing, the verve is daunting. Iñárritu says “Birdman” is about battles with ego, “the idea that no matter how successful you are, whether in money or recognition, it’s always an illusion. It’s temporary. When you are chasing the things you think you want and empower the people to validate you, when you finally get them, you soon find an impermanence in that joy.” Indeed, truly, and at battling, battering, teeming, tottering duration. I’m dying to see this mad fucker again. 119m. (Ray Pride)