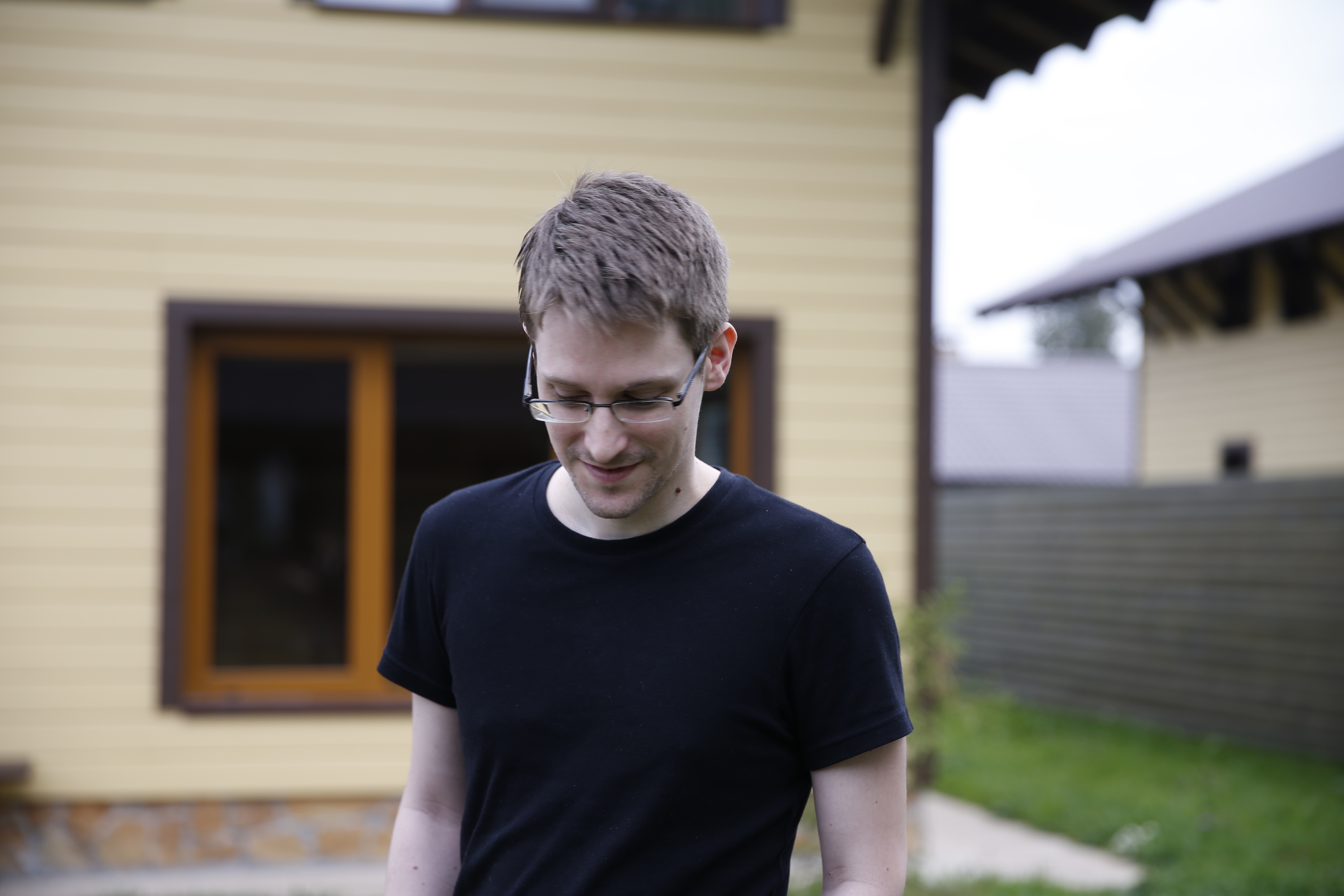 A stream of light, or a strip of luminescence courses above our heads. It’s inexorable, driven, fated. It’s also mute, dumb, like a laser pointer, or a torrent of data racketing across the internet to destinations that we do not know.

That image recurs through the first third of Laura Poitras’ serene, masterful, understated “Citizenfour,” until it is revealed as the illumination in a tunnel beneath the sea, until we see that we have been beneath Hong Kong, where the filmmaker will spend more than a week in a hotel room with only-just-former NSA operative/contractor Edward Snowden, and two journalists who were with the Guardian then, including fellow journalist Glenn Greenwald.

That image is typical of Poitras’ largely plain but sometimes plainly poetic visual style. Where someone like Errol Morris finds striking, expressionistic images that lie outside a traditional narrative to hint at larger forces at work, to elicit foreboding and dread, Poitras locates calm, simple things in what unfolds in front of her camera. Even the expository scenes that take place in hotel rooms, such as the extended central section with Snowden and Greenwald, frame off of a telling element of what should be ordinary décor. It’s geometric filmmaking, but it’s also psychologically acute in evocative, if mysterious ways. It’s so much more than conversation: it’s history unfolding, in present tense, in this near-featureless chamber.

“Citizenfour” is a documentary, an exposé, a character study, a world-girdling espionage thriller, an oblique manifesto and a model of understatement. It’s also a great movie. Since 2001, the American documentarian has been working on a post-9/11 trilogy about the state of the nation, which began in 2006 with the Oscar-nominated “My Country, My Country,” about Iraq, and continued in 2010 with “The Oath,” about the American prison camp at Guantánamo. During the time those films were made, Poitras was subjected to increasingly intrusive interference at the U. S. borders when traveling between countries, and she relocated to Berlin to continue her work. Her conclusion, “Citizenfour,” began as an examination of our current surveillance culture, when she was contacted in January 2013 by a source that turned out to be Snowden. There are revelations in “Citizenfour,” but its weight (and heart) lies in the central section as Snowden lucidly lays out the vastness of secret surveillance of citizenry, and in the assured pacing of the narrative by Poitras and editor Mathilde Bonnefoy. Some of what we learn of Snowden is practically galvanic, as glimmers of doubt, quick smiles or eyes widening with paranoiac caution crease his twenty-nine-year-old face. The stakes of the life he’s left behind weighing on him are implied by gesture more than declaimed in narration. Bonnefoy is the second secret weapon of “Citizenfour.” In the October 22 issue of The Nation, Poitras tells filmmaker-activist Astra Taylor, “I worked with a really extraordinary editor, Mathilde Bonnefoy, who has worked in fiction and documentary. She’s the editor of ‘Run Lola Run,’ an extraordinary film about the role of fate in our lives. The structure of the story is collaborative between myself and Mathilde, and it was probably one of the greatest collaborative experiences I’ll ever have.”

The collaboration of filmmakers and journalists and whistleblowers are woven into the calm of Poitras’ filmmaking, and coupled with the cool, rational demeanor of Snowden, stands in stark opposition to the fevers of the likes of senior Republican Congressman Mike Rogers of Michigan, who last week advocated the death penalty for Snowden. “By the way, and this is important, I would charge him for murder,” the high-ranked government official said. It “is more likely that one of those soldiers is going to get their legs blown off or killed because of his actions,” he continued. Snowden’s loquacity in describing the responsibility of a governed citizenry, as well as the elemental passion he expresses for American ideals, stand in stark contrast to such grandstanding, and elevate what could be merely technical talk about “metadata in aggregate” and how billions of conversations could be (and are) siphoned into the data coffers of the government and its contractors each day to something approaching manifesto. The imperturbable calm of the penetrating filmmaking of “Citizenfour” holds reservoirs of disappointment, anger and finally, wellsprings of hope.

Of the film’s form, I also like what filmmaker Aaron Stewart-Ahn wrote on Twitter this week, making the film sound as much like a novel by William Gibson as a thriller to the manner Bourne: “’Citizenfour’ is an ambient portrait of the crushing weight & dread of the surveillance state we’ve bought into. Will be watched for decades. Some say ‘Citizenfour’ doesn’t say anything we don’t know from news; untrue. The tonality of now, laptops challenging power in hotel rooms. Maybe the ‘news’ in ‘Citizenfour’ isn’t new, but we still haven’t done anything about implications of this information yet.” 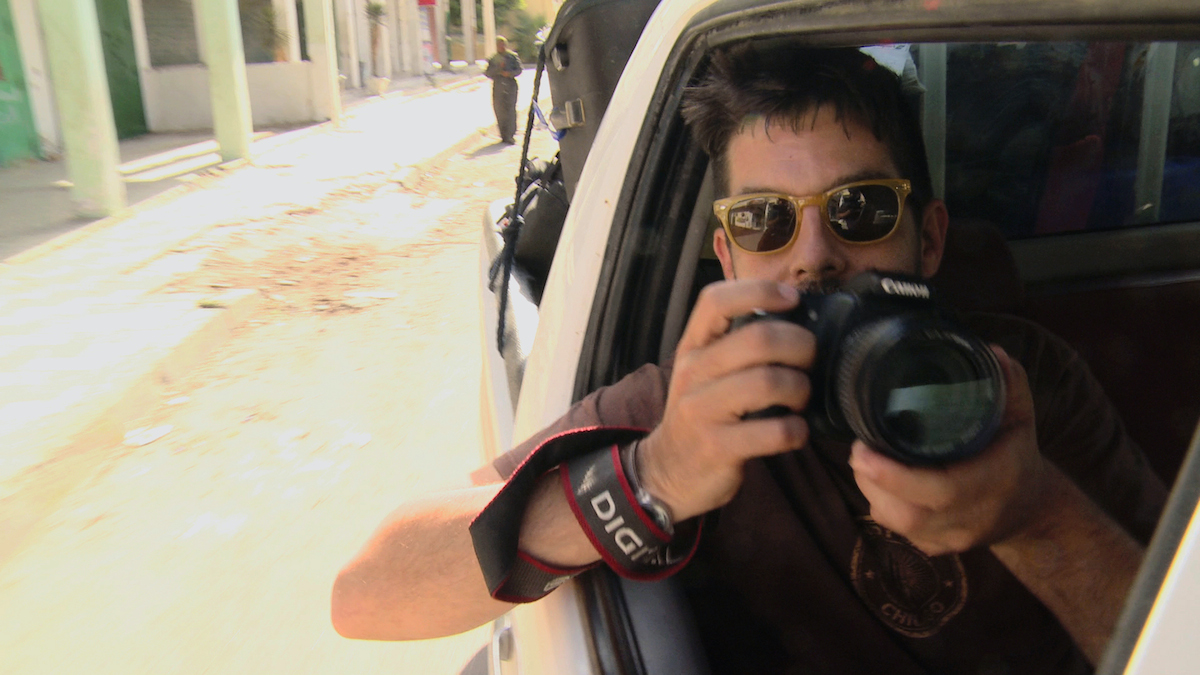 Another gorgeous documentary of seductive form but serious sentiment is Ross Kauffman and Katy Chevigny’s “E-Team,” winner of the 2014 Sundance Jury Award for documentary cinematography. “E-Team” follows the investigative work of four human rights investigators from the “Emergencies Team” of the group Human Rights Watch, who seek actionable evidence on the ground in countries like Syria and Libya. Kauffman and Chevigny combine the tenets of cinema vérité observation with the trappings of a trans-European thriller to tremendous effect: we learn as much from the intimacy of the workers’ collaborations as from the crimes they detail from testimony and other evidence. Their personal lives don’t detract from the larger portrait, but enlarge it, as documentarian Heidi Ewing tweeted about “E-Team” a few days ago, it “makes me want to be a brave, chain-smoking broad in an abaya. Gives human rights sex appeal.”

The personal is political, and both “Citizenfour” and “E-Team” demonstrate that again and again by witnessing their subjects’ sober, optimistic rhetoric and philosophy, but also the personal things, small and large, that make them human and keep them honest.