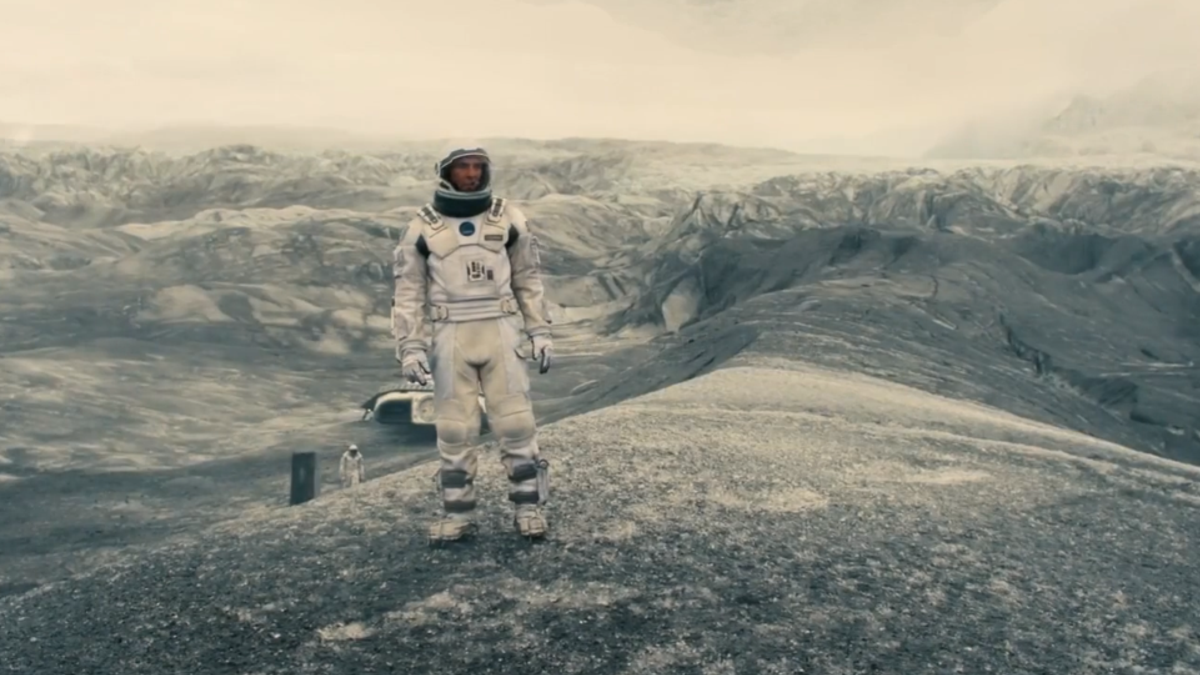 The crash of two separate commercial spaceships barely a week before the opening of “Interstellar” had a poignant resonance for the film, which makes an unabashed case for spaceflight of the government-backed NASA variety. It argues, in effect, that giving up on the space program not only reflects a deadening of the progressive spirit of exploration imbedded in the American soul, but could potentially threaten the human race’s ability to survive in the long run. With this picture, set in a not-too-distant future where some unexplained but apocalyptic degeneration of the planet’s agricultural foundation has led to impending starvation of the species, co-writer and director Christopher Nolan shifts from the murky nether-regions of his “Dark Knight” outings to gaze heavenward. Cooper (Matthew McConaughey)—widower, father and noble farmer—is haunted by his past as a pilot and our past as a society that once leaned toward enlightenment. Though McConaughey’s recent accomplishments on screens big and small have been of the ambiguously shaded, almost anti-hero variety, the only brooding uncertainty from this hero will be whether he made the right choice when he left his kids behind to head to space and save the human race.

In collaboration with DP Hoyte van Hoytema (“Her”) and production designer Nathan Crowley, Nolan’s cinematic craft is superb, and for two-thirds of its nearly three-hours running time, the film is an enthralling visual feast, a sophisticated exploration of contemporary astrophysics at its most mind-blowing. The interstellar imagery overtly recalls those “blue wonder” images of earth from space, those old IMAX movies about NASA missions; Nolan shot about a third of this picture with an IMAX camera. (See it big.) The earthbound visuals are just as engaging as deep space, with lush expanses of cornfields, farm houses and small-town suburbia. The post-America of “Interstellar” is unsettling in its calm and familiarity; its dust-bowl apocalypse seems far more likely than the usual armageddons. Hans Zimmer’s orchestral score is a character itself; sometimes drowning out the dialogue, then, at other times, receding to complete silence. That space is a very quiet place is one of the unspoken messages of the film, the kind of detail that enriches its experience.

Nolan creates a seemingly plausible narrative out of frontiers of science, black holes, wormholes and quantum physics, taking ample liberties but hewing to a fundamental consideration of the interplay of human nature and nature nature. Alas, though, there’s one immutable principle he could not bend in the end: that any film costing more than a hundred-million dollars must have a Hollywood ending. The result is a profoundly disappointing third act, artistically, that sees Nolan striving for Kubrickian heights but settling for Spielbergian tropes. (Even the cleverly conceived robot TARS, Miesian in design and HAL-like in resonance, succumbs to a late bout of C3PO chattiness.)

Not that a tidy resolution is inherently wrong; it’s just wrong here. Nolan’s a master of intricacy of images, text and ideas; emotions, which drive the resolution, seem to be a bit more challenging. Tensions between Cooper and his children over apparent abandonment are deeply moving in the first two acts; so too are bits of literary reference like “Heart of Darkness” and the elder Dr. Brand’s (Michael Caine) citation of Dylan Thomas’ “Do not go gentle into that good night.” Alas, though, perfect touches turn to sucker punches by the end, through excesses of repetition of theme and text.

When, early on, his daughter is reprimanded for rejecting the now-official line that the Apollo space missions never happened but were simply a propaganda exercise designed to bankrupt the Soviets, Nolan’s foreshadowing one of the movie’s overarching themes, that science deniers are dangerously ignorant. But he too, forgets his own message later when all-science co-protagonist Brand (a one-dimensional Anne Hathaway playing the daughter of Caine) declares that love might yield truer science than, well, science. Hathaway’s Brand exemplifies the stumbles the picture suffers when it tries to evoke emotions: she’s the only female on board, for years, and yet sexual tension of any variety is wholly absent. After she introduces the word “love” in her monologue it becomes a stiff platitude for the balance of a film that once seemed destined to soar above greeting-card inscriptions. But for two hours, “Interstellar” is a force of wonder, a project determined to restore faith in our destiny among the stars, and in our romance with the big screen. Perhaps that’s why its crash and burn hurts so much. (Brian Hieggelke)

“Interstellar” opens in IMAX and on select 35mm and 70mm screens on November 5. It takes over the universe of the multiplex on November 7.