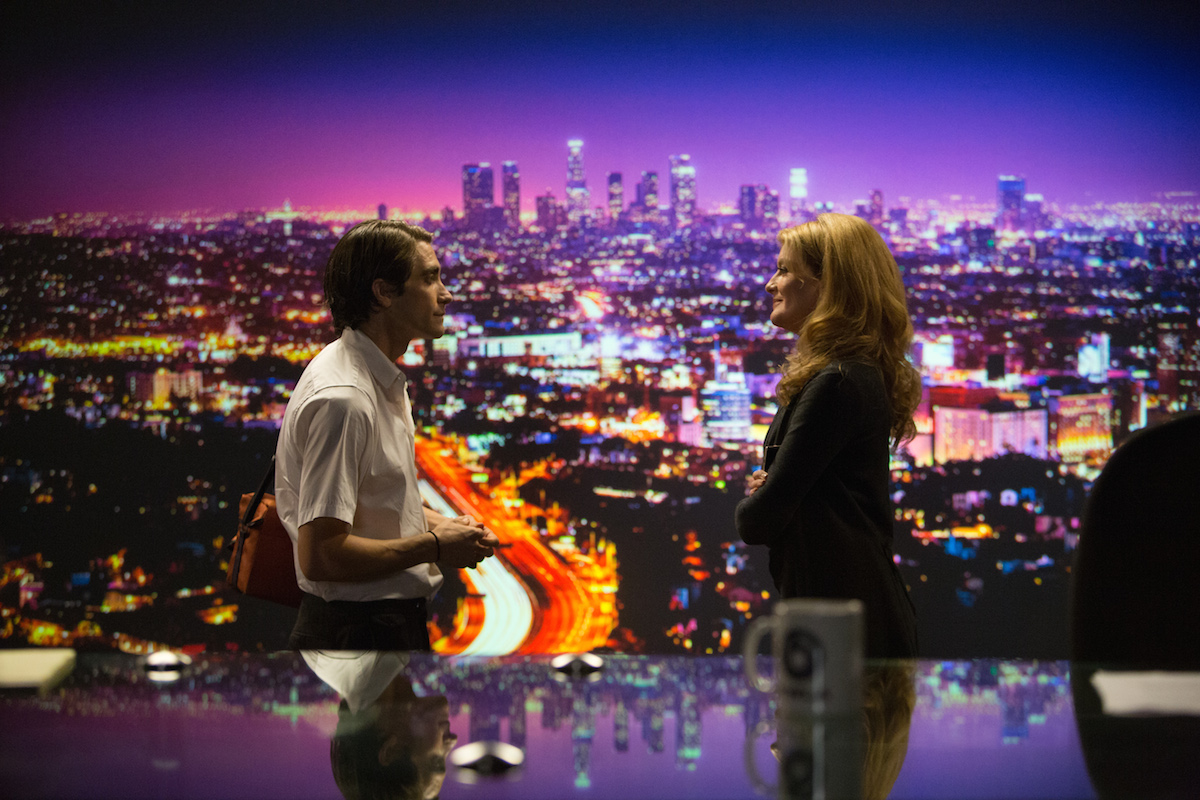 Shot in a few weeks of nights across Los Angeles, “Nightcrawler” has two topographical advantages. There’s the glittering gulch of Los Angeles by digital dark, sheerest shadows coming to life as the camera crisscrosses the glittering, malign shape of its story. As shot by Robert Elswit (“There Will Be Blood,” “Michael Clayton”), the directorial debut of screenwriter Dan Gilroy (“The Bourne Legacy”) makes the low-to-the-ground desert city look like a parallel to the hellish landscapes of 1970s New York City in Martin Scorsese’s “Taxi Driver.” The greatest range of topography, however, plays over the gaunt features of Jake Gyllenhaal, eyes wide, nearly unblinking, cheekbones like a hungry wolf. His Lou Bloom is a lone wolf, too, a nattering autodidact, out of work, who finds his calling in snaring news footage for local news that others recoil from: bloody, up close and yet impersonal. “Nightcrawler” wears its influences on its sleeve, its “Taxi Driver” citations not limited to an interview scene that’s patterned after Travis getting a job at the taxi garage. Lou’s a bit of a Rupert Pupkin, too, a king of comedy in his own mind, brash, making promises that fall from his tongue as fast as his mind can fashion them. Billy Wilder’s 1951 journalism satire “Ace in the Hole” comes to mind, but there’s something much more contemporary to the movie’s neo-noir look and feel, even if some of the newsroom figures’ moral dudgeon over the likes of TMZ are ever so slightly dated. It’s a star vehicle: a dark star. Gyllenhaal’s willingness to land in the center of a movie like this or Denis Villeneuve’s “Enemy” speaks well of his ongoing career, but it would be wrong not to keep your eyes fixed on the focused mania of his Lou Bloom. With Rene Russo (the director’s wife) as a local TV news director who buys Lou’s footage if not his line in lovemaking, the great bit player Bill Paxton as a glib newshound Lou lifts his ideas from, and Riz Ahmed as an assistant even more naïve about the world around them. 117m. Widescreen. (Ray Pride)