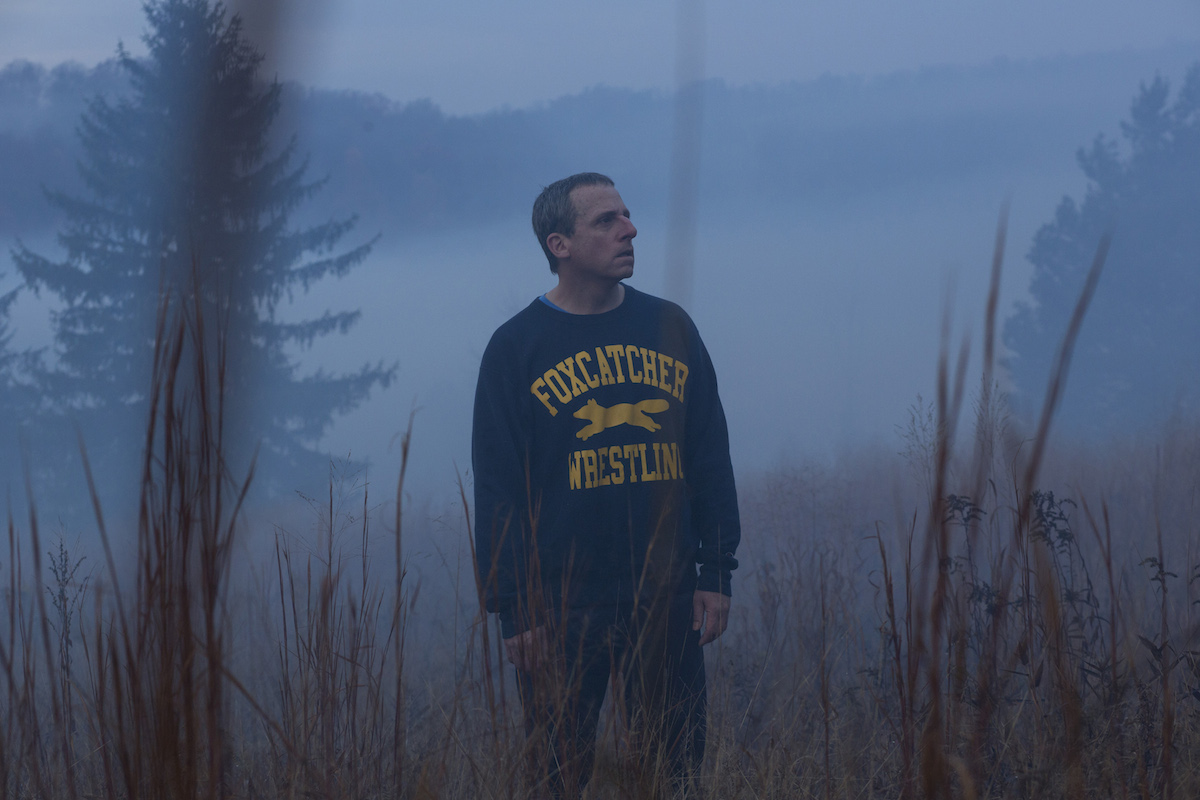 I’m starting to like this guy Channing Tatum. And maybe this guy Steve Carell.

The faith of Steven Soderbergh and a few other directors in his innate charm, screen presence and acting chops gets another workout as Mark Schultz, one of two brothers who won Olympic Gold Medals. Tatum’s physical moves are crabbed and weighted as we see Mark move through the gloom of his day: he’s Sisyphus before the Xanax. And this Sisyphus needs it: he’s bearing the weight of a few worlds in dark, cold Wisconsin. Broke, lunching on ramen noodles, grappling with his wrestling-coach older brother, Dave (Mark Ruffalo), he’s only got the 1988 Seoul Olympics to look toward. (Ruffalo’s 1980s beard and balding hairstyle are another feat of heaviness.)

Steve Carell, he’s another story. I’ve missed a few movies he’s been in, have never seen more than a few seconds of “The Office,” and regret it for not a second. Voice and presence alike, he’s anti-screen charisma to my eyes and ears, a terrifying dark void in front of a camera. (There are some other actors like that; most moviegoers know a pill or two.)

But leave it to Bennett Miller, the director who made his friend Philip Seymour Hoffman, a bruiser of a man, into Truman Capote, to cast Carell ideally. As John Eleuthère du Pont, Carell embodies the dank side of privilege and money and American manhood gone to stinking rot in Miller’s bleak, harrowing, but thrilling true-life murder case from a heavily researched script by E. Max Frye (“Something Wild”) and Dan Futterman (“Capote”).

Hulking in his own dissipated fashion, skulking the Foxcatcher Farm in Pennsylvania near Valley Forge, owned by his disapproving mother (Vanessa Redgrave), du Pont turns his inheritance toward controlling the Schultz brothers, first investing in Mark, and eventually Dave, into his orbit. He’s an odd benefactor, and his motives remain opaque. His eyes are hollow, his post-patrician honk of a voice almost comical to himself. There’s also an immense nose appended to Carell’s face, a piece of prosthetics as dead and deadening as Dirk Diggler’s at the end of “Boogie Nights.” Hardly suppressed homoerotic urges bristle as du Pont anoints himself head coach, but he’s equally invested in his own drug-driven despair. He also gets Mark to join in his games, although Mark resists the bouts of drunken late-night grappling that du Pont wants to include in his portfolio. A highlight of the movie is a helicopter flight in which du Pont has Mark rehearse a speech he’ll be giving to introduce du Pont as a “golden eagle” of American society. Mark stumbles over the phrase “ornithologist, philatelist, philanthropist” and Carell repeats it with increasingly slurry relish. Du Pont draws out a custom case filled with vial upon vial of cocaine, serves himself some, shares, berates, repeats: “Ornithologist, philatelist, philanthropist.” The more you hear it, the more desperate and winded and terrible it sounds. “Ornithologist, philatelist, philanthropist.” It’s Carell’s finest moment. As he invests himself in this indolent, filthy-rich heir John du Pont, slime has seldom seemed so All-American.

A typical asset is Miller’s use of understated iconography (with maybe one or two telling appearances of a U. S. flag) seething beneath the surfaces of a cold, near-frostbitten blue-to-gray palette. “Foxcatcher” is hypnotic in its gloom. Is this American masculinity? In a deep freeze, seeking approval from those who might exploit you? (Mother; coach; coach-brother; coach-father; coach-sexually repressed man.) There are bruising nuances in each coolly constructed scene, and even before the deadly end, devastation eddies outward. Miller’s having no truck with fate: he’s more interested in how systems allow, even enable shallow dreamers to destroy themselves with their single-minded passions. You’re an athlete! You’re untouchably wealthy! The American Dream is yours. Here it is. Create yourself. Create a self-image to protect yourself once you fail at self-creation. “Ornithologist, philatelist, philanthropist.”

“Foxcatcher” is overwhelming, but irresistible if you can stand a movie being so cold to the touch. It even makes a reluctant viewer like me start to like Steve Carell for having the will to capture a true shit, a character of such refined impurity, borne by elevated self-love without an iota of self-awareness.