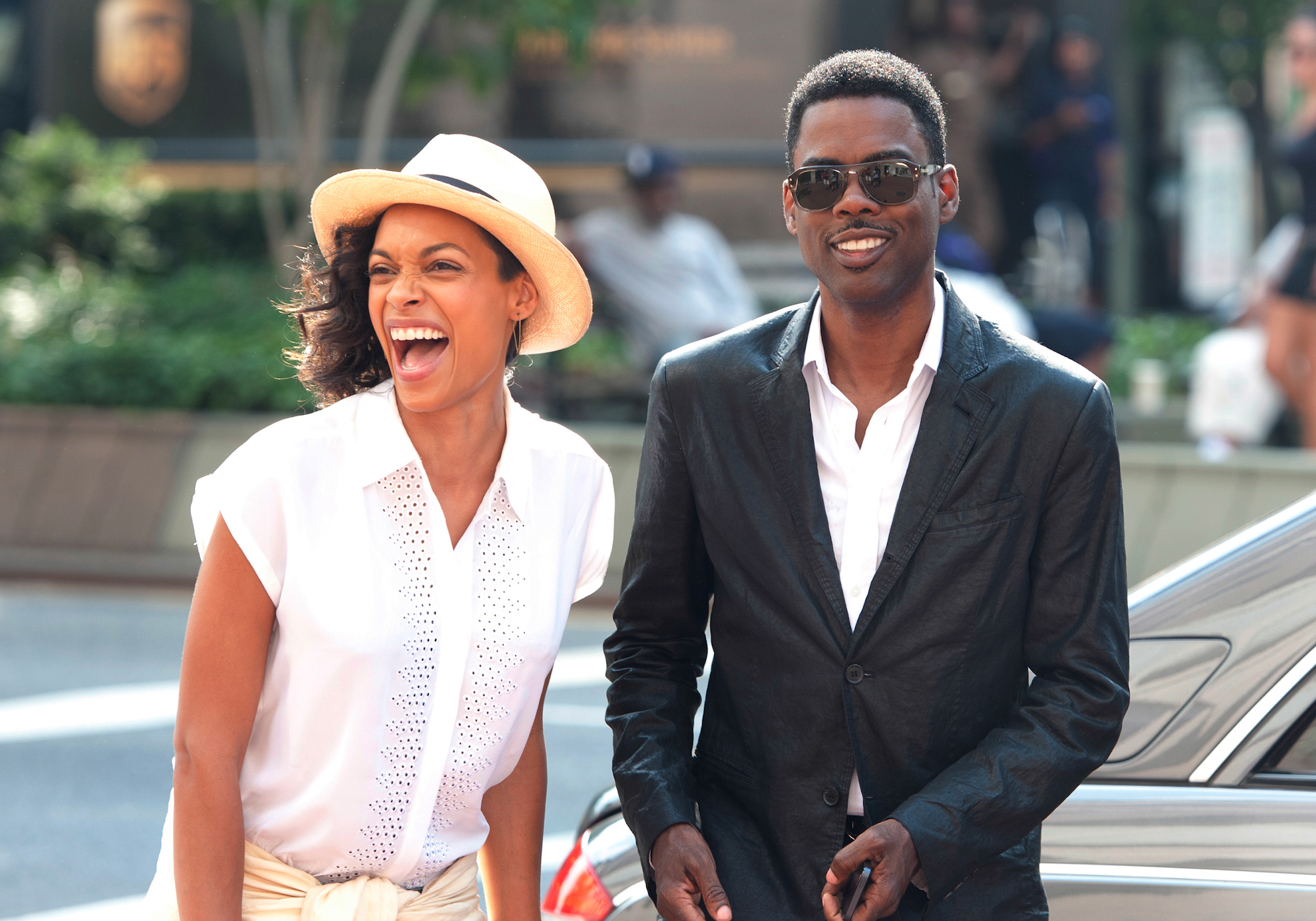 Middle-aged man faces crisis; sober man wonders if he’s still himself; “rigorous honesty,” a la AA, “rigorous fucking honesty,” runs riot. I don’t know if “Top Five” is great, but it’s the first comedy since “The LEGO Movie” I’ve found myself in simple awe of: ragged and rumbustious, assured and sincere-seeming, it’s, well, awesome. Chris Rock’s frank, personal, semi-autobiographical, ferociously twenty-first-century comedy feels like its own special animal, all sorts of goodness and bluntness and, okay, bright even brainy greatness, with equal parts “Annie Hall,” sometimes-collaborator Louis CK’s “Louie” and a little bit of “City Lights” and Cinderella and more Chaplin (“the Grandmaster Flash of haha”) by the way of Jerry Lewis by the way of Chaplin’s song, “Smile.” This sweet small crazy blunt bittersweet dirty fucky comedy vaults in every moment into a superior comic stratosphere. (With minor, wheedling cavils about whether some attitudes are the characters’ or Rock’s: there’s a bit about a white man’s wiggly-woggly-waggly ass as eye-widening as the horrendous female feet in Reggie Hudlin’s “Boomerang.”) The slipstream structure of flashbacks within “Top Five”’s single-day narrative of a comedy star doing press with a New York Times journalist (Rosario Dawson) just as his first serious film is opening leans adventitiously upon “Annie Hall,” but Woody Allen has never cut to the quick with throwaway lines like Rock’s “It’s hard to fuck somebody on a pedestal.”

So many little details sing, including a man spying opportunistically the moment the opportunity comes, into a woman’s cellphone, discovering all manner of chicanery best left unknown—“I was looking for naked photos,” not what he found—and a sendup scene of a press junket that includes MTV’s Josh Horowitz and the insufficiently legendary Stephen Schaefer of the Boston Herald. There’s also a scene where the characters played by Rock and Dawson pause to ponder the loves of their alcoholic lives in a liquor store that chills with its simple truth. Rock’s second directorial outing was a remake of a Eric Rohmer film, co-written with Louis CK; with “Top Five,” his artiness and his standup meet and make beautiful love in the public square that is Manhattan and the Manhattan of the collective imagination. Plus, unlike Allen and Rohmer, “Top Five” features, to put it indecorously, the hugest fucking come stains I’ve ever seen in a studio-released movie, an epic setpiece that ends up in clouds of feathers, humiliation, and an improbable, massive oil slick of human effluvia upon high thread-count finery. There’s a raft of cameos in one of the most bustling of casts in memory, plus a sense of space you wouldn’t see from certain filmmakers. As Rock puts it in an interview in the press kit, “I love New York movies. I love Woody and Nora Ephron and Spike. But one thing I always notice about movies in New York—it’s not even a bad thing, but they always take place in one part of New York. It’s very segregated. It’s like they happen just in one part of the city. My New York shifts economically a lot, you know. One minute you’re in the projects, and one minute you’re at a press junket, and those things can be five minutes apart. In New York, you’re always five minutes away from the projects no matter where you are. It’s the beautiful thing about New York. Let’s hope that never disappears. The poor and the rich kind of live close by. And I wanted to see that in the movie.” And so we do. 101m. (Ray Pride)