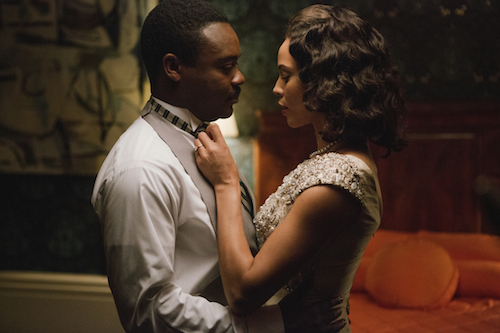 History, written in lightning: writer-director Ava DuVernay’s third feature, the understated yet righteously furious “Selma,” beautifully dramatizes and contains a few crucial months in the civil-rights movement and the life of Martin Luther King (David Oyelowo, electric). It’s 1965 in Alabama, but “Selma” moves with the immediacy of the present tense. King and other organizers are orchestrating mass marches to support voting rights, starting from Selma, after the 1963 church bombings that killed four small girls, to the capital of Montgomery. DuVernay observes the larger sweep, but also smaller details: this is not a History Lesson (except in a few tiny instants) nor are her characters Historical Figures. (“Selma” and Oyelowo’s accomplishment is even greater once you account for the copyright on the speeches of King that prevented their incorporation except by allusion.) “Selma” also functions as a galvanic artistic response to the indignities of today, where one major political party works to choke voting rights of citizens, and the other allows them to with little public opposition. Once conflicts erupt on screen, the style engages the action with the discombobulating acuity of a war cameraman, another element in the accomplished photography by the gifted cinematographer Bradford Young (“Middle Of Nowhere,” “Mother Of George,” “Ain’t Them Bodies Saints,” “A Most Violent Year”).  With Cuba Gooding Jr., Alessandro Nivola, Giovanni Ribisi, Common, Carmen Ejogo, Lorraine Toussaint, Wendell Pierce, Oprah Winfrey, Andre Holland, Tom Wilkinson as LBJ, Tim Roth as Governor George Wallace. 127m. (Ray Pride)

“Selma” is now playing at River East and ICON and goes wide on Friday, January 9.