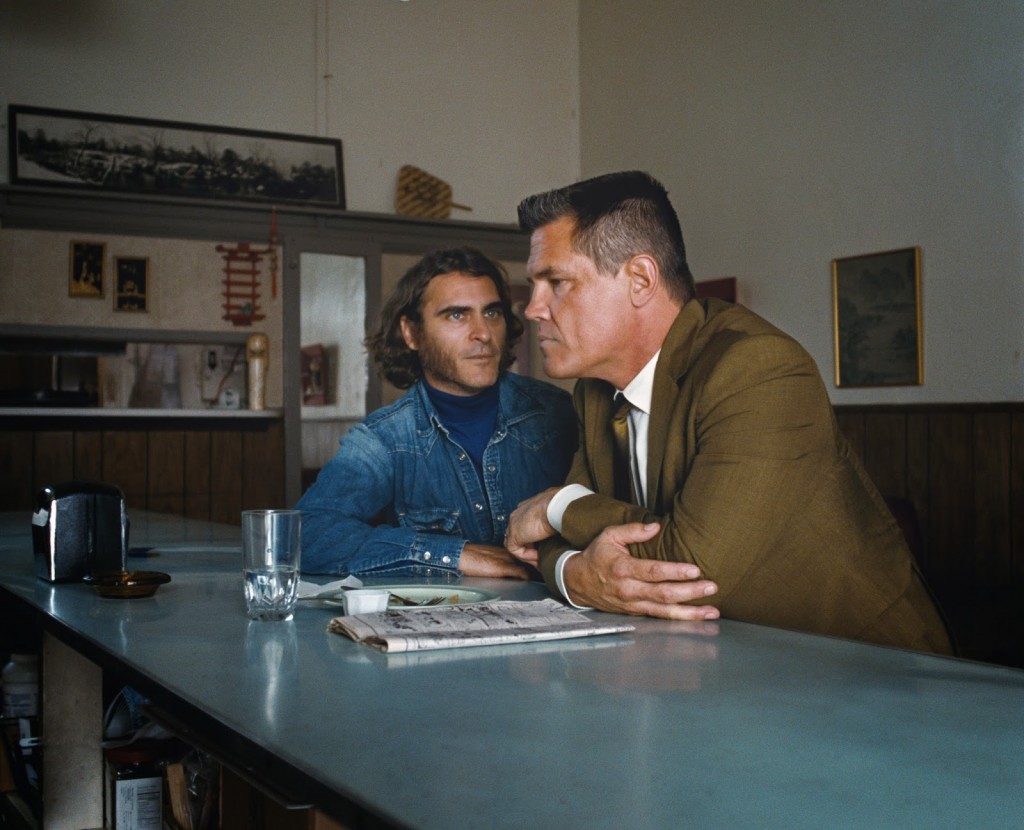 For his seventh idiosyncratic feature, Paul Thomas Anderson situates “Inherent Vice,” Thomas Pynchon’s 2009 fractured fairytale of private eyes, lingering love, the power of overlapping narcotics, and the death of the sixties in his birth year of 1970, to fractiously comic but almost militantly melancholy ends. In the novel, Pynchon describes that small moment when radical hopes and stoner joy had punched a hole in the sky as “this little parenthesis of light.” In Anderson’s adaptation, nearly as rife with cross-references and richly oddball dialogue as Pynchon’s prose—liberally invoked both spoken and in narration—comedy and tragedy align in the lovelorn figure of P.I. “Doc” Sportello, a doofus in a daze rendered with the most precise of physical acuity by Joaquin Phoenix in 1970s-era Neil Young drag, replete with a munificence of muttonchops. Perhaps not-so-jokingly, Anderson has cited Zucker-Abrahams-Zucker productions like “Police Squad” in finding a visual style for his actors to inhale and pop within: the bumptiousness of the sight gags on screen ranges from “Police Squad” non-sequitur to wide frames filled with action-reaction that are worthy of silent comedy. But despite the raft of cartoonish characters given full breath—let us especially salute Josh Brolin’s genial Neanderthal cop Lt. Det. Christian F. “Bigfoot” Bjornsen, of the butte-like flat-top and serial oral fixation—the ever-spiraling thriller-cum-thriller satire is ultimately about Doc’s melancholy over his missing “old lady,” Shasta Fay Hepworth (Katherine Waterston), whose disappearances and reappearances, of course, bring down an endless stream of clues to the besandaled gumshoe’s shaggy head like a cartoon wall of bricks. The detective. The dame. The weed. The Golden Fang. (The Golden Fang?) And so much rich Pynchonian wordplay out of the mouth of minor character-elevated-to-narrator Sortilege (Joanna Newsom). Anderson’s given a handful of interesting interviews, but the most interesting quote about approaching the adaptation of Pynchon may be this elemental observation from the press kit: “Pynchon himself said it best in ‘Gravity’s Rainbow,’ ‘Paranoids are not paranoid because they’re paranoid but because they keep putting themselves, fucking idiots, into paranoid situations.’ Paranoia is also very, very fun to film—people and noises and creeping around corners—it’s all very cinematic. And Joaquin does paranoid very well.” “Inherent Vice” lives within exceptionally rich, and sorrowful, parentheses. (And within those parenthesis is the powerful influence of Anderson’s friend and mentor, Robert Altman, whose “The Long Goodbye” surely induced some of the most shaggy-dog of shrugs Doc tries to protect himself within.) Jonny Greenwood’s score sits nicely aside music from Neil Young and Can. With Owen Wilson, Reese Witherspoon, Benicio Del Toro, Jeannie Berlin, Hong Chau, Jena Malone, Maya Rudolph, Eric Roberts and, yes, oh my, Martin Short, oh god, Martin Short. 150m. Widescreen. Shot on 35mm by Robert Elswit (“There Will Be Blood,” “Nightcrawler”). (Ray Pride)