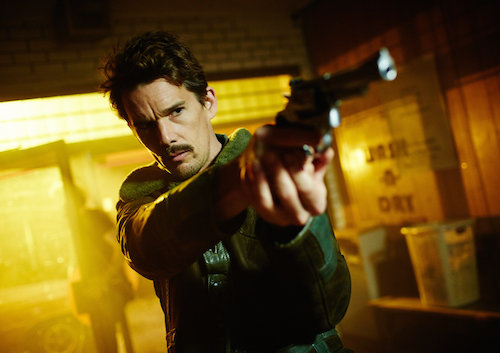 Simple strangeness is in short supply in twenty-first-century wide-release movies, but the sibling directorial directing team of Michael and Peter Spierig (“Daybreakers,” 2009; “Undead,” 2003) deliver again with their bits-and-pieces approach to low-budget surfaces and spaces. “Predestination”‘s conceptually clever, if ultimately confusing tale quietly accommodates some serious gender-bending, drawn from Robert A. Heinlein’s short story, “All You Zombies.” The plotting has its wonky similarities to the likes of “Timecop” and “Looper” and any number of time-carving trick narratives. Still, twists both blatant and teasing motor the mystery along, and a cannily termite performance by Ethan Hawke as a bartender-cum-enforcer is surpassed by Sarah Snook as a patron-cum-storyteller who may be the punchline to his very own story, one final time. It’s the matter-of-factness that satisfies amid the plotting of “Predestination.” “Predestination” received the most nominations (nine) for this year’s Australian Academy of Cinema and Television Arts awards, including Best Film. With a most agreeable small role for Noah Taylor. 97m. (Ray Pride)