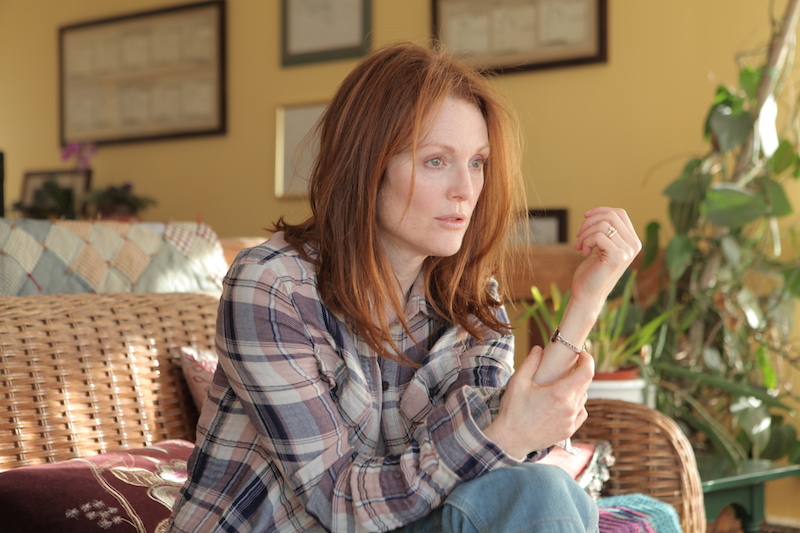 Stress and tranquility alike fall readily on the features of Julianne Moore: in her fifties, the finery of her porcelain, ginger-freckled face is as expressive as that of any working actor today. The most zoned and delicate of her performances, in Todd Haynes’ great “Safe” (1995), is again available to be seen, in a restored edition by Criterion. But the poles of her temperament are also on view now, in two films that have been on the festival circuit and are arriving in theaters now. David Cronenberg’s “Maps To The Stars” will be released in a few weeks, replete with a marvelous Moore performance as an actress whose hunger for a role to validate lost youth and a lost mother may be one of her most fierce. In “Still Alice,” by Richard Glatzer and Wash Westmoreland (“Quinceañera,” “The Fluffer”), Moore embodies another nightmare, in the role of a linguistics professor with three grown children who begins to misplace words. Glatzer and Westmoreland, adapting a novel of the same name by Lisa Genova, surround her with family and colleagues—all well-cast, including Kristen Stewart and Alec Baldwin—but it’s Alice’s doomed determination to resist her diagnosis of early-onset Alzheimer’s that provides the drama, the terror, the horror, the seeping away of personality. Glatzer has cited Ozu as an influence, and “Still Alice” honors the Japanese master’s serenity unto nothingness. With Hunter Parrish, Kate Bosworth. 99m. (Ray Pride)