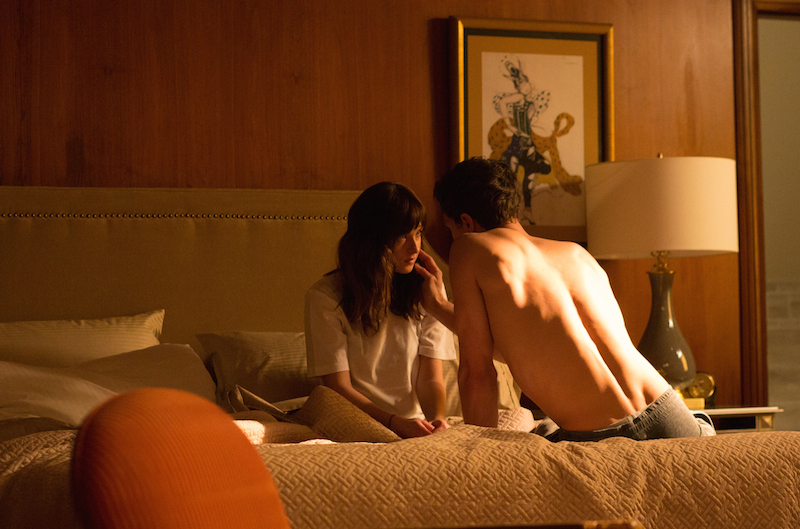 Nowhere near wet and baring not a sign of chafing, Sam Taylor-Johnson and screenwriter Kelly Marcel’s sanding down of the rank, rankling crudities of E. L. James’ bestselling repurposed “Twilight” fan-fic trilogy, “50 Shades Of Grey” still shocks, but instead for its light-handed sense of humor rather than settling for being a clinical depiction of the acts (and actions) of B&D and S&M and a recitation of the insipid, run-on interior monologue of the book.

Also, depicting callow corporateer Christian Grey (Jamie Dornan) as a blank object of desire for college student Anastasia Steele (Dakota Johnson). Christian is also little more than a petulant stalker, a privileged predator, making demands and gestures for her erotic attentions, and the power games are turned in almost every scene. Where the Irish Dornan struggles with an American accent and to come across as a fully fleshed human, Johnson’s performance is breezy and calculating, and effortless charm brims from each moment she’s playing that player. Johnson deploys a variety of quirky chuckles, disarming in the face of the silliest things demanded by Christian. Who’s submissive now? Dornan, who resembles a plainer-faced, non-actor Michael Shannon, also bears the burden of the film’s bluntest dialogue, including “I don’t make love, I fuck,” and “I’m fifty shades of fucked up!” delivered with his back to camera. (He’s far enough back into the shot that it’s impossible to tell whether or not Dornan’s shoulders are trembling with laughter.)

Set in Seattle but largely shot in Vancouver, “50 Shades” boasts a splendid rain-blue-to-gray palette, courtesy of cinematographer Seamus McGarvey, whose films include “The Avengers” and Taylor-Johnson’s own exemplary, grotty teens-shoplift-Buzzcocks-music-and-fuck 2008 short, “Love You More,” which boasts a far more bumptious form of giddy heat than any given moment here. McGarvey’s light highlights the splay of freckles across Johnson’s cheeks and the line-defined upturn corners of her mouth in moments where she laughs with dorky surprise, or her eyes widen at a demand of Christian’s that Anastasia finds incomprehensible, or foolish, but also of momentary intrigue. The daughter of Melanie Griffith and Don Johnson, Johnson has a 1970s-fashion, wide-blue-eyed, kittenish face, with her shoulder-length brown hair furnishing a resemblance to Jane Birkin as well. The favor’s not returned to Dornan, his Christian pictured as waxy and fretful, except when his muscular torso is on display. His chest and abdomen comprise most of his sexual display, with even the scenes nearest to actual BDSM play finding him only with his jeans riding down on his hips. His abs are better defined than the character’s motivations. (While Johnson’s also bare-chested, she’s discreetly nude in their scenes together; as for Christian’s johnson, there’s a single glimpse of the base of the shaft of his cock peering from the generous nest of pubic hair that rises from his unbuttoned fly.)

Christian and Anastasia move through a world of shiny surfaces and sleek products, as if in a parallel-universe Nancy Meyers film, courtesy of production designer David Wasco (“Pulp Fiction,” “The Royal Tenenbaums”). Consume or be consumed, as it were. The intriguing pedigree of technical talent extends to the trio of female editors, Debra Neil-Fisher (“Austin Powers,” the “Hangover” movies), Lisa Gunning (“Love You More”) and Anne V. Coates, whose credits include “Erin Brockovich,” “The Elephant Man” and the film for which the eighty-nine-year-old cutter won her Oscar, 1962’s “Lawrence of Arabia.” Coates also cut the most melancholy and lavishly adorned of Adrian Lyne’s infidelity dramas, “Unfaithful.” (Lyne’s also kind of an uncle to Taylor-Johnson’s design approach: faces, shoulders, highly characterized decors and objects in distinctive living spaces.) Add a frisky score by Danny Elfman, and it’s all a slick, pretty package.

But. What about the sex? What about the bondage? In our time of porn-at-a-click, it’s more indicated than performed. And the psychology doesn’t pass the simplest of tests: Christian was submissive to an older woman while a teenager, and now, well, “that’s just how I am!” But that’s to make the mistake that this film is Christian’s story. Or even the story of a couple, where, at the very least, the subject of adults negotiating emotional barriers in a sexual relationship is implied and indicated as a possible positive force in the world. The story, though, is Anastasia’s. A girl and her stalker. The woman who watches a man transform in front of her face, not into a “control freak” or as a “manly” figure in a traditionally represented position of power. “Fifty Shades of Grey” is a portrait of a young woman, drawn from her point-of-view, discovering when to say no—even the safe word “red” is eschewed in a pivotal moment in favor of a simple “no”—and when to say yes. “No” can be a turn-on, robed in the avarice of passive-aggressive pseudo-seduction, but not here. Anastasia Steele becomes a woman. Christian Grey? Bimbo. It’s a gorgeous conceit, and I can’t wait to read a raft of writing by smart female essayists about the film, and its cheeky subversion of its tin-eared source material. Now for the sequel where, repeatedly, Anastasia teasingly, cheekily, beguilingly tells Christian “no” when he begs, begs, begs for her to peg him. The fun never stops.