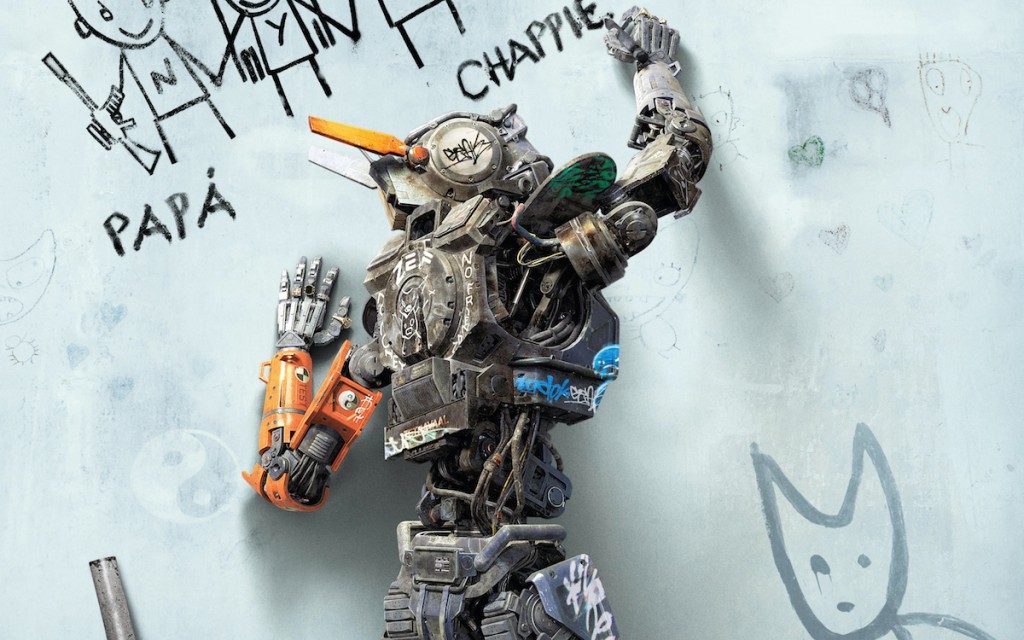 “Chappie” is cheeky. Or, Punk as fuck, or maybe “Zef as fuck.” Co-writer-director Neill Blomkamp’s third Johannesburg-set feature is not the robot movie anyone watching the coming attractions might have expected. (The film’s pre-opening Wednesday-night screenings for critics across the country were followed by a wave of harsh, obstinate commentary on Twitter that meant to kill.) Many of the scenes, plus a wanton vocabulary of variations on “muthafuckah” and “Jesus Christ,” are more purposeful provocation rather than an internationally legible pop fable. (Along with some very suggestive sentiments about the mind-body divide.) The throughline is a kid’s movie-like journey, that of a sentient robot-slash-infant with five days to learn how to live before dying. (Hints of “Short Circuit,” “E. T.,” “Pinocchio,” “RoboCop,” “A.I.: Artificial Intelligence,” and of course, Frankenstein’s monster, among many others, slosh cheekily through the holes in the story.) But Blomkamp (“District 9”) embeds his movie—ostensibly about corporate robot cops taking over crime control in a slightly futuristic Johannesburg— in the music, art and attitude of his fellow South Africans, Ninja (aka Watkin Tudor-Jones) and Yo-landi Visser (aka Anri du Toit), playing exaggerated versions of their personas in Die Antwoord. Their bloody, violent, inventively psycho music videos draw on a vocabulary of “zef,” which Ninja explains to DAZED in their Spring 2015 issue, “We made it into a fucking movement. Zef is like dirt, it’s like scum, there was no zef movement before we came along. It was an insult, it’s like eurghh, talking shit about people. It’s a word made up by non-zef people, Afrikaans people talking shit about their dress: ‘Eurgh that dress is so zef, it’s disgusting.’” Thus, a politicized cry of disgust against the conservative Afrikaans culture, their infernally catchy music, profane gangsta put-on and childlike visual art, makes for a confounding, if lively and lovingly detailed backdrop for their petty gangster ambitions. In recent interviews, Blomkamp has said the failure of “Elysium,” his previous movie, comes down to his fascination with larger ideas and the smallest details. How many different ways, for instance, can you pronounce “robot”? Anderson Cooper, briefly on screen, opts for Rod Serling’s “Twilight Zone” enunciation: “row-Bit.” The walls of a criminal’s lair of an abandoned factory are sketched with childish figures with prominent cocks and balls, and often the cocks and balls are on their own or near one or another word or phrase drawn from Die Antwoord’s image kit—an alien head, a marijuana leaf, a dolphin—plus lots of scrawled “fuck”s. And the lair of Ninja of Yo-landi is established in a palette of chalk-pale pastels even before Chappie the robot is calling them “mommy” and “daddy.” Admirably, the ending provides both a gorgeous, Björk-like image to cap an uneven movie, as well as another shot with two other characters that suggests that the movie we thought we were going to see hasn’t even begun. With Sharlto Copley as the Jar-Jar Binks-like voice of Chappie, Dev Patel as Chappie’s “creator” (cue “Blade Runner” references), Hugh Jackman in a mullet and khaki shorts as an industrial adversary and Sigourney Weaver as an irritable CEO, as well as an awful lot of Sony products, including a Vaio laptop that somehow manages to funnel human consciousness from one portal to another in a matter of minutes. “Chappieconscious.dat” manages to make it through Windows and into a zef new world. 120m. Widescreen. (Ray Pride)