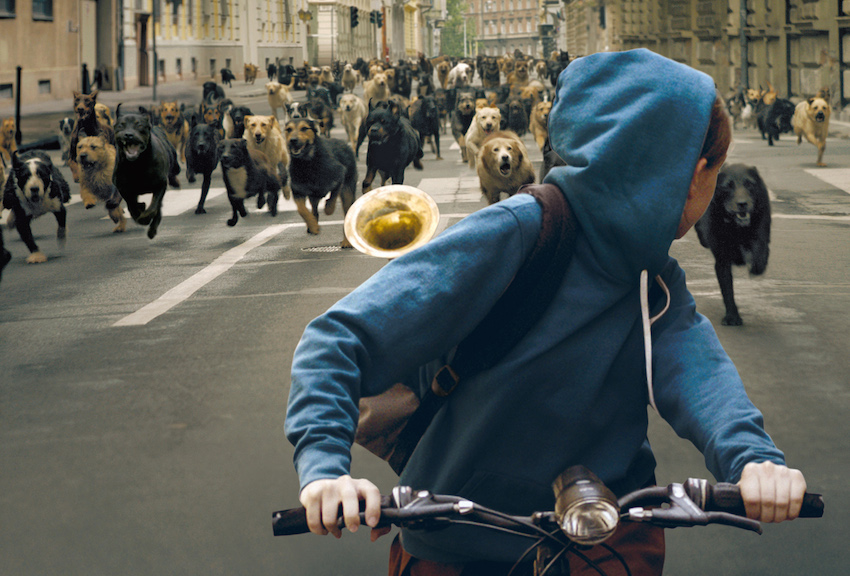 In multiple countries in greater Europe, right-wing parties have risen to power, perhaps to most dramatic effect in contemporary Hungary. In Kornél Mundruczó’s fantastic and often fantastically beautiful, Budapest-set revenge parable, there may or may not be useful allegory in the casting out of thirteen-year-old Lili’s dog, Hagen, for being “unfit” as a mixed-breed dog. Both Hagen and Lili search for a return to “home,” and for each other, but in the meantime the once-domesticated dog rounds up a canine cohort to face the cruelty that is the human race. It’s a child’s tale, in a way, but with hundreds and hundreds of extra sets of teeth. Mundruczó’s camera is itchy, moving, darting, as if sniffing, a “shaggy dog” approach, little nudges and sneaks ever so closer in scenes where the dogs move closer to war with mankind. Much of the last half hour is a ruthless visceral thrill, a doggy dystopia, trained choreographed and edited without CGI and with a brisk, offhanded enthusiasm that puts a nice-sized chunk of the “Marvel universe” to shame. There are bursts of vital, violent imagery that rest cleanly in George Miller-“Mad Max” territory. The ending, paying off a music-hath-charms refrain throughout the movie, a feat of true genuflection, is as beautiful as it is absurd. Mundruczó has said his movies are all genre variations, and “White God,” he writes, “can be described by mingling the words adventure, revenge, rebellion and heroism. I wanted the conventions of vengeance films and the allegorical qualities of animal stories to merge in this film in a dynamic, thrilling and undeniably emotive way.” The title isn’t explained; it could be a reference to Samuel Fuller’s 1982 blunt canine abuse classic, “White Dog” as well as to the abounding racial metaphors. “The White Man has proved countless times that he is only capable of ruling and colonizing,” Mundruczó writes. “The linked words of the title harbor many contradictions, and that’s why I found it so fascinating.” “White God”’s got bite. With Zsófia Psotta, Sándor Zsótér, Szabolcs Thuróczy, Lili Monori, Laszlo Galffi. 119m. (Ray Pride)