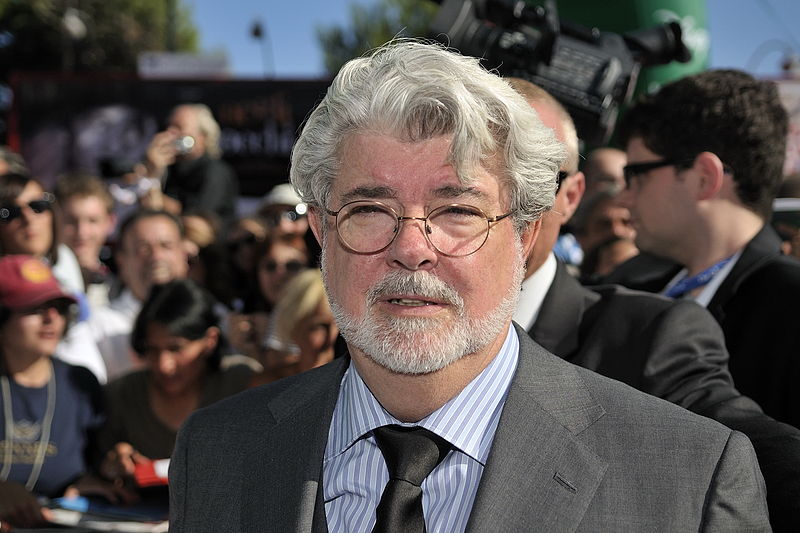 Growing up in Modesto, California, George Lucas fell in love with building cars and “didn’t do that well in high school.” After surviving a car crash while racing in 1962 the elder filmmaker had a “touch of understanding about the world” that would serve him through the long career ahead of him. “Life is an illusion. You make it be what you want it to be, but you have to actually believe it… maybe there’s a reason why I survived.”

The grey-bearded survivor gave a talk to students at a closed event on April 15 at the School of the Art Institute, interviewed by Walter Massey, the school’s president, as well as a theoretical physicist. Lucas said it was chance that led him to the University of Southern California, which was one of the country’s first film schools. Lucas’ first film, a sixty-second montage of iconic 1960s youth culture photographs set to a percussive soundtrack, won at film festivals around the country. “I thought, hey I know how to do this,” Lucas said. He called his fellow students “misfits” because their chances of working in the Hollywood of that era were zero. But that was all right with Lucas and his fellow misfits: ”All we wanted to do was make movies; we weren’t interested in a career.”

Not only was Lucas not a careerist, he actively “disdained Hollywood.” He made modest art films and told his instructors that movies should not have plots or characters but instead be about pure movement. After stints working as a film editor and film teacher for the U.S. government Lucas found himself at Warner Brothers on a fellowship to observe filmmaking. The studio was producing a single film at the time, Francis Ford Coppola’s work-for-hire musical “Finian’s Rainbow.” Coppola and Lucas became friends and collaborated on subsequent projects. After Lucas’ Warner Brothers film “THX-1138,” a bold, austere, yet depressing science fiction film, failed at the box office, Coppola produced Lucas’ studio feature, 1973’s “American Graffiti.” In an interview with Bill Moyers, Lucas paid tribute to Coppola’s influence: “In film, Francis Coppola became my mentor and taught me how to write screenplays, taught me how to work with actors.”

Lucas said that persistence also played a role in his eventual success in the film industry. “You simply have to be persistent and not listen to ‘no.’” The self-described “control freak” said, “I want everything to be my way. I’m a micromanager.” Still, in the end, he said, “the patron decides. Art has always had patrons, whether it’s a gallery, a museum or a wealthy individual… and the patron usually doesn’t know what they’re talking about. You have to accept that you’re going to have a lot of unfortunate, misinformed or untalented people telling you what to do.” Lucas says that’s why, since “Star Wars,” he’s been the rare artist who invests in his own projects. But without financial independence, Lucas told the students, “If you’re doing something they’ve never seen before, you’re in serious trouble.

“Ultimately, I’m a curious person, and I have no fear of technology, and art is technology,” Lucas continued. Artists and scientists alike have a vision of what they want to accomplish, and they must invent the technology to realize it. “Star Wars” made innovations in puppetry and moved visual effects “beyond the technological glass ceiling of the time.” These efforts were all in the interest of telling a story, and Lucas’ new hope is to raise a monument to the crafts that are integral to contemporary narrative art. “I’m a popular artist,” Lucas said. “We don’t get paid as much, we get scorned and made fun of.” Narrative art, in Lucas’ opinion, gets short shrift. Until the end of the nineteenth century, he said, narrative art played an integral role in society. “It was propaganda for the church or the state… it was designed to keep society together… it motivated people to follow a leader into war or to believe in some deity.

“I have a very strong feeling that art is in the eye of the beholder,” Lucas said of the art world’s move away from narrative art after the advent of Modernism. “Narrative art is a valid art form.”

The prospective museum, which Mayor Emanuel hopes to situate on prime lakefront land if current lawsuits are surmounted, would include Lucas’ accumulated holdings of work by Norman Rockwell, Maxfield Parrish, M. C. Wyatt, as well as more modern illustrators, comic book art, and historical pieces such as a Grecian urn showing the battle of the 300. But, as one might expect, the collection would also contain artifacts from the movies, including set designs, costumes and props. There will, Lucas said, be spaceships, futuristic cars and monsters, but it will not only be “a ‘Star Wars’ museum. We have things from the ‘Wizard of Oz,’ ‘Casablanca,’ ‘Lord of the Rings.’ It’s about how, for example, they designed the swords in different movies to reflect a specific character.” The museum will also include a section on visual effects and one of digital art, of which he claimed, “I started this six years ago, and nobody knew what I was talking about,” he said. “We want to show how it’s been made into a medium.”

Massey noted that the proposed location of the museum is near Soldier Field in Chicago. “I tried to build it in my hometown of San Francisco,” Lucas said, “because I wanted it to be in a park, and I wanted to have other museums near it… but ultimately they just said, ‘No, we don’t want a museum there. Your mayor came and said we really want the museum here [even] before San Francisco had said no, so I moved [the prospective project] here.”

Wherever Lucas’ collection finds a home, what makes narrative art important, he asserted, is that it is not designed for elitists. “Elitists said, ‘We determine what is art and what’s good and what’s bad,’ but there are no deciders of what art is. That’s just something people have built up to make themselves feel better. If you’re moved by it emotionally, it’s art.”

Hello, I have a HUGE story here that must surface. In the book, The Lucas Effect, page 282, The art work of Maxfield Parrish directly inspired the feel and look of Star Wars films! I own the last documentary film footage and evidence of that iconic estate art studio that Parrish built. This was where the masterpieces were created with his faithful and loyal, servant and friend, Sue Lewin and what I own has more to do with her. She is art history, wrongly titled. The historic Parrish art studio was senselessly destroyed, I own that film and it is… Read more »