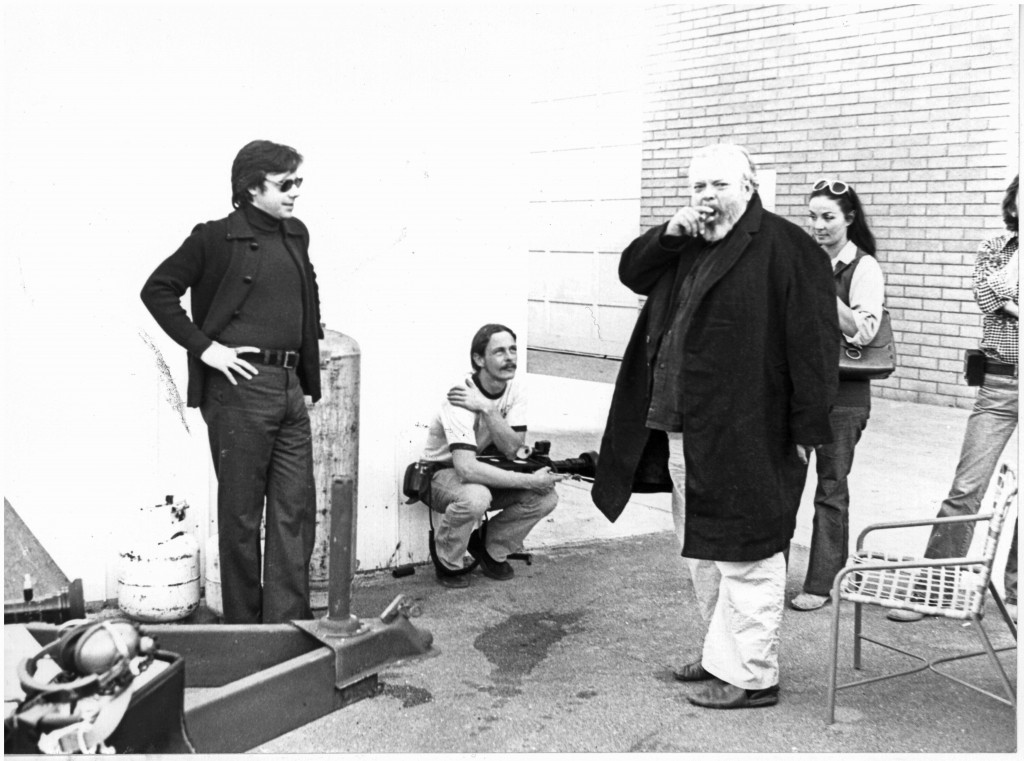 When I finished gorging on Josh Karp’s “Orson Welles’s Last Movie: The Making of The Other Side of the Wind,” the late great director’s cryptic title was both fragrant poetry and flagrant prophecy, a sparky introduction to a film maudit no one would likely ever see. The book was released the Tuesday before Welles’ May 6 centenary, now amplified by May 7’s announcement of a $2 million Indiegogo campaign to complete a feature-length version of Welles’ long-in-the-not-finishing final film, drawing on a trove of 1,083 elements, including the immaculate negative, that reportedly weighs more than a ton-and-a-half.

Welles started his project forty-five years ago; he’s been dead for thirty of those. I recently asked Karp how long he’s been working on his often-rollicking, sometimes-detail-oriented tome on Welles’ parallel satire of Hollywood insiders and European art film of the era. “I think I signed the book deal in mid-2011 and the book was essentially done in Fall 2014,” the Northwestern lecturer and onetime Newcity contributor tells me, “So it was three years, give or take a few months. In my mind, it was going to take two years. I always think that, and it’s always three or three-and-a-half.”

Karp indicates he’s a non-film guy, non-Welles specialist in the book. There had to be a germ that started him off. “I was working on my second book [“Straight Down the Middle,” on golf], in the middle of it and having that weird crisis where you think, ‘Okay, this is never going to work, this isn’t a book. I’m dead.’ Then you try to stave that off with a distraction. In my case, it was a book that I can no longer remember, probably one of the Welles biographies that had a few stories about ‘The Other Side of the Wind.’ I’d heard of the movie before, a few good stories here and there. I think in this case, there were two really good ones: the one about John Huston driving the wrong way on the highway [during a guerrilla shot] and the other possibly when Welles (about five years into production) got insanely frustrated and screamed, ‘Who do I have to fuck to get off this picture?’ and it occurred to me, well, he was directing and producing, I guess he kind of had to fuck himself?

“In retrospect, those were two of the three strands that made me realize this was a great story and one I wanted to work on,” Karp continues. “First, there were great, incredible, insane, hilarious stories from the set. Which was great and I started digging into it more and more, finding different stories all over the place—and most of them were just terrific. But, there was also this question of what it all meant at the risk of being crude, this question of him having to fuck himself. Or maybe put in a better way, I had this sense that while the film wasn’t strictly autobiographical—there was this way in which the whole thing felt a little bit like Stephen Colbert’s portrait of himself standing in front of a portrait of himself, standing in front of a portrait of himself, and so on endlessly. I thought that was just incredible. This guy who as the greatest artist of all time possibly getting lost in his own creativity and process making a movie that’s about people making a movie about a guy who is making a movie—and casting it with [film] people he knew, frequently playing some version of themselves and in some cases acting out storylines that mirrored their relationships with Welles, but all under the guise that it wasn’t about Welles. It was such a great mystery and one that seemed like it had the potential to have great meaning.”

The John Huston stories, even in the slightest slivers, are as tasty as the extended Welles buffet. “Yes. The last thing was that it was Orson Welles and John Huston, in an incredible adventure that hadn’t really been fully told anywhere. While not a film expert or a Welles scholar, I love Hollywood stories and have always read other people’s books about larger-than-life old Hollywood characters or stories and thought, ‘Shit, there’s another one I won’t get to write.’ I guess, meaning, that there are only so many of those stories and characters to go around. Nobody is going to need another biography of Bogart, Spencer Tracy, Cary Grant, Huston or Welles. But, this gave me the chance to write a book about these two extraordinary, brilliant, outsized characters before someone else did. I figured it might be my only or last chance to do so and I knew that I could be very happy to spend the two or three or four years of work it would require as long as those were the guys I got to write about.”

So the bottom line? “I was drawn in by great stories, I sensed that there was something really meaningful about a great artist within the story and a mystery to be explored, while I could write about two of the most interesting men in Hollywood history. Bottom line? I’m very lucky to be the person who got to write this book and cover this story.”

Karp’s book is out now. “The Other Side Of The Wind” is promised by the end of 2015, edited by Affonso Goncalves (“Beasts of the Southern Wild”), working with Welles’ notes and the input of co-star and Welles acolyte Peter Bogdanovich.