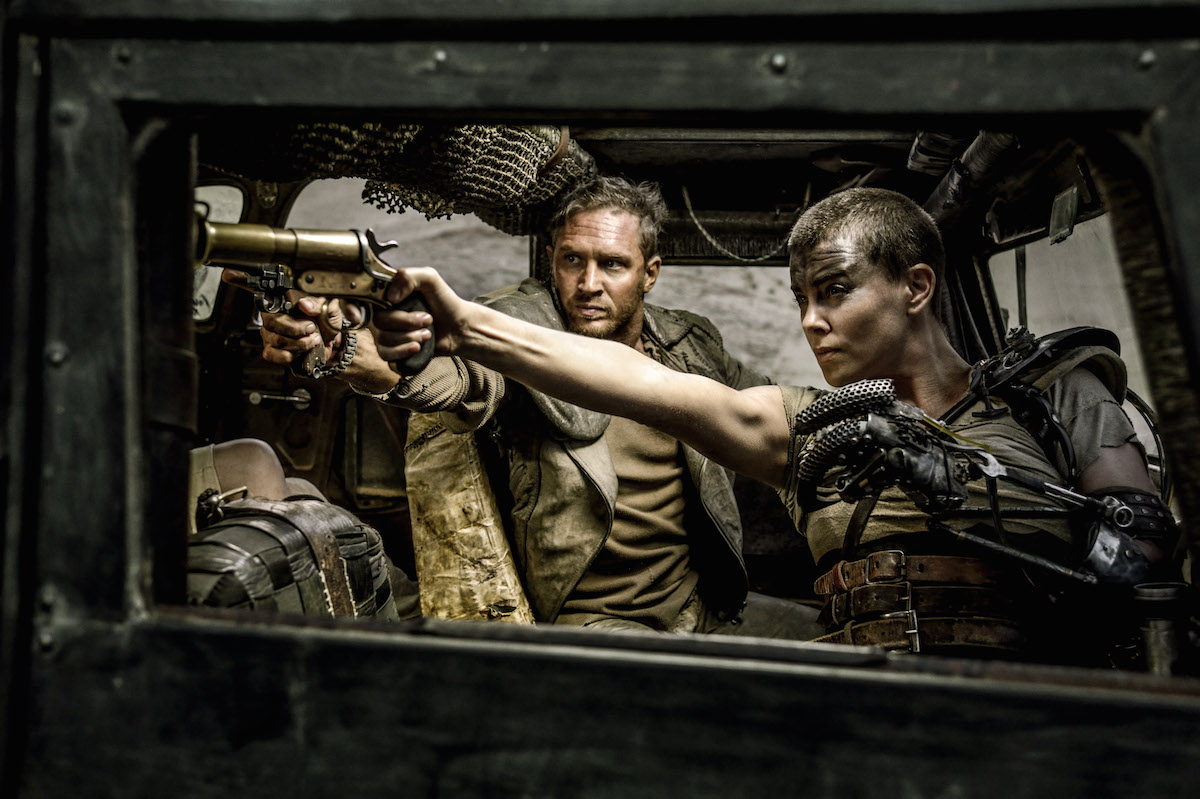 “At night we ride through the mansions of glory in suicide machines”: Bruce Springsteen’s lyric from the “Born To Run” album is but one of so, so many cultural touchstones readily cross-referenced and layered upon the layer-upon-layer construction of “Mad Max Fury Road.” So there’s sound, percussive, restless and singular fury, but does it signify an expressionist masterpiece? Possibly. Pretty much. Okay. Okay. Yes. And the wild trailers and commercials give you almost no idea how sleek yet rude, near-mute yet politically assertive a movie can be. But first, the mayhem: “We don’t defy the laws of physics: There are no flying men or cars in this movie,” seventy-year-old co-writer-co-producer director George Miller says of his brilliant challenge to other makers of contemporary cinema, his first live-action film in over a decade, built from 3,500 storyboards and 2,700 cuts in just shy of two hours. (1981’s “Road Warrior” had a bucolic 1,200.) Since seeing this immaculately detailed, onrushing go-for-baroque manifesto, waves of orgiastic praise have washed over it from all corners. The most terse: J. G. Ballard notoriously dubbed “The Road Warrior” “punk’s Sistine Chapel”; invaluable Vulture critic Bilge Ebiri nodded to the novelist in tweeting out “Fury Road” as “the Sistine Chapel of action filmmaking.” To which I add: headlong, berserk, bonkers, batshit, boisterous, bountiful and big-hearted. The monumental valleys of the Namib Desert passing for the Australian outback, a backdrop of bold screaming color, its teeming denizens all seem sickened by radiation poisoning to one degree or another. But beyond the masterful motion, the linear but so-dense canvas, the near-faultless spatial acuity of each action setpiece, the frenetic and terrible beauty of the maniacally precise physical detailing, Miller’s politics also shout. There are kinds of chattel in the world and the future we have prepped for ourselves: water, oil (or “guzzolene,” as it’s called here) and chattel. Mad Max’s forward propulsion—not to call it a journey—is in the service of the escape of Imperator Furiosa (Charlize Theron, skull cropped, cheekbones often streaked with black oil, equipped with a prosthetic arm) with a procession of fertile women she’s caravanning beyond the wasteland to the green landscape of her youth. Max joins a revolution in the service of woman, and of the future they might build from the ashes of a masculine Inferno. “Look at them,” a character admires, “So shiny. So chrome.”

The likenesses you could (and should) impose on this floodstream! The detritus of our civilization, of many civilizations, of Civilization: Details upon details, from each costume to every jammed-together vehicle fashioned from objects that all reek of totem and icon and fetish. John Ford, Terry Gilliam, Budd Boetticher, Buster Keaton, Jean-Pierre Jeunet, Peter Weir’s “The Cars That Ate Paris,” “Salo,” “Grand Theft Auto,” “Cannonball Run,” Chuck Jones, H. B. Halicki’s original “Gone in 60 Seconds,” Fritz Lang, Bogart, Keaton, Bruegel, Bosch, punk, steampunk and on and on and furiously on.

Madness is violence and violence is life and life is madness and the cycle does not abate until death. “Fury Road” is not so much pessimistic but cheerily brutal, as, you have to admit, “Babe: Pig in the City” and “Happy Feet 2” are for the messages they leave the kiddies of generations. George Miller in three sentences: We’re doomed. Keep moving. Be kind. Plus: Armageddon out of here! With Nicholas Hoult, Hugh Keays-Byrne, Zoë Kravitz, Rosie Huntington-Whiteley, Riley Keough, Abbey Lee, Courtney Eaton. 120m. Widescreen. (Ray Pride)