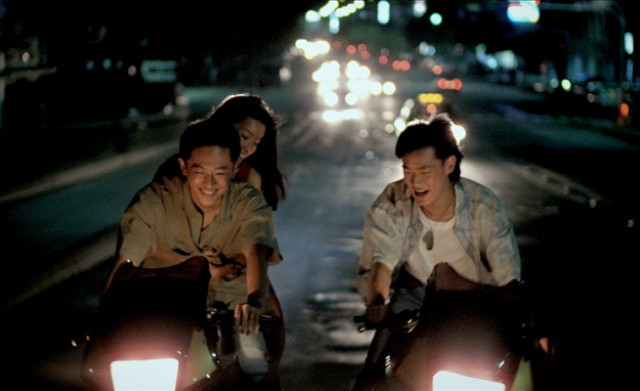 An old story on a new island that would grow to be an auteurial continent, Tsai Ming-Liang’s 1992 “Rebels of the Neon God” faintly resembles “Rebel Without a Cause” recast in an impossibly wet, loud and despairing Taipei, Taiwan. The depressing familiarity of story suggests that teenagers—or the filmmakers who invent them—are a nationality unto themselves. The characters, including a student, two petty-thief brothers with a flooded apartment, and a roller-rink hostess, commit petty crimes and suffer self-inflicted indignities amongst din of traffic, video games, roller-rink music, cheeky pop. Homoerotic undercurrents surface: family can’t help, love is unlikely. But the spare visuals are lovely, such as a footchase through the exotic neon tackiness of Taipei street markets, and light that plays off a flooded apartment floor rippling over darkened walls. Tsai’s essential visual vocabulary came nearly fully-formed. 108m (Ray Pride)

“Rebels Of The Neon God” plays at Siskel in a digital restoration June 6, 9 and 10; a 35mm archival print will be shown June 7.